Over the past seven months, the biotech sector has sunk into its deepest bear market since the financial crisis. This part of the market is down some 40% from its previous peak in July.

However, there are some rays of sunshine starting to peak through the clouds. Small cap biotech stocks turned in a very solid performance last week, actually outperforming their larger-cap brethren for one of the few times this year.

[ad#Google Adsense 336×280-IA]One key reason for that this is not receiving much press is that the high-yield credit markets also known as the “junk bond” markets are healing.

High-yield credit spreads are back to where they were to start the year and a record weekly amount of new money went into high-yield bond funds last week.

This is one reason small caps overall had a nice week with a particular strength in biotech.

I had many small caps in my portfolio like Agenus (NASDAQ: AGEN), Merrimack Pharmaceuticals (NASDAQ: MACK) and Omeros Corporation (NASDAQ: OMER) up some 20% last week from this swing in sentiment.

Although I am encouraged by the action in the small cap part of the biotech space last week, the majority of my “dry powder” continues to be deployed to the large cap core holdings that should make up 50% to 75% of one’s biotech portfolio depending on the individual’s risk preferences.

There is simply no reason to move out on the risk/reward curve until more signs emerge that sentiment has permanently shifted into a “risk on” mode in the sector once again.

Besides, large biotech stocks are very attractive here after the big declines triggered by the recent bear market. Large cap biotech equities are selling at their lowest valuations since at least 2011. These names usually trade at a premium to the overall market multiple. Currently, many trade at a discount and some trade in bargain basement territory.

In addition, some have become “accidental” high-yielders. The sector has never been known for its income stream, but lately, some biotech stalwarts have become good dividend plays as well as good growth and value stocks. Here are a couple of these large cap stocks that I own in bulk and have been adding to within my own portfolio that have become nice yield plays. 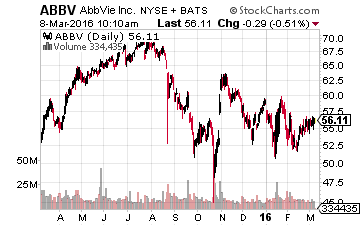 Let’s start with AbbVie (NYSE: ABBV) which continues to be one of the best combinations of growth, value, and yield available not only in the biotech sector but in the market as a whole.

AbbVies dividend yield is now north of four percent thanks to recent declines in its share price.

The company also has a robust growth component as earnings should rise by 15% to 20% both in FY2016 and FY2017. The company continues to benefit from robust sales growth from its blockbuster drug Humira which should do some $15 billion in global sales in 2016.

AbbVie also has a deep and evolving pipeline as its soon to be blockbuster blood cancer drug IMBRUVICA it shares with Janssen continues to be approved for additional indications of cancer. Finally, the stock is very cheap at just over 11 times this year’s expected earnings. 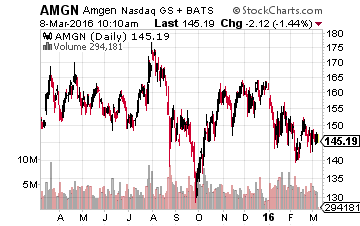 Amgen (NASDAQ: AMGN) is growing slower than AbbVie and its dividend is lower but it is still a good play here.

The company is not as dependent on any one drug as AbbVie with several multi-billion dollar products.

Amgen is also emerging as a biosimilar powerhouse with five products that should come on the market between 2017 and 2019 that could generate some $3 billion plus in revenues a few years out. The biosimilar market overall is expected to produce over $30 billion in annual sales within a decade.

Earnings should continue to plod along with approximate 10% annual growth in the years ahead on the back of revenue gains in the mid-single digits. The company recently hiked its dividend payout by more than 25% and now yields 2.75%. Given the company’s fundamentals and dividend, it is too cheap at 13.5 times this year’s earnings per share especially in a market selling for 16 – 17 times earnings. 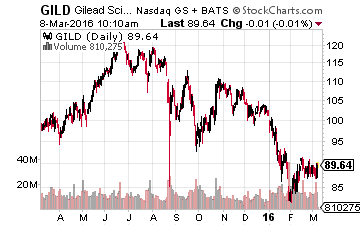 Finally, we have Gilead Sciences (NASDAQ: GILD) which is selling at less than seven times FY2015’s earnings per share.

Investors are overly concerned about coming competition in the hepatitis C market which Gilead currently dominates and will continue to do so.

True, sales will be roughly flat this year after exploding on the blockbuster success of hepatitis C treatments Sovaldi and Harvoni. However, the company should have approximately $15 billion in free cash flow this year giving the stock a free cash flow yield of over 10% which is almost unheard of in this market.

The company recently hiked its dividend 10% but is deploying the bulk of its free cash flow into buying back its stock at these dirt cheap valuations. At current levels, Gilead is buying back more than one percent of itself every month in the market. With the recent pullback in the biotech sector, I would also look for the company to make at least one significant acquisition in 2016.

This is something analysts have been clamoring for and could well result in a higher multiple for the stock once announced. In the meantime, an investor can collect a two percent yield while the company continues to buy itself on the market and consistently beats analysts’ quarterly earnings estimates.