It’s a one-two punch I love to see in a stock: a growing dividend and a rock-solid commitment to research and development.

These companies serve up a profitable combo: immediate cash in your pocket and potential for huge gains—and even bigger dividend payouts—as they churn out the next wave of must-have products.

[ad#Google Adsense 336×280-IA]I bring this up because right now, S&P 500 companies are spending big on both R&D and dividends.

The bottom line? Now is a great time to shop for these income-focused innovators, particularly with the selloff driving their prices down—and their dividend yields up.

Even better if you zero in on companies tapping into trends that will change society forever, like the stunning growth of mobile payments.

If you haven’t already paid for something with your smartphone, you probably will—and soon. Research firm eMarketer sees mobile payments spiking 210% in the US this year, to $27.05 billion from $8.71 billion in 2015.

That’s to say nothing of China, where Apple (see below) launched its Apple Pay service last week, with Samsung Electronics (SSNLF) hot on its heels.

Here are three companies leading the mobile-payment race. All are boosting their dividend payouts and investing in the cutting-edge tech they need to dominate in a tap-and-pay world.

SBUX doesn’t break out its R&D spend, but there’s no doubt it’s putting serious coin into its mobile efforts. The latest evidence? Its Mobile Order & Pay app, through which you can order your java fix from your phone and pick it up at a nearby store.

That makes for shorter lineups, which means fewer customers wandering off to a competitor. Coffee drinkers have been quick to adapt, submitting an average of six million orders a month in Q1.

Starbucks’ dividend is also on a sugar high, jumping 208% in the past five years. The stock’s modest 1.4% yield masks that growth, because the share price has kept pace. 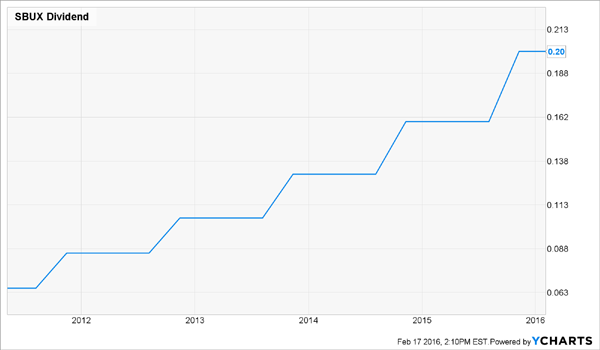 Which brings me to why the coffee giant didn’t place higher on my list: its extra-strong valuation. It trades at 26.1 times its forecast fiscal 2016 earnings, well above the five-year average of 23.4 and the S&P 500’s forward P/E ratio of 15.3.

But I’m keeping my eye on SBUX—and I’ll be tapping the buy button on any significant pullback.

But users have been slow to climb aboard, partly because retailers have held onto older point-of-sale terminals. Thankfully that’s changing, due to something hardly anyone is talking about: the so-called “liability shift,” which kicked in last October.

This means merchants without POS systems capable of taking chip cards will be on the hook for fraudulent transactions, not the card issuer. That’s a big incentive to upgrade, and these new setups will drive a big jump in mobile payments.

Meantime, Apple’s valuation is a mirror image of Starbucks’: it trades at 9.6 times forward earnings, well below the S&P 500 and the stock’s five-year average of 11.1.

The company’s dividend has been on a steady upward climb since it initiated it in 2012, rising 37.3% on a split-adjusted basis. The stock yields 2.2%, and the iPhone maker complements its payout with big buybacks: in the past three years, it’s taken its share count down by a whopping 15.6%.

Apple’s R&D spend has also surged 232% in the past five years, and that bodes well for the new iPhones, iPads and Apple Watches it will release in the months ahead. 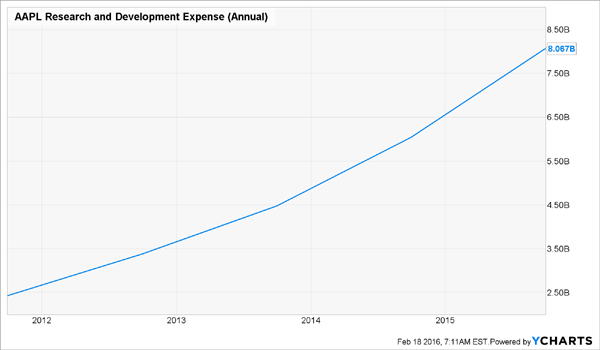 But the stock is still not the best play on mobile payments. That’s because, despite Apple Pay’s fast growth, it’s still only a small slice of the company’s business.

That’s where my No. 1 pick stands out.

Visa Inc. (V) runs world’s biggest electronic-payment network, with the average number of transactions clocking in at 150 million a day.

It’s wasted no time leveraging that edge. On February 12, it revealed details of its stake in Square Inc. (SQ), which makes an adapter that lets you process debit and credit card transactions through a smartphone.

Visa owns 1% of Square through class B shares, which don’t trade publicly. That doesn’t sound like much, but if it chose to convert those to publicly traded class A stock, its interest could jump to 10% of the class A shares.

Here’s the funny thing: Visa made this investment five years ago, when Square was a startup. That shows you how far ahead of the curve the company is.

Meantime, it’s plowing ahead with innovations like its Visa Digital Solutions package, which makes mobile payments safer, and Visa payWave, a tap-and-pay system for cards and mobile devices.

As I wrote in January, one of the best things about Visa is its “middleman” approach: it simply charges a fee for using its network and doesn’t issue cards or lend money. That’s different from American Express (AXP), which operates more like a bank.

On the surface, Visa’s 0.79% dividend yield doesn’t look like much to get excited about, but like Starbucks, that’s only because the stock has been on a tear. On the dividend-growth front, Visa tops the coffee slinger with a payout that’s surged 278% in five years (split-adjusted).

To be sure, investors are expecting big growth out of Visa, which is why they’ve bid up its forward P/E to 21. But that’s justified: the company’s payment volume jumped 12% in the latest quarter, and the steady march toward a cashless society means there are plenty more taps and swipes where those came from.

This 7.5% Dividend Is About to Double [sponsor]I’ve uncovered a recent spin off tapping into the aging baby boomer profit tsunami. It pays 7.5% today and the yield is expected to double fast. Recent pullbacks have created the perfect buying opportunity just in time for the next dividend payout. Click here to learn more about this stock and the Billionaire’s Secret we used to find it…