To say that the global economic outlook is bad and deteriorating is like saying Cam Newton faced “some” pressure from the Denver defense in Super Bowl 50. It is a vast understatement. Markets have gotten off to a very rocky start here with the S&P 500 down over five percent in January which was its 10th biggest loss in an opening month of a year in its long history.

The sell-off has continued in February through the first two weeks of the month. The main indices are now solidly in correction territory.

[ad#Google Adsense 336×280-IA]However, that performance looks pretty darn good compared to what is happening across the globe. Markets in Europe, Japan, and China are in official bear market territory.

Emerging markets in South America like Brazil are in free fall. Banks in Europe are selling where they were in the financial crisis.

Two things caught my eye in the week that just past. The first were comments from Maersk, one of the biggest shipping companies in the world.

Its CEO called the current activity in global trade worse than that during the height of financial crisis.

JP Morgan then came out and stated they would not be surprised to see other central banks follow the Bank of Japan with their own negative interest rate policies. This speaks to how much of a problem a deflationary spiral could become if global economic activity continues to deteriorate and commodity and oil prices continue to collapse.

Domestically, things are holding up quite a bit better. The recent Jobs Report came in weaker than expected but we still saw a net gain of over 150,000 new jobs in January. Auto sales are still robust and housing also is slowly improving. Both the Federal Reserve and the White House are projecting GDP growth of approximately two and a half percent in 2016.

The Fed has been too optimistic on its initial economic assumptions throughout the weakest post-war recovery on record and the office of the president obviously has reasons to see the economy through rose colored glasses in an election year. However, GDP growth of 1.5% to 2% outside a major geopolitical event does seem like a reasonable bogey for 2016.

While the outlook for the domestic economy is hardly robust, the United States still is looking like the best house in an increasingly cruddy global neighborhood. I am finding myself investing a good portion of my “dry powder” on the dip in the market in domestically orientated plays that are insulated from lousy overseas economic activity and the strong dollar. 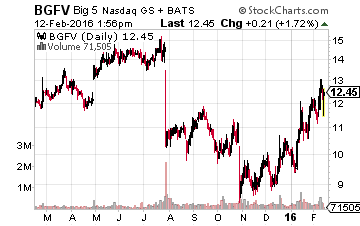 Big Five Sporting Goods (NASDAQ: BGFV) is one name that recently popped back on my radar screen for at least a short-term trade.

In 2015, an activist won some board seats and recent results have shown some improvement.

The sporting goods store should marginally benefit from the upcoming bankruptcy of competitor Sports Authority.

More importantly given a good portion of its store base in California, it should benefit by better weather conditions. That region has gone through five years of drought but thanks to El Nino received the highest snowfall in years which should boost outdoor equipment sales.

In addition, given this is an election year expect escalating rhetoric around “gun control” in 2016. This always spurs gun and ammo sales, a major component of the overall sales mix. Stifel Nicolaus just upgraded the stock and it also has a juicy 3.5% dividend yield. 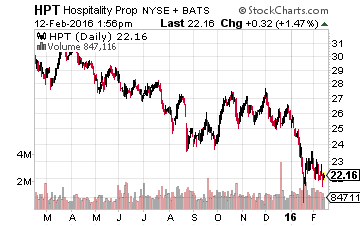 My regular readers know I am a big fan of lodging REITs after their recent 30% to 40% sell-off especially given low 10-year treasury yields.

Here is another one I like and own, Hospitality Properties Trust (NYSE: HPT).

This entity owns approximately 300 hotels in 38 states as well as nearly 200 travel centers. FFO (Funds from Operations) should be up 10% to 15% year-over-year in FY2016 and this REIT yields nearly nine percent. The shares are too cheap at six times forward FFO.

Some of the homebuilding stocks have sold off along with most of the market recently. Given that housing starts just turned in their best year since 2007 but are still significantly under their 30-year annual average, this seems to be an overreaction, to say the least. 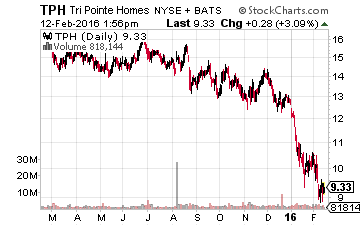 The name might not be known to most investors even if it is a top ten homebuilder, but its local brands like Maracay and Trendsetter are probably known to residents primarily in the Southwest.

This homebuilder is on track to double earnings in FY2015 and the consensus sees another 10% to 15% increase in FY2016. The company has easily surpassed earnings expectations each of the past two quarters and reports again towards the final days of February. Given its growth, the stock is too cheap at under eight times this year’s earnings.

Although one has to be cautious on the global economy given the rocky start of the year, these domestic-focused companies are offering great value and have businesses unaffected by the turmoil happening overseas.