As we head into the final innings of 2015, the major equity indices are showing low single-digit losses for the year with the exception of the NASDAQ which is up slightly. It has been a bifurcated market for most of 2015.

[ad#Google Adsense 336×280-IA]Unless you had a heavy dose of the FANG stocks (Facebook, Amazon, Netflix, Google), your portfolio is at least slightly underwater for the year.

Of the 3000 largest stocks by market capitalization, some 65% are down 15% or more from their yearly highs as of this weekend.

Luckily, the leaders from one year rarely see their outperformance carried into the new one especially if they have stretched valuations like most of 2015’s market leadership does.

With that in mind, I offer up some selections that should post some significant gains in 2016 even in a market I see being flat again overall in the New Year. 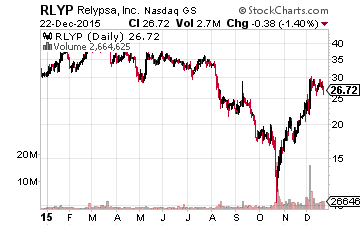 The name of the compound is “veltassa” which is a potassium binder that treats a widespread condition called hyperkalemia (excessive potassium in the blood).

The potential annual market is projected to be some $2 billion annually.

Relypsa’s primary competitor in this space is ZS Pharma (NASDAQ: ZSPH) whose competing hyperkalemia drug “ZS-9” should be on the market sometime this summer. Relypsa has first mover advantage and its drug is better for patients with high blood pressure which is a significant portion of the hyperkalemia population.

Relypsa was selling north of $40.00 a share earlier in the year before plunging to under $20.00 a share. The shares have been rallying of late and go for approximately $28.00 now. The trigger for the earlier decline was the overreaction to a “black box warning” the FDA gave along with the approval of veltassa. This warning will likely only apply to five to 10% of hyperkalemia population and ZS-9 possibly could get the same warning label when it is approved.

In addition, ZS Pharma was acquired in early November by drug giant AstraZeneca (NYSE: AZN) for $2.7 billion. A similar valuation based on the two companies splitting the hyperkalemia market shows Relypsa woefully undervalued.

The company has obviously been the conjecture of much takeover speculation since ZS Pharma was acquired. Buyout targets of up to $75.00 a share have been bandied around. I believe Relypsa will move higher in 2016 with or without a buyout offer just on the back of expanding veltassa sales. 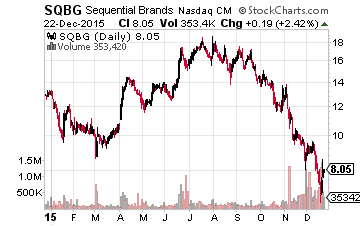 Next up is Sequential Brands Group (NASDAQ: SQBG).

This brand manager and licensor of myriad retail products has been punished due to poor sales throughout the retail sector and building inventory levels heading into Christmas.

Investors seem to be forgetting that Sequential does not hold inventory or manufacturer products.

It markets its various brands and gets a royalty percentage off of every sale. The stock goes for $8.00 a share after being up over $18.00 a share earlier in the year. I have recently doubled my stake in Sequential on its pull back.

The company is going to be transformed by the integration of the Martha Stewart Omnimedia (NYSE: MSO) group when that purchase closes in early 2016. Management recently upped its guidance based on incorporating Martha Stewart’s brands within its own portfolio.

Revenues are expected to jump from approximately $85 million in FY2016 to some $150 million in FY2016. EBITDA should move from just over $50 million this year to north of $90 million next year. Three years out the company sees $250 million in annual revenue and $175 million in EBITDA. For a company with a market capitalization of just $650 million, that is a major growth trajectory. If Sequential comes anywhere close to hitting those projections, the stock is a double or triple from current levels two to three years out. 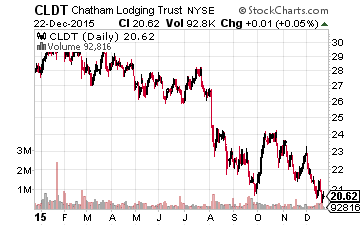 For investors who want some nice dividend yield to go with their growth, the pullback in hotel real estate investment trust Chatham Lodging Trust (NASDAQ: CLDT) offers great value after declining about a third from its highs earlier this year.

REITs have been hurt on concerns about rising interest rates in front of the Federal Reserve’s first interest rate hike since 2006 earlier in December.

High-end hotels have also been impacted by the slowdown in foreign visitors thanks to the strong dollar.

However, given that the global economy is seeing the weakest demand levels since 2009 and tepid domestic growth, it is hard to see interest rates spiking in 2016. The most likely scenario is that the Federal funds rate moves up to one percent from a current .25% by the end of 2016. This will be easily manageable.

In addition, Chatham’s stable of mid-market hotels has relatively few foreign visitors. The company will continue to benefit from the integration of a major acquisition. Funds from Operations (FFO) will be up more than 20% in FY2015 and probably an additional 15% increase is in the cards for FY2016. The shares pay almost six percent via a monthly dividend payout and the stock goes for just 7.5 times forward FFO; cheap on any measure.