It is hard to believe the holiday season is already upon us and the New Year is right around the corner. It has been a tough year for investors even as the major indices are largely flat for the year.

The only exception has been the NASDAQ which has posted returns in the high single digits thanks to the likes of Netflix (NASDAQ: NFLX) and Amazon (NASDAQ: AMZN).

[ad#Google Adsense 336×280-IA]Most stocks are down for the year as equity leadership has been very narrow in 2015.

We have seen a lot of blowups and underperformance from many sectors since the Federal Reserve took the quantitative easing training wheels off the market in November.

This is also impacting Canada and Mexico, two of our top three trading partners.

This is one reason that transports are deeply underwater this year despite plunging fuel prices which are a major part of their operating costs. Small caps have also significantly underperformed their larger brethren in the S&P 500 despite much less exposure to the impacts of the stronger dollar and the weakest global economy since 2009. This is also the first time since 2009 that overall profits within the S&P 500 have fallen year-over-year.

I wish I could be more like jolly old Saint Nick this holiday season rather than sounding like Krampus. Unfortunately, the outlook for the global economy and the stock market is hardly rosy as we head into the New Year.

The latest major concern for the markets that few retail investors are aware of is the turmoil in the high yield credit markets.

Credit spreads are widening as the collapse in the mining and energy production industries take their toll. Default rates for this $1.3 trillion part of the credit market has gone from 2.1% in 2014 to 2.6% so far in 2015. The default rate is projected to jump to at 4.5% in 2016 with over 10% of the total amount of high yield energy bonds expected to hit default status.

Given that I think earnings growth is probably going to come in at just mid-single gains in 2016 in the best case scenario, my caution is growing around my market outlook for 2016. Accordingly in recent months, I have been building up a 30% cash position within my own portfolio into the New Year which I believe is likely to get off to a rocky start.

Most of my remaining holdings are in positions that I call the “Krampus Portfolio.” Simply put, these are companies that have wonderful balance sheets, attractive valuations, and pay decent dividends. They are also companies that can show earnings and revenue growth in the New Year despite the challenging global economic backdrop. Two of those Krampus stalwarts are below. 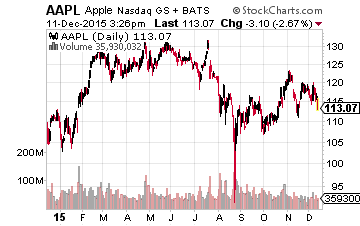 At the top of that list is Apple (NASDAQ: AAPL) which is a free cash flow printing machine.

The stock has been trading sideways since April after big gains over the previous year and a half.

What also attracts me to Apple stock at this time is the company has more cash on its balance sheet than any public company in the world.

Right now, Apple has enough cash on hand to solve Chicago’s huge unfunded pension liabilities if it chose to and still massively reward its shareholders. That is a level of safety that many companies simply cannot offer.

2015 will be the second year in a row that the tech juggernaut will have returned over $50 billion to shareholders via stock buybacks and dividends.

The company continues to gain market share and is making inroads in China which is powering a good portion of its recent growth. 2016 should be another year of 10% to 15% earnings growth on the back of mid-single digit sales increases. The stock is cheap at under 11 times forward earnings and also yields 1.8%. 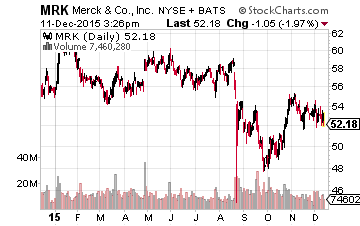 Merck (NYSE: MRK) is another company that has a solid balance sheet and should do just fine in 2016 regardless of how difficult the global economy turns out to be for the rest of the market.

One of the best thing about this well-known pharma play is its robust 3.4% yield.

The company’s revenues have been going down for years as a lot of its best sellers came off patent. However, Merck has done a great job repositioning its product portfolio and pipeline.

Sales growth is projected to finally return in 2016 thanks to new products like its much-anticipated entry into the lucrative hepatitis C market that should be launched in the first quarter of the New Year.

Its new immunotherapy drug Keytruda is an emerging blockbuster and is being tested in additional combination treatments. Cubicin is also showing great promise in treating complicated skin infections. Given its evolving pipeline and large dividend, the shares are a relative bargain at 14 times earnings.