The end of the year is here again, and 2015 looks like it is giving the average investor the opportunity to do what he does best: shoot himself in the foot.

And it’s the retired person who is the hardest hit.

The returns for the exchange-traded funds (ETFs) listed below tell the whole story: 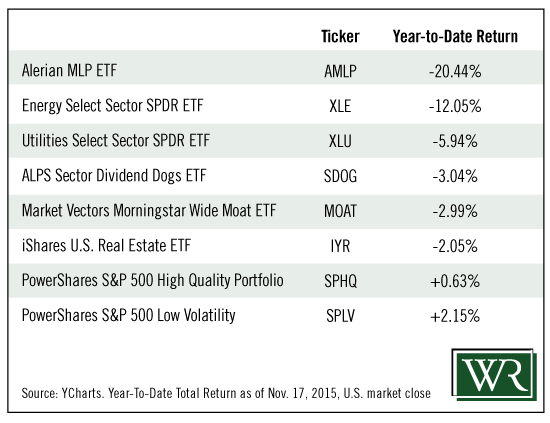 This list is a fairly good representation of the typical holdings a retired or conservative investor holds: utilities, big-name energy, REITs, low volatility… You get the picture.

And, except for two, they are all down for the year.

[ad#Google Adsense 336×280-IA]This is exactly the type of short-term, volatility-driven dip in the market that derails most small investors and drives them to sell at a loss.

They dutifully do their year-end calculations. They see they either made no money or had a loss for the year. They then conclude this stock thing doesn’t work and either sell all their losers or, worse, cash in and throw the babies out with the bathwater.

That’s only a 25-point drop for the broad market. Despite some crazy ups and downs, 2015 was nothing.

But none of that will matter.

Many will still get that disgusted or scared feeling because their holdings are down. They will curse the market and throw their statements in the garbage and do what they are famous for: They’ll sell at a loss.

And the saddest part of this whole scenario is the losses will be completely unnecessary because investors will be reacting to volatility, not market risk or even eroding fundamentals.

In the ’80s, the buzzword was growth. In the ’90s, no one could talk about anything but cellular technology, computers and the Internet. Now the buzzword is volatility. You can’t read an article or listen to an interview without it coming up.

So, essentially, most will be selling into emotion-driven, short-term spikes that mean nothing in the long term.

And don’t kid yourself: Long term is the only place you will ever make money.

This past year was full of short-term setbacks that generated huge emotional responses. Here are a few examples:

The volume numbers associated with every spike these events created tell me the average investor sold into all of them.

And as bad as that is, as I said, it is retired investors who have really taken it on the chin in 2015. They are much more likely to panic-sell into spikes because they believe selling is saving their irreplaceable nest eggs.

The reality is, selling into any move that is emotion-driven is throwing your nest egg away, not saving it. And the market will always give us lots of opportunities to throw our money away.

I have said it a hundred times in my videos here on Wealthy Retirement: Get a long-term picture of your retirement money and keep emotions out of your decision-making or get ready to live at the poverty level.

Yes, it is that simple and that sad.

Buying or selling into short-term spikes and trends is and always has been a losing proposition.

The only way to stop the losing behavior is to learn the difference between volatility and risk, and repeat after me:

Volatility is a measure of emotion, not risk.

“Vertical Options: The Safe, Consistent Strategy That Delivered Total Returns of 256% in 2015” [sponsor] This Thursday, December 17th, Wyatt Research’s Andy Crowder is hosting another one of his highly popular options webinars. This time, Andy’s revealing how his personal trading strategy captured total returns of 256% in 2015. Andy’s been using vertical options since the beginning of the year… and the results are nothing short of astounding – 27 trades… 25 wins. That’s a 92.6% success rate… And an average gain of 13% per trade. Plus, you’ll receive at least THREE free action-trades you can execute immediately! Click here to RSVP and secure your seat — before this event fills up!