2015 will go down as a record year for M&A activity by dollar volume when the all is said and done.

As an investor, this concerns me as this type of activity almost always peaks near market tops, 2007 and early 2000 being good recent examples.

[ad#Google Adsense 336×280-IA]However, as the previous head of Citigroup once famously quipped just before the start of the financial crisis “As long as the music is playing, you have to dance.”

Nowhere has deal flow been more robust than in the Pharma and Biotech sectors of the market.

There have been myriad small and mid-tier deals along with the biggest merger of the year from these sectors as Pfizer Inc. (NYSE: PFE) and Allergan (NYSE: AGN) have decided they will merge in a so-called inversion deal worth about $155 billion that would create the world’s biggest drug maker by sales.

What is amazing about the activity in these sectors is it could actually have easily been higher this year except that some high profile acquisitions did not take place.

There are numerous factors driving these combinations. The desire to achieve a lower tax rate is one as the United States has the highest corporate tax rate in the developed world, even if it produces 70% of the world’s patents for new drugs. Pfizer estimates it will save some $2 billion annually from purchasing Allergan and moving its corporate domicile to Ireland. The need to replenish pipelines, robust free cash flow at large biotech/pharma companies and low financing rates are also tailwinds.

These trends should continue into 2016, outside a global recession. Given this, I have myriad small names within my portfolio that I like as standalone entities but that I could see as attractive acquisition targets given they already have partnerships with larger players in the industry. 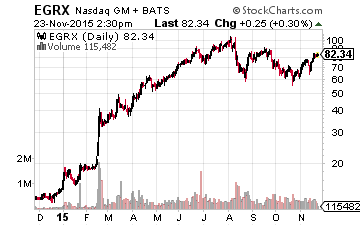 Let’s highlight a couple of what I would call “technology plays” within the biopharma place.

Eagle Pharmaceuticals (NASDAQ: EGRX) is one such concern.

The stock is up more than 450% since being included in the Small Cap Gems portfolio in Mid-December of last year (Biotech Gems did not launch until May of this year).

The trigger for that massive rally was a deal Eagle struck with Teva Pharmaceuticals. Eagle entered into a partnership with the generic drug giant for Eagle’s developmental compound for the treatment of chronic lymphocytic leukemia and indolent B-cell non-Hodgkin lymphoma.

Teva will be responsible for all U.S. commercial activities. Eagle received a $30 million upfront payment along with up to $90 million in additional milestone payments as this drug went through the approval process and then double digit royalty percentages on the sales of the drug.

With the new partner product with Teva Pharmaceuticals on the market, Eagle’s earnings should soar from around $1.00 a share this fiscal year to over $6.00 a share for FY2016 according to the current consensus.

Revenues should go from under $80 million this year to over $250 million in 2016. Given Eagle has just a $1.3 billion market capitalization with over $100 million in net cash on the books, this would be an easy and accretive acquisition for its partner Teva Pharmaceuticals; even Teva paid a significant premium. 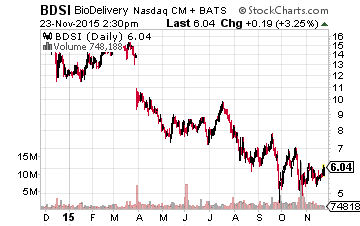 BioDelivery Sciences (NASDAQ: BDSI) is in the same boat as Eagle.

It has technology that puts existing drugs on a thin film strip that melts in your mouth, mainly for pain.

The company has had three compounds approved by the FDA.

By far the most important is BELBUCA.

This compound is a pain management drug which is a mu-opioid receptor partial agonist and a potent analgesic with a long duration of action that utilizes the company’s patented drug delivery technology.

BioDelivery has chosen to partner with much larger Endo International (NASDAQ: ENDP), an acquisitive biopharma concern based in low taxed Ireland. The recent FDA approval triggered a $50 million payout from Endo to BioDelivery.

BELBUCA should produce $200 million to $250 million in annual sales in a year or two according to the analyst reports I have seen. Peak yearly sales should hit $500 million. Given BioDelivery’s market capitalization of around $300 million, it would be in Endo’s interest to just buy BioDelivery.

It could claw back its $50 million milestone pay, not pay its $55 million in additional sales milestones and forgo royalty payments. Even with a substantial premium, Endo would be getting BioDelivery’s underlying technology and other approved products for basically free. The stock currently sells for just over $6.00 a share.

The median price target by the seven analysts that has an opinion on the company is $14.00 a share.

Again, I like both of these undervalued biopharma concerns as standalone entities. However, it makes too much sense in a robust M&A environment that at least one gets bought out at a significant premium in 2016.