As we head into the New Year, global growth is at its lowest levels since 2009. This can be seen in the recent traffic reports at America’s three largest ports in August and September. All three harbors reported container numbers down year-over-year, the first time that has happened in a decade.

Japan is back in an official recession after two straight quarters of economic contraction. Europe was barely above stall speed despite the best efforts of the European Central Bank before the heinous terrorist attacks in Paris over the weekend.

[ad#Google Adsense 336×280-IA] No one knows what China’s true growth rate is although most suspect it is significantly below the official seven percent target.

Copper is at six-year lows, oil has plunged over the past year and iron ore prices are scraping bottom; none of which should be happening if the Middle Kingdom was posting significant growth.

Both imports and exports have sported year-over-year declines in recent months.

It is plain old ugly in these parts of the market.

Domestically, outside of housing and auto production, pockets of economic strength are few and far between even as the Federal Reserve prepares to deliver its first interest rate hike since 2006.

Initial third quarter GDP growth came in at just 1.5% after posting almost four percent growth in the second quarter. Back to school sales were somewhere between disappointing and dismal with inventories historically high as we head into the critical Black Friday period.

We did get a recent impressive Jobs Report for October, but that is looking more and more like an outlier. Outside of autos, industrial production is on the cusp of contractionary levels. Most importantly for investors, profit growth has stopped dead in its tracks for the S&P 500 thanks to a strong dollar, tepid global demand, and the collapse in energy and commodity prices.

Earnings posted year-over-year declines in both the second and third quarter after barely being above flat line in the first quarter. The current consensus has profits declining again in the fourth quarter. This is looking like the first year since 2009 where S&P 500 profits came in at below year-ago levels since 2009.

I believe 2016 is going to be another year like 2015 with meager profit growth amid tepid worldwide demand. As such, I am positioning most of my portfolio in large-cap growth stocks with cheap valuations, decent prospects, solid balance sheets, and generous dividend yields. Here are three that look attractive right now especially in light of the huge decline in crude.

In the last few weeks, the International Energy Agency and Goldman Sachs have put out forecasts that projected oil prices to remain lower for longer than even pessimistic projections six months ago were conjecturing. I think until global growth significantly accelerates, which I don’t see happening in 2016, oil is likely to remain roughly in a range of $40 a barrel to $65 a barrel over the next 12 months. This should be a nice tailwind for our first three selections. 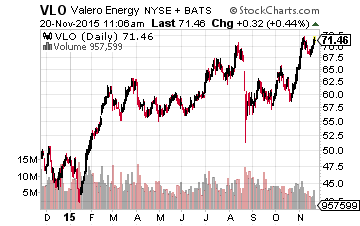 Refiners are one beneficiary of low crude prices.

The company has been printing money in recent quarters and has consistently stepped over consensus earnings estimates throughout 2015.

The stock provides a 2.8% dividend yield after doubling its dividend payout since 2013. Valero has a very solid balance sheet and continues to see capital expenditure needs drop. Earnings are tracking to a 35% gain this year and the shares are cheap at eight times this year’s profits, half the overall market multiple.

This is a key reason the auto manufacturing concern posted a third-quarter profit of $1.50 a share, more than 30 cents a share above the consensus.

General Motors also will achieve its goal of a 10% operating margin on its North American operations one full year before its goal.

In addition, General Motors’ stock is one of the cheapest in the market. Not only do the shares yield over four percent but the stock goes for just over six times forward earnings. Profits are tracking to better than 50% gains in 2015 and another 10% to 15% increase is what the current consensus expects in 2016. 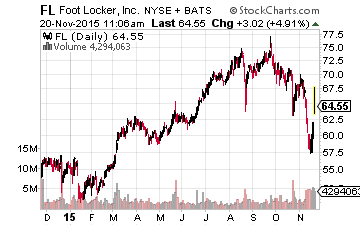 Foot Locker (NYSE: FL) looks like a good buy after the recent weakness across the retail space.

Footwear is one of the few areas that seems to be benefiting from the gasoline “tax cut” along with restaurant sales.

The company is churning out annual earnings growth of 10% to 15% on mid-single digit revenue increases.

Foot Locker has a wonderful balance sheet with some $1 billion in net cash. It currently pays a dividend of 1.5% and I expect it to continue to provide frequent dividend increases in the years ahead. The shares go for just 12.5 times forward earnings, 11 times if you equate for its cash on its books.