Hopes for an immediate rally in gold stocks have disappeared.

[ad#Google Adsense 336×280-IA][Recently], I told you the Market Vectors Gold Miners Fund (GDX) was drifting down to test its 50-day moving average (DMA) as support at about $14.40 per share.

I said this level MUST hold if gold stocks were going to rally further into the end of the year.

Otherwise, there was the potential for a breakdown if GDX continued to play out its trading pattern from last November through March.

GDX did continue the pattern…

Take a look at this updated chart of GDX… 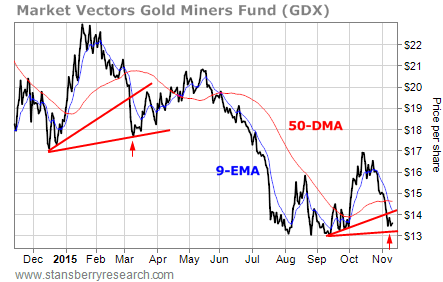 Not only did GDX fail to hold at the support of its 50-DMA, but it also broke below its first rising-uptrend line – just as it did in March. The next support level is at about $13.20 per share.

So we have another failed rally attempt and another breakdown in the gold sector. It’s going to take time for the chart to reset into a bullish pattern. That’s the bad news.

The good news is that if the chart pattern continues to follow the road map from earlier this year, the immediate downside from here is limited. GDX should consolidate by chopping back and forth in a mild, slow uptrend for the next several weeks. That will give it a chance to build up energy for an intermediate-term rally attempt just in time for the December 15 and 16 Federal Open Market Committee (FOMC) meeting.

For now, the sector is back to trying to form a bottom. There really isn’t anything for traders to do here.

The downside risk is small. But so is the upside potential in the short term.

I still think there is enormous potential for longer-term profits in gold stocks. But we’re likely in for a period of choppy action for the next few weeks.