It’s one of the biggest stories today…

After more than 35 years, China is reversing its controversial One Child Policy.

[ad#Google Adsense 336×280-IA]So when demand for these materials picks up, it’s bullish for the natural resources sector.

For example, China had a major economic growth spurt over the past few decades as its population transformed from simple farmers to urban workers.

This growth spurred a major bull market in natural resources from 2002 to 2008.

But over the past few years, folks have been worried about a slowdown in China.

You see, in 1979 China enacted its One Child Policy as a means of population control. At the time, China’s birth rate was 5.8 children per woman. There were roughly 830 million people in the country.

Under the policy, couples were only allowed to have one child. (Although exceptions were made.) Those who complied were offered financial incentives and preferential employment opportunities. Sanctions could be imposed on those who didn’t comply… and in some cases women were forced to undergo abortions and sterilization.

The One Child Policy cut the population growth rate from a peak of 23% per year to around 12%, as you can see in the chart below. 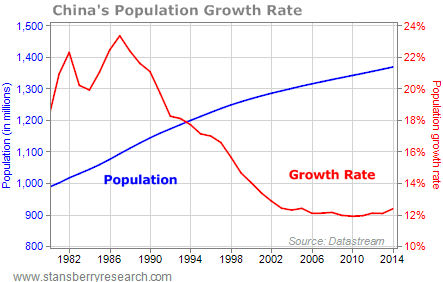 First, the country has vastly more males than females. Male children have traditionally been preferred in China because of the idea that they can find work to support their families. So under the One Child Policy, many female fetuses were aborted and female babies were given up for adoption. As a result, there is a huge pool of “leftover men” today.

By the year 2020, demographers expect China to have 24 million men who will not be able to find a Chinese wife due to the massive imbalance.

China also has a growing elderly population… and a shrinking workforce. By 2050, more than 25% of the population will be over 65 years old, compared with just 9% in 2014.

Here’s how the Chinese population broke down compared with the U.S. in 2014:

A growing elderly population and fewer families in the future would slow down China’s economy. So last week, China’s government announced it will reverse the One Child Policy and allow couples to have two children.

Last week, analysts at financial services company Credit Suisse released a report that the new Two Child Policy will result in an extra 3 to 6 million babies born annually in the five-year period beginning in 2017.

This would be a huge boost to the Chinese economy. According to Credit Suisse, the average cost of raising a baby in China is around $6,330, which would result in an extra $19 to $28 billion in consumer spending per year.

In short, China’s looming population growth is THE story in natural resources today. I plan on keeping a close eye on this trend. I suggest you do the same.