In September, my True Wealth Systems computers did something rare… They flashed “sell” signals on nearly every system-based investment we track.

What did I do? I listened!

We sold the majority of our open positions in True Wealth Systems.

[ad#Google Adsense 336×280-IA]And it might surprise you to hear me say this with nearly everything in “sell” mode, but I don’t think the great bull market is over yet.

There are too many big-picture reasons to believe stocks could still go much higher from here.

The more I dig, and the more numbers I dissect, the more it seems that we could be in the middle of a small to intermediate correction – on the way to much higher stock prices.

Today we’re seeing the same pattern we saw during the 2011 correction. 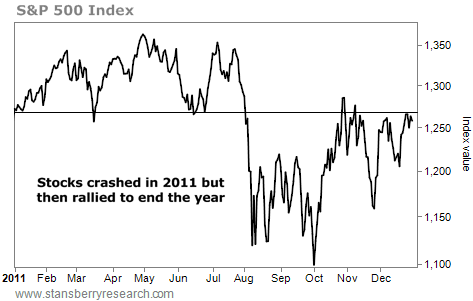 Stocks crashed in late July and early August. They then entered a volatile period for the next two months. They tested August’s bottom before finally making a new low in early October.

Then the game was on. Stocks began a new uptrend and didn’t look back for four years… 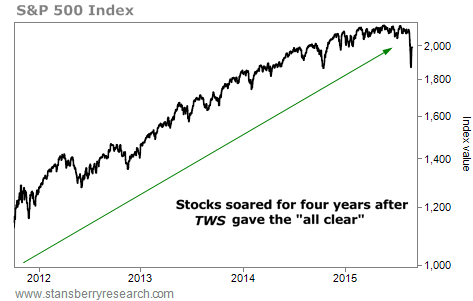 Buying just about anything during this period would have led to hefty profits. 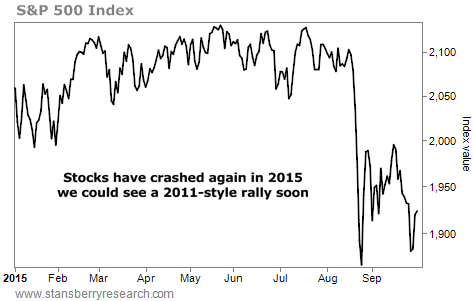 The similarities between today and 2011 are striking.

The S&P 500 crashed in late August. It has tested those lows after bouncing violently since then.

If this is “2011 all over again,” we’ll likely see more volatility and a new low in stocks before a new uptrend kicks in.

Of course, we can’t know if this is how things will play out. But history is our guide here – and it says higher prices are entirely possible.

Again, I’m happy to follow my stop losses and sell when I need to. But I believe the opportunity in stocks is for higher – not lower – prices from here.