[ad#Google Adsense 336×280-IA]To say they’re in firm command of the obvious is an understatement.

Still, millions of investors were surprised, and the stock got shellacked.

That’s simply stupefying to me. Not that it dropped, mind you, but that anybody was surprised.

I’ve been telling you that the company was a train wreck since before it IPO’d and fell all the way down from its peak over $90 a year ago. In fact, as recently as last week, Sept. 30, I reiterated that the company was not worth your time nor your money – unless, of course, you were shorting it.

GoPro Inc. (Nasdaq: GPRO) is a worse value trap now than ever, and any investor who gets sucked in now is playing with fire.

Kinda reminds me of the Chicago Cubs… after 107 years without a World Series title, maybe – just maybe – this year will be the year.

Here’s why GoPro stock is worth $15 at best and, even then, probably only as an acquisition for a bigger player keen to absorb GoPro technology.

I’ve repeatedly encouraged you to avoid initial public offerings because they’re little more than a carefully engineered trap set up by Wall Street and sprung on unsuspecting investors.

We’ve talked about companies like Shake Shack Inc. (NYSE: SHAK), Zoe’s Kitchen Inc. (NYSE: ZOES), FitBit Inc. (NYSE: FIT), and Twitter Inc. (NYSE: TWTR), among others, as examples of what happens when founders get caught up in their own grandeur.

Investment bankers care about perception and hope. They want to lure you in because doing so is worth hundreds of millions in fees to them when an offering is concluded. After that, they don’t give a rip; they’ve made their money.

Investors care about growth, revenue, and company operations. And, when reality doesn’t live up to the hype, they have to deal with risks that aren’t always apparent during the IPO process.

That’s the situation with GoPro.

No doubt the technology is fabulous. The very notion of a small, high-quality camera is like catnip for adventurous souls who want to share their world with others.

Analysts were quick to latch on to that possibility, noting that content creation would feed demand and that demand would, in turn, drive content creation. Everybody wants to share, goes the thinking.

Here’s how Goldman Sachs visualized the relationship for clients: 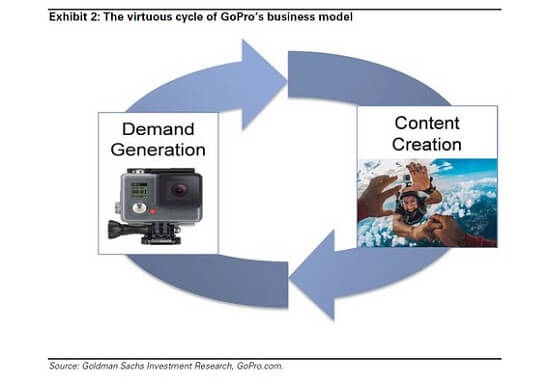 The trouble is that nobody bothered to ask who’s going to pay for the exchange of information. The company says that’ll come via a combination of advertising and clicks.

In other words, they hope that they will be successful in converting eyeballs to money.

Back when I first started my career, you couldn’t have brought a company like GoPro public. Results mattered, so an IPO was an extension of an already profitable business with real products. Hope was no more of a viable business strategy then than it is today. 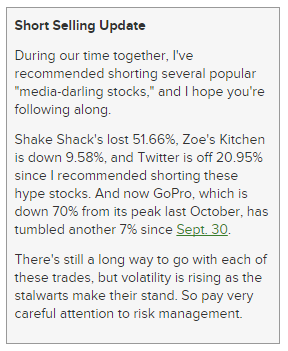 Case in point, GoPro’s technology is already being usurped by less expensive offerings from competitors like Xiaomi and Samsung. Apple Inc. (Nasdaq: AAPL) and Droid, for example, already have video editing tools that were supposed to be part of GoPro’s big draw this year.

Now expectations are pinned on GoPro’s planned quadcopter and streaming live camera footage that folds into some sort of new virtual reality.

In other words, you’re supposed to believe that the next best thing is just around the corner and that it’s going to miraculously provide the company with the revenue boost it needs to bring the stock back.

Three of the biggest companies on the planet are already working in this area: Google Inc. (now known as Alphabet Inc.) (Nasdaq: GOOG, GOOGL), Apple, and Facebook Inc. (Nasdaq: FB). Besides, my sons can buy a nice quadcopter for under $100 bucks on Amazon.

Absent truly different products that continually leapfrog the competition, GoPro is just another camera, and their content network is merely a bunch of self-selected footage lacking any compelling reason to watch.

Cutting prices, as GoPro’s done recently with the Hero4 Session, in attempt to move beyond the core users who put the company on the map in the first place isn’t going to help.

Gross margins will fall, as will earnings. Once earnings tank, it’s only a matter of time before the stock price does too.

If you really think that the stock will rise 116% to meet the median $65 price target analysts still have attached to the stock, that’s great. 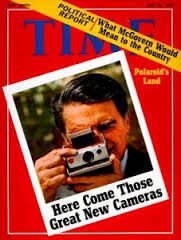 If you’re already short GoPro or have purchased put options over the past few months as we’ve continued our conversation, chances are you’re smiling ear to ear.

If not, the trade’s getting a little crowded, so you may want to think about playing the other side.

I think GoPro stock is worth $15 a share at best and probably only as a buyout for another larger player that wants to absorb the company’s technology.

Apple, Google, and Facebook are logical candidates, but they’re all moving ahead with their own technology, so it’s hard to imagine that they’d want to step up. That leaves Microsoft Corp. (Nasdaq: MSFT), which has a history of overpaying for companies that somehow never live up to their potential.

Perhaps a lowball order to buy GoPro at $20 a share would do it.