Today, we’re raising the question… Are the dividend payments of the world’s blue-chip oil companies safe?

People all over the world are familiar with the firms we’re talking about. You can hardly go anywhere without seeing the logos of major oil firms like ExxonMobil, Chevron, Dutch oil giant Royal Dutch Shell, and British producer BP.

Because of their dominant position in the energy food chain, these resource companies are among the most reliable in the world… known for their steady cash flows and reliable dividend payments… which are nearly as reliable as the rising sun.

[ad#Google Adsense 336×280-IA]Today, we’re suggesting the impossible… Some of these dividends could be cut…

If you want to know what’s likely to happen with oil dividends in America, you have to understand the fantastic narrative that dominated the oil industry over the past 20 years…

It was spun around “Peak Oil”… the idea that our ability to discover and produce greater amounts of hydrocarbon-based energy had peaked, and the world would soon run out of oil.

If you bought into the Peak Oil mania, you could justify chasing oil that cost $50… $60… even $70 per barrel to acquire and produce.

That’s because the chart of oil prices that companies were working from was a straight line to the sky. Everyone thought oil would get more expensive.

Oil companies rely heavily on price forecasts for investment purposes. The math is simple: If the forecast shows that the price of oil will be $80 per barrel for the next few years, you don’t want to find and produce oil that costs $90 per barrel… because you’ll lose money. It’s “uneconomic.”

But even as recently as 2013, the price-forecast models were still based on the idea of oil scarcity. For example, we can look at the U.S. Energy Information Administration’s (EIA) highly influential International Energy Outlook to understand this phenomenon. In 2013, the EIA’s most conservative price model projected oil prices of $75 per barrel by 2040. Its base model put the price at $163 per barrel, and its high-price model put the price at $237.

If you’re a major oil company following one of these price models, you can spend billions of dollars developing oil assets in bizarre places. Those estimates justify taking on a five- to 10-year project with oil in the $80- or $90-per-barrel cost range. And there were plenty of banks willing to lend oil companies the money to do it, based on those same projections. It caused billions of dollars to flow toward oil and natural gas exploration and production companies – all because oil prices were going to the moon.

Except oil didn’t get more expensive. As regular readers know, a weak global economy and a glut of supply have caused oil prices to plunge over the past year.

All that expensive oil is now “uneconomic.” This means companies are struggling to produce oil at a profit, reward shareholders, and fund all of their growth efforts. And the debt they’ve taken on to help pay for these initiatives is piling up.

American energy companies didn’t just borrow money to develop oil and gas projects in the U.S. They also spent it on huge projects all over the world. Take the giant Kashagan oil field in Kazakhstan, for example. Jokingly referred to as “Cash All Gone” and “Cash Again,” this giant oil field sits in the northern part of the Caspian Sea. Engineers had to build artificial islands to hold its production platforms.

Discovered in 2000, Kashagan was the largest conventional oil field found in the last 30 years. It was supposed to begin production in 2005 at a cost of $10 billion. However, delays and setbacks sent the cost to develop the oil field soaring. Today, total cost estimates run between $50 billion and $116 billion.

To put that in perspective, the per-barrel investment cost at Kashagan is roughly five times what it would cost to find and develop a comparable field in Saudi Arabia or Iraq.

Currently, the project is under repair and should begin operation in 2017.

These projects gained traction a few years ago because of the firm belief that oil prices could only go up.

If this sounds familiar, it should… We saw this same kind of devastation in the gold industry back in 2011. Thanks to a false conviction in higher gold prices, chasing higher costs per ounce led to outsized levels of debt and the financial implosion in the gold-mining sector.

We’re seeing similar signs in oil companies today… even the giant, well-loved ones like ExxonMobil.

From 2008 to 2014, the four most well-known publicly traded oil companies – ExxonMobil, Royal Dutch Shell, Chevron, and BP – generated average cash from operations of $35 billion per year. Based on results through the first half of this year, we show that could easily drop by almost one-third to $23.5 billion.

And as cash flow falls, these companies are using more of it to pay dividends: 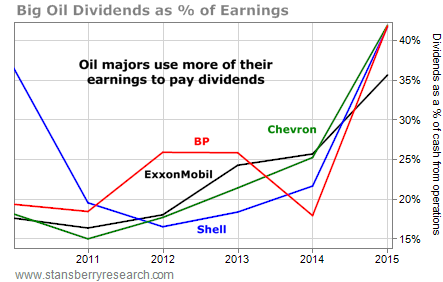 A dividend cut is usually the last resort. The payout to shareholders is seen as the key factor supporting share prices.

But oil companies are quickly running out of options.

Finally, and most worrying, oil companies have turned to easy credit to raise money.

This is like putting your electric bill on your credit card. Eventually, you’re going to have to pay that bill. The money has to come from somewhere… like the funds currently used to pay dividends.

At this point, few companies have cut or frozen their dividends. But unless oil prices rebound in the next six to 12 months, the odds of that happening will continue to go up.

I recommend staying away from the Big Oil companies today.