In the past year, more than 10 oil and gas companies have filed for bankruptcy – including, most recently, Samson Resources.

And there are likely more bankruptcies to come. As I told you in July, this is actually good news for resource investors. When enough producers leave the sector, we’ll see a bottom in resource stocks.

[ad#Google Adsense 336×280-IA]But in the meantime, there’s one group of companies set to profit. Let me explain…

As regular readers know, commodities have been in “bust” mode over the past year.

The price of benchmark West Texas Intermediate (WTI) crude oil is down more than 50% from its June 2014 peak.

Low prices are making it impossible for many resource companies to earn profits.

Companies with high levels of debt are struggling to pay it back.

And things could soon get worse…

You see, Federal Reserve Chair Janet Yellen says the Fed plans to raise interest rates before the end of the year. Higher interest rates cause the interest portion of a company’s debt service costs to rise (most companies don’t have fixed-rate debt like you may have for your mortgage). Many resource companies that are already struggling to pay their debts may soon be pushed to restructure… and some will have to file for bankruptcy.

But this is good news for one group of companies.

You see, when a company files for bankruptcy, it hires professionals to help. In addition to attorneys, bankrupt companies often hire an advisor to assist with the nuances of operating while in bankruptcy, and an investment bank to restructure debt and sell assets.

The most well-known groups to offer these services work within the restructuring division of a larger firm or bank.

With low interest rates the past few years, the restructuring market has been quiet. But now, with a wave of new resource bankruptcies looming, companies that offer restructuring services like the ones mentioned above are preparing for growth.

For example, many investment banks are hiring new employees for their restructuring divisions.

Global bank Houlihan Lokey (HLI) went public earlier this year to raise money to continue its growth. Last year, Houlihan advised on more than $90 billion worth of restructuring deals. And from 2000 to 2014, it served as an advisor in 12 of the 15 largest bankruptcies – including banks Lehman Brothers and Washington Mutual, and telecommunications company WorldCom.

In short, the restructuring market is likely to see a lot of growth soon. So how can you set yourself up to profit? The table below shows some of the public companies in this space. 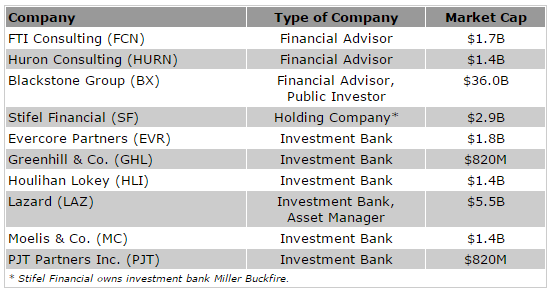 All of these names have experience helping struggling resource companies restructure. For example, Blackstone is providing financial advisory services in the bankruptcies of Samson Resources and coal producer Walter Energy. Lazard is working in the Sabine Oil & Gas bankruptcy. And Moelis is involved in utility and coal producer Energy Future Holdings’ bankruptcy.

So all of them will benefit from an increase in resource bankruptcies. With commodity prices likely to stay low in the near future, and interest rates likely headed higher, I recommend looking into some of the above stocks today.