I should have done much better with my own money than I did.

And that was a big mistake.

I will share that mistake with you because I don’t want you to make it today.

The 1990s were an incredible time for stocks…

Stocks actually had no losing years from 1991-1999 (when you include dividends). 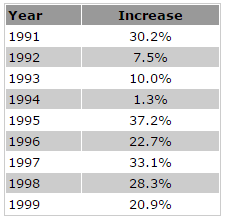 In short, the 1990s were a great decade for stocks – one of the greatest ever.

So what did I do wrong in the 1990s? What was the one specific mistake I made?

Here’s my mistake: I was afraid to stay fully invested in the 1990s when stocks started getting “overpriced” relative to history.

I hope you don’t make that same mistake today.

At first, avoiding stocks because they’re “overpriced” seems like a reasonable thing to do. You don’t want to overpay for an investment, of course. I understand.

However, you need to learn an important lesson that (admittedly) took me a while to learn: A stock market boom never dies just because stocks become overpriced…

High prices are a symptom – but, importantly, NOT a cause – of death.

(I hope you can apply this lesson quicker than I did!)

To show you why it’s so important, let me show you just how overpriced stocks were in the 1990s… during one of the greatest decades to be an owner of stocks…

From 1900 to 1990, the average price-to-earnings (P/E) ratio (the most widely used measure of stock value) for the stock market was about 13. Yet stocks were so expensive for the entire decade of the 1990s, the P/E ratio never dipped lower than 14. 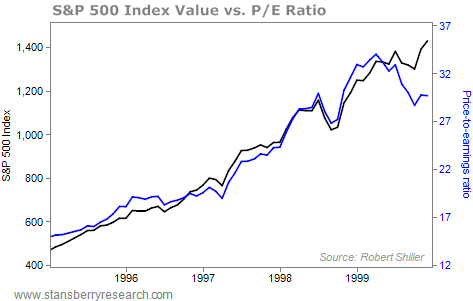 My mistake in the late 1990s was simple…

I personally chose to not be heavily invested in stocks from 1995 to 1999, simply because I thought they were overpriced. And I personally missed out on one of the greatest booms in stock market history.

Investors are worried and skeptical at this point, just like they were in the autumn of 1998 (due to the Asian financial crisis). At that point, stocks were expensive, trading for well more than 20 times earnings.

In hindsight, late 1998 wasn’t the end of the boom, even though stock prices were expensive. Instead, the fear in late 1998 simply set the stage for the final push higher in stock prices. Stocks soared more than 50% in less than 18 months after that late 1998 bottom.

I feel like we’re in a very similar situation today…

We had a stock market correction in August… and investors got worried and skeptical (like they were in late 1998). Like in 1998, stocks are overpriced relative to history – but remember, high prices alone aren’t enough to kill a boom. 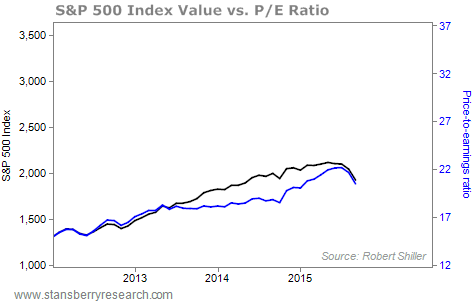 One of the most common reasons I hear that stocks “have to fall” these days is because they’re overpriced. But keep in mind that they were overpriced during the entire decade of the 1990s – and that turned out to be one of the greatest decades in history for stock investors.

Stocks don’t have to fall because they’re overpriced. (Personally, I would argue that stocks are not even overpriced today relative to other investments, because of low interest rates, but that’s a story for another day.)

Instead of stocks falling, I actually believe that right now is more like late 1998 – investors are a bit scared. As that fear goes away, stock prices could go higher.