Most investors have a major blind spot…

The mainstream financial media spend most of their time covering the biggest companies in the world. Companies like Apple (AAPL), General Electric (GE), and ExxonMobil (XOM) get coverage with practically every tick of their stock prices.

As for the rest of the time, the financial media cover round after round of venture funding for tiny, “hot” technologies and Internet startups.

At least 124 million Americans – more than 80% of the total U.S. workforce – are employed by companies outside of the S&P 500. Think of all the people you know. I bet less than a handful work at one of those big multinationals.

In fact, a full 50% of U.S. gross domestic product (GDP) comes from small and medium businesses with fewer than 500 employees. These are the types of businesses that power the modern economy. They are also often missing from the average investor’s portfolio.

Today, I’ll rectify that omission with a type of business that falls into this “sweet spot”…

These are businesses that are too big for a typical small-business or bank loan… but too small to issue bonds through the Wall Street investment-banking cogs. They also don’t want to give up ownership by issuing stock.

It’s such a rare investment that there are only about 50 of them trading on public markets, despite the fact that they’ve been around since 1980.

For these companies, business is good. So good that a number of larger firms are starting to get into the game. Private-equity firms Blackstone, KKR, and the Carlyle Group have all entered this industry in the last 10 years. And five months ago, investment bank Goldman Sachs raised about $120 million to launch a competitor.

This rare type of investment opportunity is called a business development company (BDC).

There’s nothing earth-shattering about their business model. They lend money to other businesses and collect interest payments. As long as the interest collected outpaces its cost of capital, the BDC earns a profit. It’s the whole story of these unusual lenders that makes them so compelling…

On top of all that, BDCs typically have senior status on their loans. If something goes wrong, they get paid before anyone else. They are also limited to using leverage of one-times their capital, and they often use leverage levels much lower than that.

As you can see, BDCs are simple businesses with some good features for income investors.

Banks don’t want to lend to midsize companies anymore because of hefty new regulations out of Washington, D.C. Banks have tightened their balance sheets due to new rules, reducing the amount of loans they make.

With reduced competition from banks, BDCs are filling the gap. The market is growing and yields are healthy.

Right now, the average BDC yields more than 10.6%, according to the benchmark Cliffwater BDC Index. (You can see the latest yield at www.BDCs.com.)

And comparing the two yields gives you a “yield spread” that can show when BDCs offer extra value.

Historically, BDCs are safer than high-yield bonds, with lower default rates due to the loans’ senior status, as well as the value of coaching and support from the BDC.

In addition, BDCs sometimes diverge from their net asset values (NAV). Right now, BDCs currently trade for a discount of around 10.6%, which is near the high end of the past five years. With a BDC, you do see more price volatility than you would in a typical bond investment because BDCs use leverage and they trade in the open market.

Right now, the typical BDC offers a yield of about 10.6%, while high-yield bonds offer 7%. That gap is bigger than usual, as you can see in the following chart. 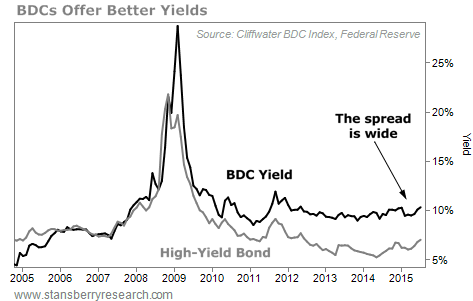 BDCs also look cheap today thanks to a decision excluding BDCs from the indexes of benchmarks Standard & Poor’s and Russell Investments.

So index-fund managers who follow the S&P 500 or the Russell 2000 had to dump the BDCs they were holding. The decision sent BDCs’ shares down, as you can see in the chart below.

BDCs hit a high point right about when the benchmark indexes made the change in mid-2014. 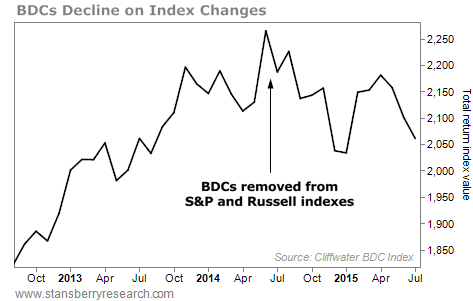 However, little has changed in the underlying value of the BDCs.

The economy is picking up. Businesses are hiring and expanding. But they need cash to do so.

Traditional banks don’t want to give it to them. Thanks to tighter regulations and lower appetites for risk, banks are tightening their balance sheets.

Today, banks have more equity as a percentage of assets than they have had in 25 years. This means they are loaning out less money for each dollar they hold. The same thing shows up in commercial and industrial loans, which keep declining as a percentage of total assets of commercial banks.

So BDCs have less competition from banks… and borrowers are increasingly looking for BDCs to fill the gap.

Thanks to these macro trends, I expect solid deal flow for years to come.