Buffett penned that in a op-ed piece in The New York Times in 2008, when the stock market was gripped by fear due to the financial crisis.

The rationale there is that Buffett wants to buy high-quality businesses when investors are unloading shares on the cheap, allowing Buffett to pick up assets for less than they’re really worth.

Perhaps the better question is: why not?

Great businesses arrive to a position of greatness by providing products and/or services that consumers, businesses, and/or governments demand.

These products and/or services become ubiquitous over time, allowing these great businesses to thrive and grow profit like clockwork.

While stock prices change by the minute every single trading day, that demand doesn’t.

As such, the actual value of a business also doesn’t change very quickly.

And that’s really the rub: One has to be able to separate price from value in order to determine those businesses that are available on the market for less than they’re worth.

One can’t determine if someone is fearful or greedy without first knowing what something is actually worth.

When it comes to valuing stocks, it’s part art and part science. But it’s not terribly difficult to develop a system that’s repeatable across the board.

For instance, Dave Van Knapp shared his system with you readers as part of his Dividend Growth Investing Lessons, and it’s a great framework from which to build upon or even use in whole.

Now, while the broader S&P 500 is still sitting near all-time highs, there are many stocks in the Energy sector that have been absolutely hammered over the last year; investors have been fearful of these stocks and their long-term prospects.

If one wants to be greedy when others are fearful, perhaps it’s time to take a page out of Buffett’s book?

Being in a position to buy a high-quality stock for less than it’s worth gives you huge advantages, which is probably why Buffett loves being greedy when such an opportunity presents itself.

Not only do you get the long-term total return that a great business will afford its shareholders in ordinary circumstances, but you also get a boost right from the start.

That boost comes in the form of both a higher yield and higher long-term total return.

Assuming no change in the dividend, a stock that’s priced lower will naturally come attached with a higher yield.

Price and yield are inversely correlated. So while the actual amount of a dividend doesn’t change very often, the price and yield fluctuate constantly.

Assuming a company pays a $0.25 quarterly dividend to shareholders, its stock price can have a dramatic difference on the actual yield investors receive.

This difference in yield adds to your potential total return in a big way all by itself, but you also get the added benefit of the market repricing that stock at a more appropriate level down the road, leading also to capital gains.

So we can see why Buffett loves being greedy when others are fearful.

And it’s a trait I share, which has in part allowed to me to build the real-life $200,000 portfolio that will one day fund my early retirement by way of the growing dividend income it generates.

My portfolio concentrates on the stocks you’ll find on David Fish’s Dividend Champions, Contenders, and Challengers list – an invaluable resource that lists more than 700 US-listed stocks that have all increased their dividends for at least the last five consecutive years.

There’s one stock that can be found both in my portfolio and Mr. Fish’s list that currently appears to be valued at a level where others are clearly fearful about its prospects.

This stock definitely fits the bill of fear – it’s down more than 21% since the start of the year.

Now, some of that is warranted. Exxon Mobil, while being fully integrated across upstream and downstream operations, generates a significant chunk of its profit via the exploration and production of oil, and lower oil prices can wreak havoc on their profit.

However, one has to really think about the price of oil within the context of long-term energy consumption across the world.

Are developing countries more or less likely to use more oil & gas over the foreseeable future?

Is the supply of these commodities likely to grow over the long haul?

We know that supply of the resources that Exxon concentrates on is finite, yet demand across the world continues to increase over time.

Recent technological advances in E&P have led to a renaissance of sorts here in America, as fracking has allowed companies to tap previously unreachable sources of energy, which has led to a glut on the global market.

But this will glut will work itself out over time. Meanwhile, our global infrastructure still relies heavily on traditional forms of energy, meaning their dominance will very likely continue for years to come.

What’s really amazing about Exxon Mobil is that even though its operations can be heavily cyclical, they’ve managed to increase their dividend to shareholders for the past 33 consecutive years.

That time frame stretches not only the aforementioned financial crisis, but numerous boom-and-bust cycles in oil & gas, including the current one. In fact, Exxon Mobil just increased its dividend in April of this year, well into the current contraction. If that isn’t consistency, I don’t know what is.

The stock currently yields 4.04% right now, which is near an all-time high.

For perspective, the average yield for this stock over the last five years is only 2.5%.

That’s a massive spread of more than 150 basis points. Investors have averaged a yield of only 2.5% over the last five years, while investors buying XOM today get a starting yield of more than 4% right off the bat. That’s a huge advantage.

Over the last decade, the company has increased its dividend at an annual rate of 9.8%.

So you’re not only getting a pretty monstrous yield here, but you’re also getting a dividend that’s growing well above the rate of inflation, increasing purchasing power all the way along.

Predictably, the payout ratio is slightly elevated because Exxon’s profit has taken a dip recently. However, at only 52%, the dividend is still well covered here, which is probably why the company decided to increase the dividend earlier in the year.

While nobody knows where oil prices are going tomorrow, Exxon Mobil is about as consistent as they come when it comes to sending a dividend check to shareholders that’s increasing year in and year out.

And that’s the kind of company I like to own when a storm like this comes around, which is a big reason I’m a shareholder in this company.

Let’s next take a look at underlying operations over the last decade. While some this will be skewed due to ups and downs of the industry, 10 years gives us a nice snapshot of what to expect going forward.

Furthermore, knowing what kind of rate this company is growing at will help us when it comes time to value the stock.

Not much in the way of revenue growth, which isn’t totally surprising since we’re looking at a rather massive base from which to increase. It’s tough to move the needle when annual revenue is over $400 billion. That’s more than some countries take in per year!

Part of the excess growth generated across the bottom line was due to extensive buybacks – Exxon reduced its outstanding share count by approximately 32% over this period. And the company continues to aggressively buy back stock.

Not outstanding growth here, but one invests in Exxon for its defensive nature/position rather than for huge top-line and/or bottom-line growth. As long as the world continues to run on oil & gas (something that’s highly likely for the time being), Exxon Mobil will remain a very valuable enterprise.

And their integrated business model provides cushion the sense that downstream operations (refining and chemicals, etc.) can still profit handsomely even when upstream (exploration and production) operations are struggling due to lower oil prices.

Moreover, I suspect that the company will continue to grow its dividend for years to come, even if oil doesn’t immediately bounce back.

One aspect of the company that seems to ensure this is the extremely flexible balance sheet.

Exxon Mobil is one of only three US companies with a AAA credit rating from Standard & Poors. Long-term debt is negligible, meaning the firm can take on debt opportunistically. As such, they’re in a great position to continue paying the dividend even in the face of short-term difficulties.

The company’s profitability is also among the best in the entire world for its business model. Over the last five years, Exxon Mobil averaged net margin of 8.33% and return on equity of 23.37%. These are rather robust numbers.

Exxon Mobil will continue to operate in a cyclical industry. It’s been that way for more than a century now. But don’t forget that this company has been making money since John D. Rockefeller ran the original Standard Oil.

There’s incredible staying power here and the products it provides to the world are ubiquitous, and likely to remain so for years to come.

So how fearful are investors right now?

Okay. What’s this stock actually worth? What would be a fair price to pay? How greedy should we be?

I valued shares using a dividend discount model analysis with a 10% discount rate and a long-term dividend growth rate of 6.5%. Although that’s modestly higher than the most recent dividend increase, it’s well below Exxon’s long-term track record for dividend growth. The DDM analysis gives me a fair value of $88.85.

My perspective and valuation indicates that this stock is priced at a level far below its intrinsic value. The yield is much higher than the average while the P/E ratio isn’t even that skewed after earnings have taken a beaten recently. But I’m not the only one around looking at this stock…

Morningstar rates XOM as a 5-star stock, with a fair value estimate of $92.00.

Looks like there’s some consensus there. No matter how you slice it, the prevailing opinion is that this stock is priced well below what it’s worth right now. Averaging out the three numbers so as to work with a final figure gives us $90.28. Looking at that final valuation figure means this stock is potentially 20% undervalued right now. 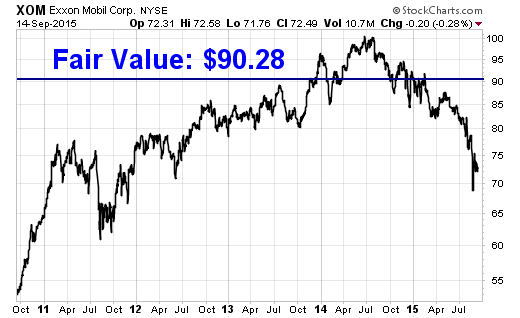 Bottom line: Exxon Mobil Corporation (XOM) is a high-quality, integrated oil supermajor that’s been providing the world with ubiquitous energy products since the time of Rockefeller. And it’s been increasing its dividend for more than three straight decades.

Operations are cyclical and recent supply concerns have hit the price of oil. But if there’s any firm that is poised to do well through the cycles, it’s Exxon. Whether you want to be greedy when others are fearful is up to you, but this stock offers the potential for 20% upside on top of a 4%+ yield that’s near an all-time high. This stock should be strongly considered here.