Today’s essay is about something no one ever wants to talk about: The horrible, out-of-control feeling that overwhelms investors and leads them to make irrational financial decisions with terrible consequences. Panic.

For wise investors, it’s not a question of if other folks are going to panic, it’s a question of when. Today, I’m going to give you a far better understanding of what causes investors to panic.

Let me start with something I doubt you’ve thought about before: There are two kinds of panic that affect investors.

You might have even felt it over the last few weeks.

This kind of panic sets in when stocks fall sharply on huge volume, like they did on Friday, August 21, and again on Monday, August 24.

An important secret lies beneath these moves.

Once you understand this better, you’ll never succumb to these feelings again.

The topics below deal with making smart decisions in the midst of severe financial losses – something that most people will never learn how to do. I’m going to tell you how I learned to deal with these pressures and these emotions.

These are the ideas and strategies that worked for me, and I know they’ve been helpful for many of the people I’ve trained and worked with over the years. There’s certainly no guarantee these ideas will work for you… and, in fact, I suspect that few of our subscribers will even agree with me about what I’ve written below. If you don’t agree, I’d love to know why (feedback@stansberryresearch.com). I’ll keep an open mind. After all, there’s always more to learn.

Most people believe that the panic we saw in the market last month (the huge volume, the big moves down in stock prices) was the result of emotions. Most people call this a “panicked” selloff. I don’t believe it.

Selloffs like that aren’t caused by emotional behavior. Yes, of course, some people are panicked. Yes, some of those folks are selling. But the huge volume and the big price changes we saw last month only happen when lots of investors realize they’ve made a big mistake.

As the realization dawns on them, their reaction is that kind of determined selling… no matter what the price. This reflects an important change in the market’s basic understanding of the underlying fundamentals. Something “broke” last month. One (or more) of the major “pegs” of this bull market was revealed to be false. And the response by the market participants was urgent and emphatic. This wasn’t merely emotional selling. This was the realization that huge amounts of capital have been misallocated.

This kind of emphatic selling is the natural result of a lot of bad decisions made in the months and years before the actual panic. The biggest excesses in the most recent credit bubble were in oil and gas exploration, subprime auto finance, and student loans. That’s why you saw such big moves down in General Motors (-8%) and Santander Consumer Finance (-4%). And that’s why in my Investment Advisory portfolio, we were stopped out (with some losses and some gains) of most of our remaining oil-related investments.

The key to avoiding costly losses during big market panics is simply to avoid making mistakes along the way. I’ve been warning about the coming correction in the oil industry and the reckless lending that was propelling the boom since 2012. I’ve been warning about the coming train wreck in subprime auto lending for a year and a half. Just a week before this market correction, I told my readers exactly why it was inevitable and would happen soon. So we weren’t surprised. And our portfolio didn’t suffer much.

No, we weren’t able to avoid all of the losses the market endured last month. We don’t have a crystal ball. But just looking at the most recent recommendations on these stocks, the average gain from the four energy-related companies we were forced to sell was 5.3%.

We avoided taking any big losses last month because we didn’t make many mistakes earlier. We took profits along the way. We were diversified. And we only bought shares when they were available at good prices. As a result, we only lost one non-oil-related stock to a trailing stop.

When other investors “panicked,” we didn’t have to do much of anything, because we had made good decisions in the years and months leading to the correction.

Last month, capital fled from the weak and the foolish and returned to the wise and the patient. The media, which cater to the lowest common denominator in our society, call this a “crisis.” We call it a victory. These “panics” are one of the main reasons why capitalism works. The virtuous are rewarded, while the foolish and greedy get “taxed.”

Now… let’s talk about the second kind of panic, the kind that few people ever talk about. This is the kind of panic that freezes investors. It leaves them unable to make decisions – often with horrible consequences.

This type of panic is poorly understood. It’s almost never written about. No one discusses it. But it’s far more dangerous to you than the first kind of investor panic. There’s a secret to understanding this type of fear, too. Once you know where it comes from, it won’t ever bother you again.

I’ve received hundreds of letters that all say the same thing: “Porter, after the bear market of 2002… or after the financial crisis of 2008… or after the correction of 2011… I was too afraid to buy stocks. I was just frozen. I couldn’t pull the trigger…”

I don’t think this correction is finished. The real carnage hasn’t even begun. This bull market was built on a few key narratives: That China’s growth would propel resource prices forever… that Europe was fixed and would begin to rebound… and that the U.S. economic rebound would create a huge new wave of consumer demand. These things haven’t come to pass, and the market is beginning to realize it.

The big problem, which will take a long time to fix, is credit. Credit-default swaps have begun to soar in price (revealing credit distress) in big, important businesses. Auto makers General Motors and Ford, energy producer Chesapeake Energy, and resource giant Freeport-McMoRan, for example, have all seen big spikes in the cost of credit protection associated with their bonds. Credit-default swaps are how banks, insurance companies, and major hedge funds protect themselves from credit losses. These moves are indicative of a much tougher credit environment moving forward.

These facts are going to scare a lot of investors. Some of them will panic. They will sell everything. They will go to cash. They will miss once-in-a-decade opportunities to buy high-quality businesses – the kind of investments that can multiply your capital by 10 or 50 times in a decade.

That’s why I see the idea that the market is probably going lower as good news. I’m building a big list of securities that I’d like to buy. I know that I can’t time the bottom – all I can hope to do is to buy some world-class businesses at fair prices. I will only have these opportunities if other investors “panic” and refuse to buy stocks because they’re afraid of what went wrong during the last cycle.

You’ll find a sample list below. Keep in mind, these aren’t necessarily “buys” at today’s prices. And these names may or may not ever end up in my Investment Advisory recommended portfolio. We have a lot more work to do researching these names. 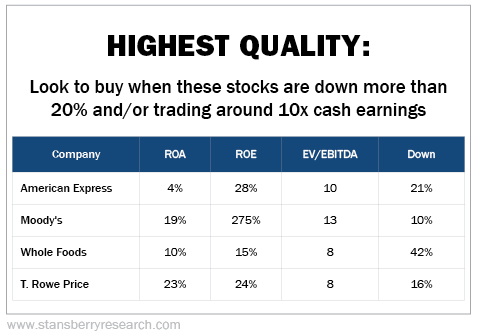 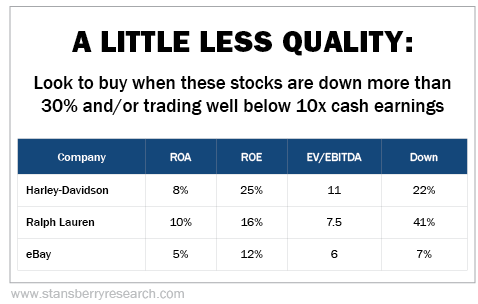