Markets around the world are breaking down. But as we’ve written recently (here and here), this volatility is likely overdone. And it’s creating real opportunities.

Most investors are focused on the U.S. today. But one of the biggest opportunities isn’t at home… It’s in Europe.

[ad#Google Adsense 336×280-IA]Yes, stocks have been volatile, and we have hit some stop losses… But looking at the bigger picture, European stocks are a fantastic opportunity – an even better one than U.S. stocks.

U.S. stocks have gone up for six straight years.

European stocks haven’t gone up nearly as much…

Europe’s major blue-chip index – the Euro STOXX 50 Index – was up in just three of the last six years.

And it’s down again this year. Take a look… 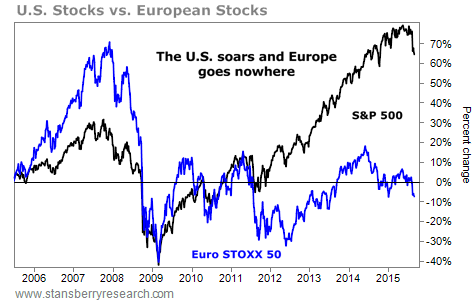 This incredible divergence in performance has made Europe’s stock market cheap. Take a look…

European stocks are more than 40% cheaper than U.S. stocks when you look at some major value metrics, including price-to-book, price-to-sales, and dividend yield.

In short, we want to own European stocks when the uptrend returns. The eurozone economy is the world’s largest… and yet its stock market is an incredible deal relative to U.S. stocks.

When I look at Europe today, I see the U.S. a few years ago…

Here in the U.S., unemployment is down, stocks are up, and the economy is slowly ticking higher. Because of that, we’re on the verge of higher interest rates from the Federal Reserve. But not in Europe…

Of course, this will lead to increases in asset prices, like we saw happen in the U.S.

Europe’s stock and property markets will likely soar in response to this program. And higher interest rates won’t appear in Europe for years.

European stocks should be a fantastic opportunity, particularly when the uptrend returns.