I often espouse the benefits of investing in companies that provide ubiquitous products and/or services.

And the reasoning is simple. When something is ubiquitous, you have an excellent source of recurring revenue with high visibility. Something only becomes ubiquitous because there’s strong demand for it.

And that which is currently ubiquitous has a tendency to stay ubiquitous for a long period of time due to that aforementioned demand. Big shifts in ubiquity generally don’t happen overnight.

[ad#Google Adsense 336×280-IA]Well, it would then make sense that companies that provide these ubiquitous products and/or services profit tremendously from their positioning, and that’s something I find true far more often than not.

Something that has become increasingly ubiquitous to the point where people basically can’t live without it is the mobile phone.

If you were to actively attempt to find someone who doesn’t currently own and regularly use a mobile phone, you’d probably waste a whole lot of your time.

What that tells me is that there’s an incredible investment opportunity there. When something is tethered to people in the way their mobile phones are, that indicates to me that plenty of money is to be made over the long term.

AT&T Inc. (T) is such an opportunity.

This company has corporate history dating back to the 1800s. If you’re looking for staying power, it’s tough to find a better example than that.

And if you’re looking for ubiquity, try this on: The company supports approximately 132 million wireless phone connections as of the second quarter of fiscal year 2015. This makes them one of the largest wireless providers in the world.

In addition, they support almost 16 million high-speed internet connections, which another ubiquitous part of our society.

Long thought of as a stodgy, boring stock, the company just kicked the excitement into high gear with the recent acquisition of DIRECTV. This transformational transaction now means AT&T is the world’s largest pay TV provider, supporting approximately 45 million video connections across DIRECTV, U-Verse, and their associated affiliates.

And while the content delivery landscape continues to change, this acquisition puts AT&T in a pretty good spot. They now have major access to a loyal and growing Latin American market, while giving the company an ability to creatively bundle their services like never before.

In addition, they have a unique value proposition in regards to live sports. Although cord-cutting is a concern, most sports are watched live. And with their NFL Sunday Ticket, NBA League Pass, NHL Center Ice, and MLB Extra Innings offerings (among others), they’re extremely well positioned to capture new customers will retaining current ones.

So let’s take a look at their financial results over the last decade, which will give us some idea as to what to expect in the future. It’ll also help us later value the business. We’ll have to keep in mind, though, that the DIRECTV acquisition just closed a month ago.

However, there was the combination of assets between SBC Communications and AT&T during this period. And a later acquisition of Bell South turned AT&T into the large wireless provider it is today. So that revenue growth was largely propelled by that activity.

Earnings per share growth gives us a better read on what the actual growth of the company is, as this is profit per share. That’s relative growth rather than absolute growth. EPS actually decreased over the last decade from $1.42 to $1.19.

This, too, should be looked at with some context. Adjusted FY 2014 EPS was $2.51, but the company recorded a multitude of non-cash charges for FY 2014. The largest was an adjustment of ($0.77) during Q4 FY 2014 for pension costs. Meanwhile, cash flow growth remains strong.

S&P Capital IQ predicts that EPS will grow at a compound annual rate of 5% over the next three years, which wouldn’t be far off from what the company generated over the last decade using the adjusted EPS for last fiscal year.

Not a high-growth play, but one invests in T for its juicy dividend…

The stock yields a very appealing 5.74% right now. Not only is that substantially higher than the broader market, but it’s also well above the 5.4% yield the stock has averaged over the last five years.

What’s really great here is that T doesn’t provide just a monster yield. They’re actively increasing their dividend year in and year out and have done so for the last 31 consecutive years.

This qualifies the stock as a “Champion” on David Fish’s Dividend Champions, Contenders, and Challengers list, the invaluable resource that tracks more than 700 US-listed stocks with at least five consecutive years of dividend increases.

The dividend growth rate isn’t much to write home about – at just 3.9% over the last ten years.

But it’s still attractive in an environment with low inflation.

Moreover, you’re getting that big yield right off the bat. And the dividend growth does provide for some purchasing power protection.

Meanwhile, a payout ratio of 81% (using adjusted EPS over the last four quarters) is fairly high, but not immediately concerning. I’d expect T’s recent dividend growth to continue for the foreseeable future. They’ve been increasing the quarterly dividend by one cent since 2009, and that appears poised to continue.

Moving over to the balance sheet, we can see pretty typical leverage for an asset-heavy business model with a heavy focus on infrastructure. The long-term debt/equity ratio is 0.87 (as of last fiscal year) with an interest coverage ratio below 4. These numbers could be greatly improved upon, but they’re also not out of line for the industry.

Looking at profitability, we can see that it’s pretty robust in general and for the industry. Over the last five years, the company has averaged net margin of 8.65% and return on equity of 11.19%. Net margin in particular is pretty impressive, and compares very favorably to major competitor Verizon Communications Inc. (VZ).

Summing it up, this is a defensive, high-yield investment. I’m a shareholder, happily collecting that huge dividend. And it sits right alongside many stocks with much lower yields and better growth prospects, balancing the portfolio out.

They foresee consolidated revenue growth in line with GDP growth or better, adjusted EPS growth in mid-single-digit range or better, and improving free cash flow over the next three years.

Data consumption and content consumption don’t appear to be going anywhere anytime soon. And communication remains as important and prevalent as ever. This appears to be a fairly intelligent long-term play on those broader themes.

Altough, risks are present. Primarily, the industry is brutally competitive with frequent price wars. In addition, technological obsolescence is something to be mindful of, and we see that in the cannibalization of their wireline customers.

All in all, I think this is a solid investment to consider, especially if you find the need for plenty of current income. The company is certainly well positioned to continue pumping out that big dividend for the foreseeable future while also growing it at a modest rate. Cord-cutting also remains a greater risk with the recent acquisition of DIRECTV.

The valuation on the stock, using adjusted TTM EPS, shows a P/E ratio of 14.13. That appears to be a reasonable discount to the broader market, which is trading for a P/E ratio near 19 right now.

I valued shares using a dividend discount model analysis with an 8% discount rate and a 2.5% long-term dividend growth rate. That growth rate is in line with recent historical dividend growth and what I foresee as likely moving forward. The DDM analysis gives me a fair value of $35.04. That indicates the stock is roughly 7% undervalued right now. 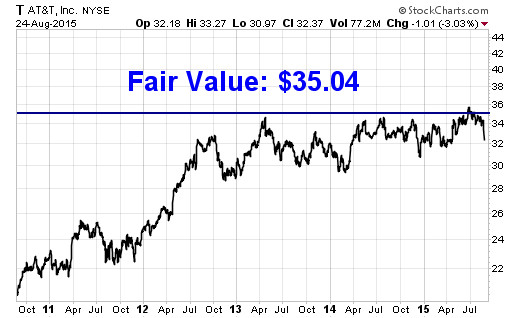 Bottom line: AT&T Inc. (T) is a huge player in the wireless market. And acquiring DIRECTV has transformed the company into the world’s largest pay TV provider. Their primary products and services are ubiquitous, with millions of people in the US and Latin America signing up for subscriptions (that provide recurring and visible revenue) for access. And a monster yield of 5.75% provides plenty of income while the company continues to earn billions providing that which people demand. This is a defensive, high-yield holding that should be considered here.