[ad#Google Adsense 336×280-IA]The best time to invest in natural resources is when everyone hates them.

And coal is probably the most hated fuel in the U.S. today…

Some U.S. politicians are working to put coal-fired power plants out of business.

And abundant natural gas supplies have pushed coal demand down over the past few years.

In April – for the first time ever – more electricity in the U.S. was generated using natural gas than coal.

Things are only going to get worse… The U.S. Energy Information Administration (EIA) expects the U.S. electric-power sector will consume 7% less coal this year than last.

But this is creating a great contrarian opportunity…

As demand for coal in the U.S. has dropped, so has its price. Coal prices briefly peaked at more than $130 per ton in June 2008. The price of benchmark Big Sandy coal is $50 per ton today. Shares of coal producers have plunged, too. The Market Vectors Coal Fund (KOL) – which holds a basket of coal stocks – is down more than 70% over the past four years. 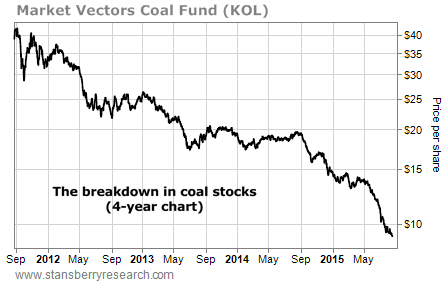 Several companies have filed for bankruptcy over the past year. In just the past three months, notable coal producers Alpha Natural Resources, Walter Energy, and Patriot Coal, have all filed for Chapter 11 bankruptcy protection. Even America’s second-largest coal producer, Arch Coal, is on the verge of bankruptcy.

Many companies are also selling their coal-related assets.

For example, Patriot Coal is in its second bankruptcy this decade. When it filed for bankruptcy in 2012, it attempted to restructure. It removed liabilities and exited bankruptcy as a leaner organization.

But that wasn’t enough… Patriot Coal was forced to file for bankruptcy again in May. It has now entered into agreements to sell all of its assets to pay its debts… including its two remaining West Virginia mines to a nonprofit environmental group, which will only run one of the mines.

And late last week, investment bank Goldman Sachs sold its coal operations in Colombia to U.S. coal company Murray Energy. Goldman had spent more than $600 million on the assets. But it sold them for less than $10 million.

This is exactly what contrarian investors like to see.

Right now, everyone is leaving the coal sector. Unprofitable mines are being shut down. Assets in the sector are selling for pennies on the dollar because no one wants them. The EIA expects coal production in the U.S. to fall by 83 million tons this year. That’s more than 8% of last year’s production.

But, you see, natural resources, like coal, are tremendously cyclical. That means their prices move in waves. They go through big booms and busts.

And contrary to what most folks think, coal isn’t going out of style. Growing nations, like India and China, are still consuming large amounts of the stuff. According to the International Energy Agency, global coal demand will grow at an average rate of 2.1% per year through 2019. Eventually, increasing demand and decreasing production will push coal prices higher.

It’s still too early to say that coal has bottomed. But we’re getting close.

One positive sign for the sector is that billionaire investor George Soros just bought stakes in industry leaders Peabody Energy and Arch Coal. The investments are small compared with his overall portfolio, but they show sentiment is starting to improve.

If you’re looking to profit in the sector, add the below producers to your “watch list.” They’re the only four U.S.-listed coal companies with less debt than their market cap. This means their lenders are less likely to force them into bankruptcy than their peers.

We can also look at the companies’ cash balances and cash they generate from operations to confirm that they can service their debt.

CNX Coal Resources (CNXC) just went public at the end of June. So it’s too early to report on its operations. But the other three companies are operating well in the midst of a tough market.

Alliance Resource Partners (ARLP) and Alliance Holdings (AHGP) are regular dividend-raisers. They have increased their dividends for 29 quarters in a row. SunCoke (SXC) has only paid four dividends since November 2014, but it has increased the dividend each of those times.

So not only are these companies surviving despite low coal prices… but Alliance Resource Partners, Alliance Holdings, and SunCoke Energy are still rewarding shareholders. When the market turns around, they’ll be some of the first stocks that investors turn to. Look to add a few of these coal producers to your portfolio as soon as we see coal prices bottom and start to move higher.