If anything, the prospects for global growth have started to lessen further in recent weeks.

After miserable economic readings from China, extraordinary measures taken to halt a big stock decline, and a devaluation of the Chinese currency, no one should believe their economy is growing at the “official” level of seven percent.

[ad#Google Adsense 336×280-IA]Europe also just posted worse than expected second quarter GDP growth even as the continent is about to finalize the latest “extend and pretend” bailout for Greece.

Elsewhere in Asia, the Japanese central bank just lowered their forecast for growth this year to 1.7% from two percent previously.

Korea just posted their worst quarterly growth readings in six years and Australia continues to suffer because of the collapse in commodity prices including that for iron, copper and coal.

Investors should be doing what they can to help insulate their portfolios from these headwinds.

The Bloomberg Commodity Index is at 13-year lows and oil just touched levels not seen since the tail end of the financial crisis.

With the dollar continuing to strengthen and the global economy weak; this pain could go on for quite some time.

Before all is said and done, there will myriad additional bankruptcies throughout the energy and mining sectors. I want no part of that and feel it too early to try to “bottom fish”. Commodity-based economies like Brazil, Australia, and Canada will also continue to be under immense pressure.

American multinationals that get a large percentage of their overall sales from outside the United States have seen some major currency hits that have impacted both revenue and earnings growth. This is likely to continue for the next couple of quarters especially with China recently devaluing the Yuan which is also helping to weaken currencies across Asia.

I would avoid or underweight names like IBM Corp. (NYSE: IBM), McDonalds (NYSE:MCD), Johnson & Johnson (NYSE: JNJ) and other large firms that get a large proportion of their revenues overseas. The combination of weak demand and a strong dollar is likely to continue to push down revenues and earnings for quarters to come. 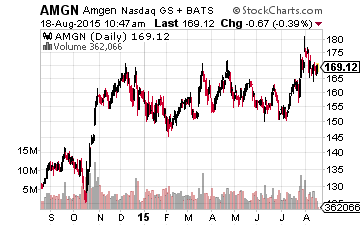 Instead, I would be using the recent pullback in the biotech sector to start to accumulate some of the core positions that make up the foundation of the Biotech Gems portfolio.

Not only are these companies showing solid revenue and earnings growth, they are also selling at reasonable valuation levels.

If we do get a decent decline in the market, they are good stocks to add to or initiate a position in. Yes, they do have overseas sales. However, not to the extent of some of the other companies highlighted above. In addition, it is a lot easier to absorb a five to 10% currency hit when your gross margins are north of 80% and not south of 30%.

Global growth is now projected to come in at its weakest level in 2015 since 2009 despite the best efforts of world’s central banks to supply extraordinary liquidity support to the markets and the economy. This is one reason interest rates have started to fall again after a nice spike after the end of the first quarter.

Correspondently, the high yielding real estate investment trust sector has started to perform better after a tough second quarter as interest rates have drifted down on tepid global growth. This sector also has the advantage of little exposure to a strong dollar or dismal overseas demand.

I continue to like the hotel part of the REIT space thanks to annual RevPAR (Revenue per available room) growth in mid to high single digits and increasing occupancy levels. Summit Hotels (NYSE: INN) is a good buy here after the shares have come down 15% from previous highs. Both revenues and earnings should increase in the teens this year and the stock is not expensive at 11 times this year’s projected FFO (Funds from operations). This lodging REIT yields almost four percent and has seen insider buying this month. 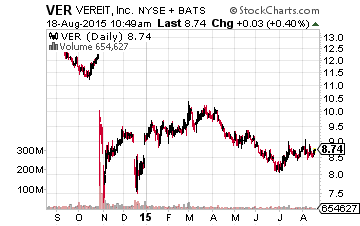 The company has brought in new management, simplified its capital structure and just reinstated its dividend with a yield of approximately six percent.

The REIT is selling at a steep discount to peers in its space, something that I expect to narrow as the company puts its recent troubled past behind it. In the meantime, an investor collects a nice juicy dividend yield.

In summary, tepid global growth and a strengthening dollar are likely to continue to be themes through at least year end. Investors should take measures to counteract their impacts within their portfolios, and move into higher-growth industries that are protected from the headwinds I talked about today.

Sponsored Link: One of the sectors that I prefer most and that has had the highest earnings growth out of all of the market is the healthcare sector, and my Biotech Gems portfolio is positioning investors for long-term returns by creating a complete portfolio of small and large cap stocks.

This sector is where I have found the most lucrative returns in my entire 30+ year investing career, and I do not see that changing anytime soon. We have already had one big winner in the portfolio returning 60% since being recommended in June, and I expect many more as we build out our portfolio. Click here to learn more.