The stock market is such a fun and interesting place.

You have thousands of publicly traded stocks out there, representing small slivers of ownership in real companies.

It’s just an incredible opportunity, which is why it’s such a shame that more people don’t regularly invest.

But I believe that the volatile nature of the stock market scares people off, which is also a shame.

You don’t stop going to the grocery store because prices go up and down every single week, do you?

Of course not. You buy when things are on sale.

Stick to your list. And get what you need.

I see the price of hamburger meat change all the time down at my local grocery store.

But I know the value of that meat doesn’t change all that much. So I simply buy when the price is right.

Well, that same mentality should hold true for stocks as well. Prices might zigzag all over the place, but the actual value of stocks doesn’t change that much from day to day.

Deciphering the difference between price and value doesn’t need to be particularly difficult if you’re aimed with the proper tools – I’d recommend reading through Dave Van Knapp’s lesson on valuing dividend growth stocks if you haven’t already.

Once you’re equipped with that ability to separate price and value, the stock market becomes a much less scary place. In fact, it becomes a very exciting place because you now have all of these incredible opportunities right in front of you.

Being able to buy a stock for less than it’s actually worth is one of the great pleasures in life.

Paying less than fair value first gives you a margin of safety. That way even if something goes wrong at the company level or your predictions aren’t quite accurate enough, you still got in at a great price which should minimize your downside.

In addition, getting a great deal means you maximize your chances to make money.

First, you receive a higher yield on your investment. All else equal, a lower stock price will mean a higher yield since price and yield are inversely correlated.

Second, you add the potential of capital gains. If you pay $40 for a stock that’s really worth $50, the odds are pretty strong that at some point that value will be recognized and the stock will be repriced accordingly.

I keep all of this in mind as I build out my portfolio, which recently shot past $200,000 in market value.

What you’ll notice if you take a look at my portfolio is that I almost exclusively focus on stocks that not only pay dividends, but routinely and regularly increase those dividends.

These “dividend growth stocks” earn my capital because they take care of shareholders. As a business partner, I expect my fair share of profits. And as profits grow, so should my cut.

While my portfolio is a good reference point, the ultimate resource for these stocks is David Fish’s Dividend Champions, Contenders, and Challengers list.

It’s an absolute bonanza of information, containing the names of and pertinent stats on more than 700 US-listed stocks that have all increased their dividends for at least the last five consecutive years.

Since that list is a microcosm of the entire universe of available stocks, one should expect that some are undervalued and some are overvalued at any given point in time.

Well, I recently came upon a stock on Mr. Fish’s list (and one that’s also in my portfolio) that appears to not only be undervalued right now, but potentially significantly so.

BHP Billiton PLC (BBL) is the world’s largest diversified resources company. They’re engaged in the exploration, development, processing, and production of a number of minerals. They also have a substantial oil & gas business.

Like any company focusing on commodities, BHP Billiton’s revenue and profit can oscillate from year to year as a business cycle wears on.

However, what’s definitely not been cyclical over the last decade or so is the company’s track record for paying and increasing a dividend.

They’ve grown their dividend payment to shareholders for the past 12 consecutive years, which is fairly impressive considering the cyclical nature of its business.

Over the last decade, the company has been able to increase the dividend at an annual rate of 21%. However, recent dividend raises have been much lower, reflecting recent weak pricing for many of the resources they extract – the most recent increase was just over 5%.

While dividend growth has not surprisingly slowed as of late, the stock more than makes up for that with an extremely high yield of 6.87%.

It’s not often you get a yield near 7% on a company that’s the largest and most dominant in its field.

Keep in mind that’s almost twice as high as the five-year average yield for BBL.

However, a moderately high payout ratio of 66.3% means dividend growth over the foreseeable future will likely be minimal, especially if the current environment (higher volatility and lower pricing) for iron ore, copper, and oil persists.

Now, as mentioned, pricing for the resources that BHP Billiton explores for and produces can be volatile. And the company lacks true pricing power, being relegated mostly to a price taker. However, massive scale allows them to be a low-cost producer, helping them produce pretty solid results.

We’ll take a look at what top-line and bottom-line growth looks like over the last decade, which happens to coincide with the start of a downturn. This will help us determine a reasonable estimate as to what the company might be worth.

Rather considerable growth there over the last decade. However, the company benefited from strong demand for its commodities over that period, and demand has softened as of late.

S&P Capital IQ anticipates that EPS will compound at a 3% annual rate over the next three years, reflecting the current environment for BBL’s core products. Renewed focus on those core products after a recent spin-off, however, could provide some upside.

Meanwhile, the company maintains a conservative balance sheet, which should help it weather any short-term storms. A long-term debt/equity ratio of 0.38 and an interest coverage ratio of approximately 37 both indicate that BHP Billiton has plenty of financial flexibility.

Profitability helps to further show just what kind of high-quality firm this is. Over the last five years, the company has averaged net margin of 23.43% and return on equity of 27.22%. Both metrics far exceed any major competitors. This is just an extremely efficient resource giant.

Investing in commodities isn’t for every investor. But if you’re looking for exposure, I can’t think of a better company at a better time. BHP Billiton is, holistically, the highest-quality, largest, and most diversified natural resource company I’ve ever come across. And with the cycle moving against them, the stock appears cheap.

The stock’s P/E ratio sits at 9.64 right now. Admittedly, that’s a bit deceiving because lower earnings haven’t worked their way through the books yet. But the stock price has fallen so far so fast that it seems like most of the shock is already baked in. That P/E ratio is about half the broader market. It’s also quite a bit lower than the five-year average P/E ratio of 12.7 for this stock. Notably, it’s near book value right now.

Appears to be very cheap. But what’s the fair value? What kind of deal might we be getting here?

From my perspective, this stock is cheap. Extremely cheap. But I’m not the only one out there eyeing this stock. Let’s compare my opinion with that of some professionals that track this stock and have taken the time to value it.

Morningstar rates BBL as a 4-star stock, with a fair value estimate of $45.00.

My estimate came in aggressive, but I just don’t think the company is permanently impaired. Averaging out the three numbers so as to come to a consensus gives us $48.05. That would indicate this stock is potentially 33% undervalued right now. 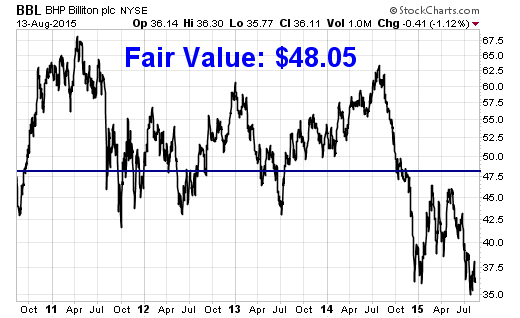 Bottom line: BHP Billiton PLC (BBL) exudes quality across the board. No natural resource company is as dominant, efficient, or reliable. On top of all that, you’re getting a yield near 7% with the possibility for 33% upside right now. The last time the stock was priced this low was during the financial crisis, but the company is now larger and paying a bigger dividend. This could be a huge long-term opportunity if you can deal with short-term volatility.