While the broader stock market has been in a recent mini-slump, a group of social media stocks have stumbled very badly.

Shares of Twitter (NYSE: TWTR) and LinkedIn Corporation (NYSE: LNKD), for example, have slipped 15% to 20% in just a few months — in sharp contrast to Facebook (Nasdaq: FB), which remain near all-time highs.

How Do Advertisers See Social Media?

To see the social media as advertisers do, investors only need to put themselves in marketers’ shoes.

Which sites offer the audience I want and can drive appreciable traffic back to the product?

Research firm Shareaholic found that 31% of traffic to websites originated from social media in the fourth quarter of 2014, up from 23% the year before.

Of that traffic, Facebook accounted for 25% of traffic (79% of all social media referrals) followed by Pinterest, which originated 5% of the traffic. Twitter and LinkedIn originated just 0.8% and 0.03% of website social referral traffic. Worse still for the two lagging networks, their share of traffic origination has continuously fallen over the last three years. 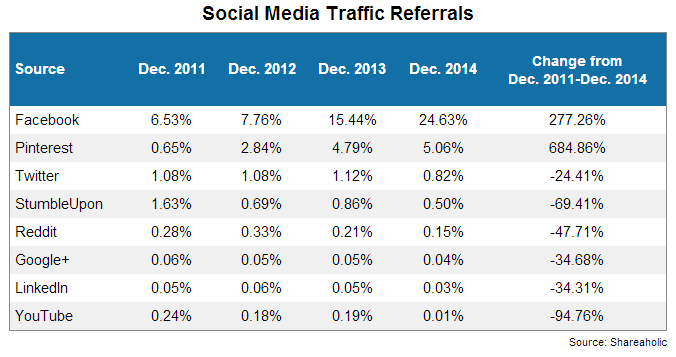 If the smaller two social media sites do not send a large amount of traffic to other websites, they would need to make up for it with a more engaged and active audience.

Another concern: Investment firm Cowen & Co. has found that neither Twitter nor LinkedIn are among the most popular sites in terms of daily usage.

This isn’t to say that Twitter and LinkedIn do not offer some advertising appeal, especially LinkedIn’s focus on the business-to-business market, but neither site offers the engagement or traffic origination which advertisers seek.

In terms of monthly active users (MAUs), Facebook is also dominant: its user base is four times larger than the user bases of LinkedIn or Twitter. While the ability to reach hundreds of millions of active users still gives LinkedIn and Twitter some advertising appeal, the time spent per user and the frequency that users click through to a target site diminish their value to marketers.

Facebook’s second quarter results bear out these trends. Revenue rose 43% from a year ago (to $3.83 billion), which led to consensus-beating profits. The company is expected to post $17.2 billion in revenue for 2015 which puts its stock price at 12.3 times sales. Sales are expected to rise 35% in 2016 to $23.2 billion.

Twitter shares plummeted 14% on July 28 when it reported that quarterly user growth rose at the slowest pace since 2013. The company is expected to post $2.23 billion in revenue for 2015, which puts its stock price at 8.9 times sales. Sales are expected to rise 45% next year to $3.23 billion.

As a social media marketer myself, I am not going to spend advertising money or much time on platforms that do not bring organic traffic to my websites. Investors are starting to realize what advertisers have already known, and they may begin to re-evaluate lofty expectations for future sales growth at the smaller social platforms.

While valuations have come down significantly, price-to-sales ratios are still well above other online ad-based properties such as Google (Nasdaq: GOOG) which is valued at just 2.9 times projected 2015 sales of $74 billion.

Facebook spent just $550 million in capital expenditures last quarter, well short of expectations for $702 million. With $14.1 billion in balance sheet cash and $4.4 billion in free cash flow over the last year, it may not be long before the company institutes a dividend or a buyback program. Either move would be a catalyst for the shares.

Even if Facebook’s valuation comes down slightly to 11 times forward sales, the shares could reach my target of $114 next year. My buy-under price of $100 per share offers 14% upside.

Risks to Consider: Shares of LinkedIn and Twitter have come down considerably and may benefit from a quick bounce. Resist the temptation to buy the bounce as these two networks may see more long-term weakness.

Action to Take –> Facebook (Nasdaq: FB) may be valued more richly than other social media peers, but dominates the space and should meet expectations going forward. Take advantage of recent weakness on the social media sell-off to increase positions.

Sponsored Link: Innovation, like you’ll find at so many social media companies, is often a great place to look for growth opportunities. Recently, Dave Forest, the strategist behind Top 10 Stocks, has been talking about one of the greatest innovations to come out of America in decades. It’s been dubbed “Sky-Fi,” but others are calling it “Internet 3.0.” Either way, this is a mega-trend that investors can play in the coming months. If you’d like to learn more about this innovation, click here to see our research on the topic.