The stock market is an interesting place.

But the prices of those slivers of ownership vary. Heavily. Every single day.

That doesn’t strike me as particularly efficient, since the odds that a major company is worth millions or even billions of dollars more or less overnight are very low.

They look at the prices and let those prices guide them.

But that’s the wrong way to do it.

You should let value guide your stock purchasing and/or selling decisions.

Value tells you what you’re getting in return for the money you’re spending.

I think people instinctively have a grasp on this.

After all, if your local fast food joint decided to start charging $20 for cheeseburgers, you’d laugh and walk away. That’s because you know that cheeseburger isn’t worth $20.

But for some reason, people seem to lose this instinctive nature when it comes to stocks.

Doesn’t have to be that way, though.

Take a look at Dave Van Knapp’s valuation lesson on dividend growth stocks, for instance. A system like that gives you the tools necessary to separate price from value, and let opportunities come to you.

Once you’re able to decipher the difference between price and value, it’s repeatable. It puts you in control.

And this lesson is something I’ve kept in mind as I’ve built out my own personal portfolio, which is now filled with 64 different high-quality dividend growth stocks, and valued at more than $200,000.

These “dividend growth stocks” are primarily what I buy because I’m then able to largely filter out low-quality companies. After all, a low-quality company is unlikely to be in a position to even pay a dividend in the first place due to poor profitability. But growing a dividend for years or decades in a row is another beast altogether.

While my portfolio is a microcosm of the universe of available dividend growth stocks, David Fish’s Dividend Champions, Contenders, and Challengers list expands on that greatly, and is basically the universe.

That’s because it lists every single US-listed stock that has increased its dividend for at least the last five consecutive years.

What I like to do is see if I can find stocks on Mr. Fish’s list that exhibit all of the qualitative and quantitative qualities I’m after. And then I see if that same stock is undervalued, preferably significantly so.

I recently found such a stock. And I also recently initiated a position in the company after taking a look.

Even better, I’m going to share that name with you readers today!

United Technologies Corporation (UTX) is a diversified conglomerate that manufactures and markets a variety of products across the building systems and aerospace industries.

This company has roots dating back to the early 1930s, and is now one of the world’s largest industrial firms.

It was recently announced that the company would be selling off its Sikorsky helicopter business to Lockheed Martin Corporation (LMT) for $9 billion, which, in my view, is a good move.

Although Sikorsky accounted for approximately 11% of their fiscal year 2014 revenue, it only accounted for about 2% of their FY 2014 operating profit. That’s an operating profit margin of just 2.9%, which is significantly below the rest of the company’s segments. And this has been declining sharply lately. Meanwhile, it diversifies the company away from government defense spending, which has been contracting lately.

The proceeds will be used to buy back shares so as to offset the reduction in earnings.

But the market didn’t seem to like this news. When combined with slightly reduced guidance that came with Q2 2015 financial results, the shares went into free-fall mode, and the stock is now down more than 14% on the year.

The company has increased its dividend to shareholders for the past 22 consecutive years.

And over the last decade alone, the dividend has grown at an annual rate of 12.9%.

UTX currently yields 2.59%, which, when combined with that long-term dividend growth rate, seems to offer a very appealing total return proposition. Furthermore, the current yield is well above the stock’s five-year average of 2.2%.

So there’s a lot to like there with the dividend metrics.

But what about the company’s underlying growth?

We’ll see how much the company has grown over the last decade, which will give us some clue as to what to expect for the future. Moreover, it’ll help when it comes time to value the company and figure out what we should pay for shares.

Not overly fantastic top-line growth, but they’ve done something pretty special with that.

More like it. Strong buybacks – the outstanding share count is down by about 10% over this period – and improving margins (even with Sikorsky) helped propel that excess bottom-line growth.

S&P Capital IQ is calling for 11% compound annual growth for EPS over the next three years, which isn’t far off from what they’ve managed over the last decade. The move away from Sikorsky could help their cause over the short term.

A long-term debt/equity ratio of 0.57 and an interest coverage ratio of approximately 9 both compare fairly well to competitors. I think there’s some room for improvement here, but nothing concerning.

Profitability is robust with improving margins as of late. Over the last five years, the firm has averaged net margin of 8.86% and return on equity of 21.12%. I also see some potential room for improvement here. But there’s nothing to be unhappy about.

Overall, this is a high-quality business across the board. Excellent profit growth on a per-share basis over the last decade, solid fundamentals, and a dividend growth track record that reeks of shareholder friendliness.

As such, we might expect a premium on this stock. Is that the case?

The stock’s P/E ratio is 14.18 right now. If that seems low to you, that’s because it is. The broader market is sitting at a P/E ratio of about 21. And UTX’s five-year average is 16.4. There’s definitely no premium here.

The stock definitely appears cheap. But how cheap? What’s the intrinsic value on shares?

I believe we have a cheap stock here. And the dividend growth rate I used when valuing the stock is very conservative relative to their long-term track record. But I’m not the only one looking at this stock here.

Looks like there’s agreement here on UTX definitely being priced lower than what it’s really worth. I like to average out the three figures, which provides clarity with just one number. That final number is $113.36. So we’re looking at a stock that is potentially 15% undervalued right now. 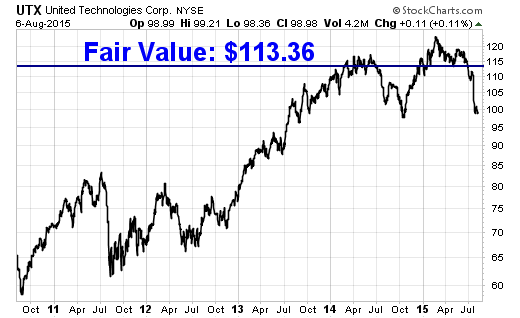 Bottom line: United Technologies Corporation (UTX) is a high-quality conglomerate, providing some of the most well-regarded products in their respective markets. They’ve been increasing their dividend for the past 22 consecutive years and there’s no end in sight. A recent restructuring announcement sent the stock into a tailspin, but the possibility of 15% upside and a yield well above its recent historical average is an opportunity that should be strongly considered here.