It’s part of the American Dream.

While you can debate the financial and lifestyle merits of renting versus buying your primary residence, there’s no doubt that many people across the country prefer owning their abode.

And there have been many reports released recently that seem to suggest that there’s pent-up demand for housing. Many people who have put off buying a house due to financial concerns are now becoming more optimistic as the economy recovers and unemployment continues to drop.

Founded in 1978, Home Depot is now the largest home improvement specialty retailer in the world.

As such, they’re in a fantastic position to capture a piece of the growing pie that is home improvement.

They operate more than 2,200 stores throughout the US, Canada, China, and Mexico.

And stores average 105,000 square feet with approximately 23,000 additional square feet of outside area.

Being this large affords the company massive economies of scale, and allows them to be the low-cost supplier of products. They’re effectively the Walmart of home improvement stores.

Customers know they can walk in a Home Depot and have access to more than 40,000 products with an additional 250,000 products that can be special ordered. That scale and one-stop shopping gives them competitive advantages that are difficult to overcome for competitors.

In addition, Home Depot is known to train its staff well and pay them an attractive wage, leading to a better customer service experience that places a high priority on service and knowledge.

So let’s see what Home Depot has done with this business model over the last decade by looking at their top-line and bottom-line growth.

Revenue growth took a substantial hit during the financial crisis, which, of course, included a housing meltdown. If people aren’t able to keep their homes, they’re certainly not interested in home improvement. Growth has been strong since FY 2010, however, picking up nicely with the economy.

Bottom-line profit has shown a much better growth trajectory, though. Earnings per share is up from $2.72 to $4.71 over this period, which is a CAGR of 6.29%.

Home Depot has done a lot with very little revenue growth. Primarily, strong share buybacks drove a lot of that excess profit growth on a per-share basis. The outstanding share count has been reduced by approximately 37% over the last decade, which is significant.

S&P Capital IQ is predicting that EPS will grow at a 16% compound annual rate over the next three years, which would be more than twice the growth rate over the last decade, if it were to come to fruition.

The aforementioned recovery in housing is modeled into that growth, and continued buybacks will also help fuel results. An $18 billion buyback program, announced in February 2015, will continue the trend we see above.

I love buying these kinds of stocks not just for the tangible cash flow that’s growing, but also for the prudence management must have in order to send increasing checks to shareholders for years on end.

Home Depot is such a stock – a “dividend growth stock”. It has increased its dividend to shareholders for the past five consecutive years after holding it static during the financial crisis.

This qualifies them as a “Challenger” on David Fish’s Dividend Champions, Contenders, and Challengers list – that’s a document that tracks more than 700 US-listed stocks that have all increased their dividends for at least the last five consecutive years.

Not the longest streak around, but they make up for the slightly short streak with really solid growth over that time frame. Over the last five years, the company has increased its dividend at an annual rate of 15.3%.

That dividend growth is more in line with EPS growth over the last five years.

And even with that high growth rate, the company still maintains a pretty modest payout ratio of only 47.9%.

So that means less than half of its earnings are going out to shareholders in the form of a dividend, leaving the company plenty of cash to continue growing the business. This also gives them flexibility in terms of growing the dividend in the future.

Meanwhile, the stock yields 2.03% here. That’s slightly above the broader market and more or less in line with HD’s five-year average.

One concern I do have about this business, however, is the balance sheet. While not immediately concerning in and of itself, it has deteriorated somewhat considerably over the last decade. However, this isn’t uncommon among many major companies, since low interest rates have prompted businesses across the economic sectors to use attractively priced debt to buy back more expensive equity.

This has resulted in a long-term debt/equity ratio of 1.74 and an interest coverage ratio of approximately 13.

Profitability, however, is impressive. While retailing is fraught with razor-thin margins, Home Depot sports rather strong numbers here. Over the last five years, the company has averaged net margin of 6.19% and return on equity of 31.52%. Both numbers crush major competitor, Lowe’s Companies, Inc. (LOW).

Home Depot didn’t become the world’s largest home improvement retailer by accident. They did so by meeting demand in the market across selection, pricing, customer service, and overall experience.

And with a potential ramp-up in housing demand, the company could be set for a nice run in growth.

With or without major housing growth, however, shareholders should continue to receive a healthy chunk of the sizable profit Home Depot generates year in and year out.

The $18 billion buyback announced earlier this year will reduce the company’s share count, meaning the profit is being spread out across fewer shares. And a 25.5% dividend increase announced at the same time means shareholders are seeing a major increase in their purchasing power in an environment where inflation remains low.

Caution might be warranted here, although there appears to possibly be an inflection point in housing which could result in larger-than-usual growth for the company. Nonetheless, there’s a clear premium on the stock right now.

I valued shares using a dividend discount model analysis with a 10% discount rate and a 7.5% long-term dividend growth rate. I think that growth rate is fair considering the long-term EPS growth rate and the fact that the dividend was held static during the financial crisis.

But a moderate payout ratio, the possibility for aggressive underlying profit growth moving forward, and recent dividend growth increases my enthusiasm. The DDM analysis gives me a fair value of $101.48. That price would result in a P/E ratio in line with the five-year average. 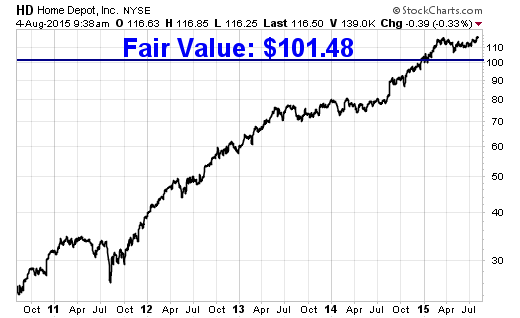 Bottom line: Home Depot Inc. (HD) is a high-quality retailer, and by far the largest in their niche. Although the housing bust clamped growth, the company is coming back with a vengeance. Sizable dividend growth and buybacks bode well for shareholders, as does a potential major recovery in housing. However, the stock appears to be priced at a premium here. A 10% pullback on this name could offer investors a chance to remodel their portfolio with this king of home improvement.