The price of oil has many investors panicked…

Over the past couple weeks, the U.S. benchmark crude oil price, West Texas Intermediate (WTI), is down nearly 15%.

On July 6, the price fell nearly 7%. It was the fourth-largest daily decline in the past five years.

But as I’ll explain, this sharp decline is good news for oil investors…

As you can see in the chart below, the price of oil was relatively stable for nearly two months before the huge drop on July 6… 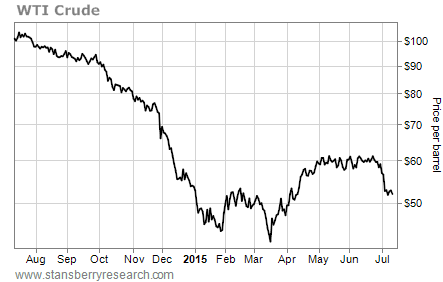 The recent fall in the oil price from above the $60 level was driven by news from Iran (see below) and an unexpected excess of oil “stocks.”

[ad#Google Adsense 336×280-IA]OThis is the volume of oil, gasoline, and other products in storage in the U.S.

Analysts surveyed by the Wall Street Journal forecasted crude oil stocks would fall by a million barrels in the week that ended July 3.

The forecast made sense. Low oil prices drove producers to cut back.

The number of rigs drilling wells is down by more than half over the past year.

Supply should have fallen… but it didn’t. Instead of a one-million-barrel decline, the crude oil supply rose by nearly one million barrels. This is because producers have been drilling more efficiently over the past several years.

This is a continuing trend. In the below chart, we combined crude oil and its related products. As you can see, they’ve been moving higher for more than a year now. 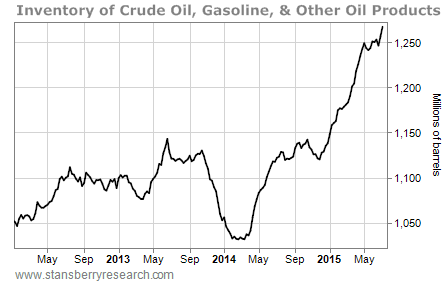 Inventories aren’t falling off yet… And that is driving oil prices lower. Complicating that is the Greek turmoil and the potential increase in Iranian oil production if sanctions are lifted. Iran says it will increase oil exports by a million barrels a day if it can reach a deal on its nuclear activity with the U.S. and other world powers.

For now, it’s a bearish outlook. And investors are scared… The SPDR S&P Oil & Gas Exploration & Production Fund (XOP) is down 20% since the beginning of May.

But, if we are patient, this weakness will provide us with an opportunity to get some great deals on oil and gas producers. Right now, oil inventories are at a peak. But when the supply levels out, share prices move higher. And inventories commonly flatten in the latter part of the summer prior to falling by year’s end. Since 2009, inventories have peaked between July and October.

In the October 2013 Stansberry Resource Report, we bought oil and gas producer Penn Virginia (PVA) within 0.3% of the year’s peak in oil inventories. Penn Virginia was oversold. We rode the purchase to a 119% gain in seven months.

We aren’t ready to buy yet, but we’re getting closer. I’m looking for inventories to level off first.