There are a few products and/or services in the world that are absolutely necessary and ubiquitous.

And, generally speaking, the companies that provide these limited products and/or services to the world tend to do quite well over the long haul due to their position.

Just imagine if you owned a company that provided part of the world with something it literally can’t do without.

Well, that’s the exact spot that Republic Services, Inc. (RSG) is in.

Republic Services is in the very necessary and very lucrative waste management industry.

Collecting and managing waste is a service that millions of people across the country require every single day.

Just imagine if this company stopped collecting and managing waste for even a week. Imagine the chaos!

The services this company provides are those that people truly cannot live without.

Republic Services, Inc. is the second-largest provider of waste management services in the US, with operations across 39 states and Puerto Rico.

Trash can be a dirty business, which is why so few people want to take care of it themselves. But in that lies an opportunity, and RSG has taken advantage of that.

And that opportunity means money. Republic Services primarily derives revenue by charging their customers (residential, municipal, commercial, and industrial) fees to haul their trash away and dispose of it.

But the company also makes money by accepting waste at one of their many landfills. In addition, they also recycle considerable waste, leading to additional income off of the very product they charge to haul away.

Solid growth here, though a merger with Allied Waste in 2008 came about on the cusp of one of the largest economic recessions this generation has ever seen, which has led to results that are more disappointing than they otherwise would have been.

S&P Capital IQ predicts that EPS will grow at a 10% compound annual rate over the next three years, which seems reasonable. Lower fuel costs and volume growth from an economy that’s bouncing back bode well for the company.

Now, I’m a dividend growth investor. I’m only interested in a stock if it pays a dividend. Furthermore, I tend to only invest in stocks that have lengthy track records of not just paying dividends, but also growing those dividend payouts for years and years (sometimes decades) on end.

You can see that by checking out my real-life personal portfolio, which I’ve carefully constructed over the last five years.

They’ve increased their dividend to shareholders for the past 12 consecutive years which qualifies them to be on David Fish’s illustrious Dividend Champions, Contenders, and Challengers list.

So that means shareholders aren’t only collecting a dividend for owning the stock, but the amount they’re collecting is growing year after year.

And it’s not just growing, but growing at a very attractive rate: The 10-year dividend growth rate for RSG is 18.1%. That means over the last decade, the dividend has increased at an annual rate of more than 18%.

Substantial, but recent dividend raises have been much smaller to compensate for the slower EPS growth.

What’s happened over the last decade is the dividend has grown much faster than that of profit, leading to an elevated payout ratio of 67.9%.

That means the company is sending out more than 67 cents of every dollar of profit out to shareholders in the form of a dividend, while retaining the rest to grow the company. It’s high, but not worrisome. However, future dividend raises will have to be more or less in line with EPS growth.

Meanwhile, the stock does yield a fairly solid 2.80% right now. That’s almost 90 basis points higher than the broader market, which is a sizable income advantage. It’s also in line with the five-year average for this stock.

One aspect of this industry that is a bit of a drawback, in my opinion, is the fact that it’s very capital-intensive to run a network of efficient waste collection. Trucks, landfills, and collection operations aren’t cheap. As such, most companies that operate in this space are highly leveraged.

You see that here with RSG as well: The long-term debt/equity ratio is 0.91 and the interest coverage ratio is below 4. These aren’t great numbers in absolute terms, but they are comparable to (and in some ways better than) the competition.

Profitability is robust, though I’m concerned with recent declines. Over the last five years, RSG has averaged net margin of 6.74% and return on equity of 7.15%. Solid numbers, but the trend has been down over the last four fiscal years.

I think there’s just a lot to like here. You’ve got a service that millions of people in the country quite literally can’t live without.

And RSG has a really attractive integrated business model with huge barriers to entry. After all, you can’t just go and build a landfill anywhere and start collecting local waste. Doesn’t work like that. There are heavy regulations in place in regards to where landfills can be built and maintained. Moreover, you have to consider that there is massive infrastructure in place that can’t be easily replicated.

In addition, the domestic waste collection industry is basically a duopoly that Republic Services and Waste Management, Inc. (WM) dominate with the majority of the market locked up when combined. Those long-term contracts are in place already, and the major players already in place are efficient at providing the service that people demand.

The fundamentals are fairly solid. And shareholders are being richly rewarded with growing dividends along the way.

As the economy and population grows, volumes should as well. There appears to be pent-up demand for housing, which would create additional potential business for RSG, not only through construction activity but also via additional clients down the road.

The waste collection business model is great for the long-term investor. You basically have a guaranteed revenue stream that should increase through population growth and inflation over time.

Consider as well that Bill Gates, through both the Bill & Melinda Gates Foundation Trust and Cascade Investment, LLC, owns approximately 30% of the company. So you have a pretty legendary businessman, investor, and philanthropist on your side with RSG here.

Risks, of course, should be considered, however.

The general economy and population growth (or lack thereof) can affect Republic Service’s results, as can be seen with their results through the Great Recession. Operations can be cyclical, although long-term contracts tend to smooth out those effects. The company also maintains a lot of leverage, which can limit flexibility. And the business model by its very nature is capital-intensive.

Looking at the valuation, the stock trades hands for a P/E ratio of 24.27 right now. That’s higher than the five-year average of 21.9, and it’s high in general. Of course, we’re looking at a stock market that’s also historically expensive right now.

I valued shares using a dividend discount model analysis with a 10% discount rate and a 7% long-term dividend growth rate. I’m perhaps being a bit aggressive here due to the low EPS growth and moderately high payout ratio. But I’m factoring in the forecast for growth moving forward, the stability of operations, and the potential for an economy that bodes well for the company. The DDM analysis gives me a fair value of $39.95, indicating the stock is roughly fairly valued now. 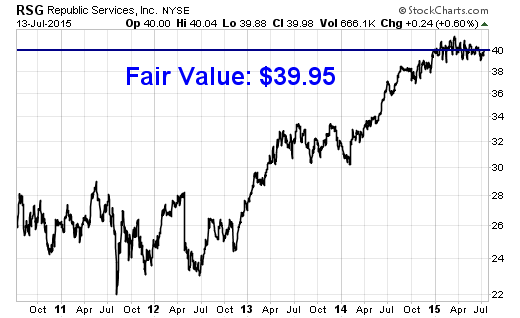 Bottom line: Republic Services, Inc. (RSG) provides a service that people can’t live without. With huge barriers to entry, a duopoly in the market, and long-term contracts locked up, the odds remain high that the company will continue to make plenty of money for shareholders for a long time to come.

That’s probably why Bill Gates is such a fan. The stock appears roughly fairly valued here, though without a margin of safety. If you’re looking for a utility-like investment with visible and recurring revenue, and you’re looking to invest alongside Gates, this stock is probably for you.