The financial markets are reeling…

[ad#Google Adsense 336×280-IA]Germany’s benchmark DAX index has lost around 10% since April. China’s stock market – the Shanghai Stock Exchange Composite Index – has crashed more than 20% in less than a month.

Long-term U.S. Treasury bonds are down about 15% since February.

The price of oil is rolling over again. And even gold can’t seem to catch a bid in this environment. 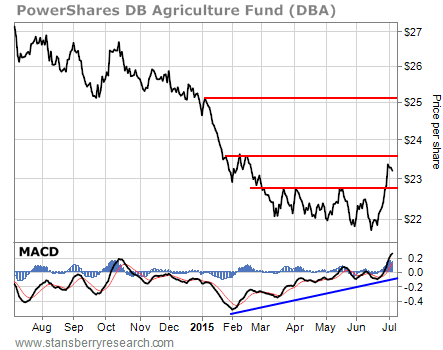 I tried to pick a bottom on this sector back in late February. Back then, DBA was trading around $22.80 per share and the chart looked like it was forming a “double bottom” pattern. It was an excellent low-risk/high-reward setup. But it didn’t work out.

DBA broke support at $22.80… And it has since spent four months trying to find a bottom.

Notice, though, how the moving average convergence divergence (MACD) momentum indicator was rising as the price of DBA shares was falling. This “positive divergence” was a sign that the momentum behind the decline in DBA was shifting from bearish to bullish. And the sector was overdue for a reversal.

That reversal started last week, when DBA exploded more than 5% higher in just three trading days and broke through resistance at $22.80 (previously support).

The strength of that move, along with the length of time DBA spent consolidating near the lows and the solid positive divergence on the MACD indicator, suggests this move has a lot further to run.

If DBA can break above resistance at about $23.50 per share, then there really isn’t anything to hold it back from reaching $25 over the next several weeks.

The sector is overbought in the short term. That often happens in the early stages of a new rally phase. So DBA is likely to come back down and retest the $22.80 level as support.

Traders should use that pullback as an opportunity to buy. Agricultural-commodity prices are headed higher… Make sure you’re in position to profit.