In True Wealth Systems, readers who followed my advice could have made more than eight times their money since 2012 in a simple biotech fund.

And just like in China, we don’t know when the big trend in biotech is going to end.

So how have we done it?

That’s how we’ve made a total of more than eight times our money in biotech so far since 2012.

Specifically, we’ve sold our position in this biotech fund TWICE and gotten back in again.

The lesson is, you can sell and still make big returns.

Here’s the breakdown of our actual trades:

In short, when the trade went against us, we sold. And when the boom kicked in again, we got back on board. We left our egos at the door.

This is the strategy you need to use in China today. And yes, I do still like China…

1. $400 billion is going to flow into Chinese stocks in the coming years. (That’s not just my opinion. That’s what MSCI, the leader in world stock market indexes, says. You can learn more about this from my recent DailyWealth essay here.)

2. Peter Churchouse says we’re in a bubble. Bubbles always end… but you don’t know how much higher they will go, or when they will pop.

Based on these two points, the ride in Chinese stocks will likely be extremely volatile – and potentially extremely profitable – over the coming years. But we can’t know that for sure. That’s why I urge you to follow your trailing stops closely. Please sell when it is time to sell.

If you had followed trailing stops when investing during this time, you would have pocketed a triple-digit return. If you didn’t, you wouldn’t have made any money.

So you need to be willing to sell when you hit your stops.

Having said that, I believe Chinese stocks could surprise the entire world ON THE UPSIDE.

NOBODY outside of China is invested in Chinese stocks yet. One way to see the lack of interest in China is by looking at Internet searches from U.S. investors for the search phrase “Chinese Stocks.” 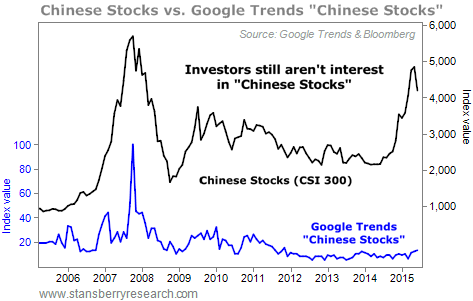 The excitement isn’t anything like 2007 yet. This is one indicator that tells me there’s still upside in China – most people have not yet invested in Chinese stocks.

The ride in Chinese stocks over the next three years or so will be volatile… But even after the big gains we’ve seen, our upside potential is still significant.

For you to maximize your potential and minimize your downside risk, you must follow your trailing stops. And you must be willing to get back in once China begins moving higher again.

Sponsored Link: I recently put together a presentation that details why now is the right time to put money to work in China. It all has to do with a coming announcement that will catapult China to even greater global importance. If you make the right investments today, you could profit enormously over the next few years. I explain this opportunity in full detail in my presentation. Watch it for free right here.