The second half of the year looks like it is ready to get off to a slam-bang start.

As I pen this, capital controls have been imposed in Greece after the government’s decision to put the latest conditions from the European Union to unlock the next dollop of bailout money up to a referendum on July 5th.

This triggered a need to prevent cash from leaving the country, and daily ATM withdrawal limits have been implemented.

Banks are closed for at least a week and the country’s stock market will be closed at least through Tuesday.

Not even another rate cut could ease selling pressure as the major index shed more than three percent overnight and are now down more than 20% since the decline began a few weeks ago.

Over $1.4T in market value has been lost over that time period, more than the annual GDP output of Mexico.

As the market has more than doubled over the last year, margin debt has grown more than 120% to some $370 billion. Margin calls are accelerating the decline. Valuations are still monstrous even after the pullback and some of the Chinese indices remind me of the Internet boom and bust here 15 years ago.

This is the bad news which shuddered the Dow to its lowest single-day drop in recent history this past Monday. I’m convinced that this is not the first summer swoon that the markets will experience, as Greece is only the tip of the iceberg. Many other problems are still lurking under the surface.

But, as patient investors know, market sell-offs are the best times to pick up high-quality companies at a nice discount. That is why I am recommending purchasing these two stocks, which are two of the top small cap stocks for growth prospects, on any further dips.

If that was not enough bad news for one day, Puerto Rico has decided the country’s over $70 billion in public debt is “not payable” as the commonwealth is in a “death spiral”. The island is about to seek major concessions from its creditors. To put this in perspective, the island’s debt obligations are roughly four times the size of Detroit’s before it was forced to file for bankruptcy.

Ordinarily this would be front page news, but events in Greece and China are the main focus of investor’s angst right now. However, this event does have the potential to roil the municipal bond market which cities and states rely on to pay for their most basic needs, like road construction and public hospitals.

The good news for intrepid and patient investors who have managed to squirrel away a good chunk of “dry powder” as the market has churned in a very tight trading range for most of 2015 is that lower entry points have a high probability of presenting themselves sometime in July.

This means it is time to get out our “shopping lists” for that eventuality. One area of the market I still find attractive is the small and mid-cap growth area. These are relatively unfollowed equities in companies that are seeing significant revenue and earnings growth.

They also offer a bonus of not being impacted by currency fluctuations for the most part. This will be a headwind for larger American multi-nationals as the US dollar is very likely to strengthen further against the Euro as Europe goes through its latest version of the ongoing Greek tragedy. 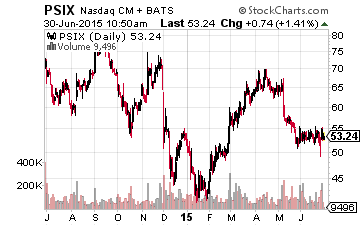 I would not mind picking up some Power Solutions International, Inc. (NASDAQ: PSIX) a bit lower here.

The stock has already declined some $25.00 a share to roughly $55.00 on concerns about lower demand from the oil and gas sector, just one of the many sectors of the economy the company serves.

The company provides powertrain solutions to original equipment manufacturers in the industrial, construction, agricultural, and on-road markets and offers a complete line of fuel-flexible, low-emission engines. It is a growing player in the natural gas engine movement. Roth Capital recently reiterated its Buy rating and whopping $90.00 a share price target on Power Solutions.

Where most of the manufacturing industries are scrounging for solid growth, Power Solutions is seeing robust sales increases. Revenues should be up north of 40% year-over-year and consensus has sales moving up 25% next year as well.

There is nothing wrong with the firm’s earnings trajectory either. The company posted earnings of under $1.50 a share in FY2014 but is in line to make $2.00 to $2.50 a share this fiscal year and projections have Power Solutions delivering more than $3.00 a share in profits in FY2016.

The stock sells at under 17 times next year’s earnings consensus, roughly in line with the overall market multiple despite Power Solutions’ clearly superior growth prospects. Again, I would love to pick this one up about five percent lower in any market sell-off. 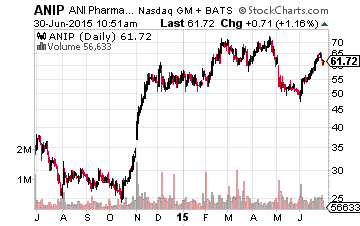 ANI Pharmaceuticals (NASDAQ: ANIP) is another name I would add to my current stake if it dropped another five percent to around $60.00 a share or below.

This under the radar Minnesota-based manufacturer of branded and generic prescription pharmaceuticals has a very similar growth profile to Power Solutions although they are in completely different industries.

The company is focused on pain (narcotics), anti-cancer (oncolytics), women’s health (hormones and steroids), and complex formulations including extended release and combination products.

Thanks to organic growth and a string of small strategic acquisitions, revenues should be up nearly 60% year-over-year in FY2015. Growth should slow in FY2016 but still be up a robust 35% to 40%. After posting earnings of $1.14 a share last year, profits should climb to over $2.50 a share this year and the consensus has ANI Pharmaceuticals earning nearly $4.00 a share in FY2016. ANI trades in line with the overall market multiple based on next year’s projected earning but is seeing much higher revenue and earnings growth.