Owning equity in wonderful businesses is truly one of life’s great gifts.

And the type of wonderful businesses I like best are those that share their growing profit with shareholders. Shareholders are, after all, the owners of any publicly traded company. So it’s a shareholder’s right to collect a portion of the profit.

And when a great business routinely grows its profit, so should the dividend checks to the owners.

[ad#Google Adsense 336×280-IA]That’s why I own dozens upon dozens of high-quality dividend growth stocks, as you can see in my personal portfolio that I share with the world.

I’ve amassed this portfolio that’s well into the six-figures – it should spit out more than $7,000 in dividend income this year – by averaging my way into the market, month in and out for about five years now… all on a modest, middle-class income.

But what I’ve also done, besides focusing on wonderful businesses that share the wealth with the owners, is scout for dividend growth stocks priced less than what they’re actually worth.

Price and value aren’t one and the same.

And although some would have you believe that the stock market is some kind of casino where prices are rigged or stocks go up or down for seemingly no reason at all, that isn’t actually the case.

There is a reason for all of it.

And that reason is value.

Sure, stocks fluctuate – sometimes heavily – in the short term. And sometimes price can be misaligned in relation to value for a long period of time. But value eventually matters and a stock’s price will more or less follow a company’s earnings power over the long haul.

But because the stock market isn’t always very good at recognizing value, allowing feelings of mania or depression to sometimes overwhelm logic, it pays to focus on value.

How do you do that?

Well, you first have to know how to value stocks in the first place. I’d recommend checking out Dave Van Knapp’s highly informative article on valuation if it’s not something you’ve read before.

And then you have to stick to your guns. If a stock is expensive, avoid it. But if a stock is priced less than it’s worth and high quality, it might be time to pull the trigger.

What I like to do is first check out David Fish’s Dividend Champions, Contenders, and Challengers list for potential candidates to add to my portfolio.

Mr. Fish’s list contains invaluable information on more than 700 US-listed stocks that have all increased their dividends for at least the last five consecutive years, which means you’re looking at the type of dividend growth stocks that share profit with the owners, as described above.

But with more than 700 stocks to look at, where do you start?

I’m here to get you started in the right direction, by sharing one stock on that list that appears undervalued right now.

International Business Machines Corp. (IBM) is an information technology company, engaged in creating value and solving problems for clients. They operate in over 170 countries.

Tech might not be the first place you look when trying to find stocks with lengthy track records of increasing dividends.

And that’s because tech changes so quickly. Firms become obsolete over time. Even once-powerful tech companies can wither away over time.

But if there’s any company that’s proven its ability to adapt to the changing forces in tech, it’s IBM. Founded in 1910, they’ve adapted time and time and time again, most recently shifting from low-margin hardware to higher-margin software and services.

Of course, such a shift for a massive company (their market cap is north of $160 billion) takes time, and the stock market isn’t exactly known for its patience.

But that’s exactly why we might have an opportunity on our hands.

So, again, tech isn’t the first sector one considers for high-quality dividend growth stocks. However, IBM has increased its dividend for the past 20 consecutive years.

In the world of tech, that’s a lifetime.

Even better, it’s not just small raises to keep the streak alive.

That’s right. The company has increased its dividend at an annual rate of almost 20% over the last decade. Incredible.

And with a payout ratio of just 33%, there’s plenty of room for future dividend raises.

What’s perhaps most amazing of all is that the stock actually yields a very healthy and attractive 3.12% right now.

It’s just not that often you find a stock yielding north of 3% that’s also growing its dividend well into the double digits. IBM gives you both income and growth of that income, which is wonderful.

With dividend growth like we see above, you’d expect that underlying operational growth is also pretty impressive.

You’d be right about that.

Not much top-line growth there, but that’s largely due to the aforementioned shift in business strategy. Rather than pursuing absolute revenue growth (which would be difficult when coming off of a base of almost $100 billion per year), they’ve targeted growth businesses with higher margins, like cloud, security, and analytics.

That transition plays out across the bottom line. Earnings per share increased from $4.87 to $11.90 over this ten-year period, which is a CAGR of 10.40%. This growth should be qualified with the fact that IBM took a charge of $3.69 for discontinued operations relating to the divestiture of their Microelectronics business. Factoring that out, EPS would have grown at a compound annual rate of over 13% over this period.

We now see where the dividend growth has come from. That strong bottom-line performance, especially in comparison to tepid revenue growth, was assisted in large part by the increasing margins from the business shift. But it was also propelled by significant share buyback activity – IBM reduced its outstanding share count by approximately 38% over the last decade, buying back more than 600 million shares.

S&P Capital IQ is predicting that EPS will compound at a 2% annual rate over the next three years, believing that the company will continue to face difficulties with the transitions in its offerings. However, IBM continues to post strong results and that would be a major departure from its historical record.

One area that tends to trip up investors and may even add to the stock’s low valuation is the balance sheet. A long-term debt/equity ratio of 2.96 is, on its face, extremely high. However, this is due to low common equity rather than high absolute debt. The interest coverage ratio is over 42, indicating that IBM has no issues covering its debt load or interest expenses.

Profitability is robust on its own, but has been rapidly improving due to the aforementioned business shifts. Over the last five years, IBM has averaged net margin of 15.81% and return on equity of 78.70%. The ROE has to be considered in context with the leverage, but the margin is impressive and improving. For comparison’s sake, net margin was under 9% a decade ago.

So there’s a lot to like here. You get a yield over 3% and long-term dividend growth near 20%. That’s almost unheard of.

And as the company continues to shift its offerings and grow out its software-as-a-service businesses, the revenue should grow again, which will help propel EPS growth beyond what the margin improvement and buybacks are already doing. And I think it helps to think that if compound annual growth in EPS well over 10% is possible for IBM with no revenue growth, imagine what’s possible when some of their initiatives start to really take off.

Moreover, being a shareholder in IBM means you’ve got Warren Buffett on your side – Berkshire Hathaway Inc. (BRK.B) is the largest single shareholder of IBM, and it’s well known that Buffett is behind that.

The quality is there. But is the price right? Is it cheap?

The stock’s P/E ratio is 13.94 right now, which is actually artificially high because of the charge the company took in FY 2014. IBM is guiding for operating EPS of $15.75 to $16.50 in FY 2016, which would be a large jump. Nonetheless, the current TTM P/E ratio compares very favorably to the broader market, and it’s also in line with IBM’s five-year average, even with the charge.

We might have a deal on our hands. But what should we pay for IBM here? What’s the stock actually worth?

I valued shares using a dividend discount model analysis with a 10% discount rate and an 8% long-term dividend growth rate. That growth rate seems reasonable considering it’s less than half what IBM has produced over the last decade (the dividend was increased by more than 18% in April). Add in still-strong underlying profit growth, margin expansion, and a modest payout ratio, and the firm appears capable of delivering that and more. The DDM analysis gives me a fair value of $280.80.

I could be way off here, but IBM appears to be substantially undervalued to me. Let’s get some clarity here and see what some of the professionals in the industry value IBM at.

It’s perhaps odd that the latter firm rates IBM as a hold even though they think the stock is extremely cheap. Nonetheless, I’m not alone in thinking that IBM is undervalued, though my valuation is the most enthusiastic. But averaging out the three numbers gives us $223.13, which isn’t far off from S&P Capital IQ’s number. That would infer that this stock is potentially 34% undervalued. 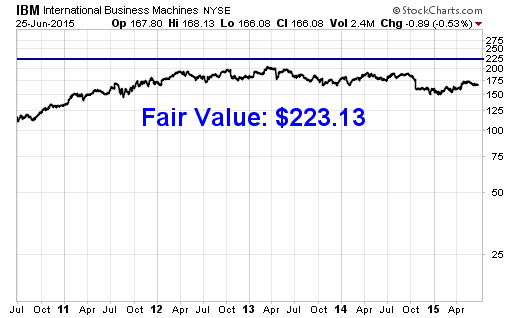 Bottom line: International Business Machines Corp. (IBM) is a rare company in tech, showing an ability to change and adapt for more than 100 years. And over the last two decades, they’ve handed out generous and increasing dividends. The market’s not in love with IBM right now, but Warren Buffett apparently is. And we can probably see why with a yield far above its historical norm and a valuation that indicates the stock has the potential for 34% upside. I’d strongly consider IBM if you have room in your portfolio for a high-quality tech company.