Qualcomm (NASDAQ: QCOM), the giant chipmaker that is basically to the smartphone industry what Intel (NASDAQ: INTC) is to the personal computer and server business. This company has been under pressure of late for several reasons and is the latest of the tech recommendations in my Blue Chip Gems newsletter. This research is from a recent issue of that letter. 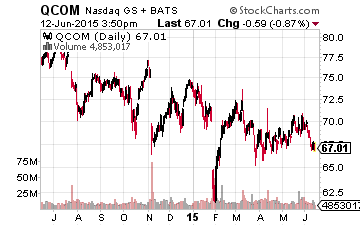 The stock has seen significant headwinds recently as have most chipmakers.

The stock is down some $10 a share over past twelve months to just under $70.00 but has been a solid performer over the past half-decade.

The company seems to have been left out from the build of the new Galaxy 6 smartphone and has some issues with Chinese regulators in 2015.

The company is returning a great deal of free cash flow to investors in the form of dividends and increased buybacks.

The company also has a great balance sheet.

Finally, a well-known activist fund has taken a big stake in Qualcomm and has already indicated it plans to push hard for significant changes at the chip giant that it believes will unlock substantial shareholder value in coming years.

Let’s take a look at the investment case for Qualcomm.

The second core part of Qualcomm’s business makes use of the company’s huge store of patents thanks to its hugely successful research and development (R&D) efforts over the years. This segment grants licenses or rights to use portions of its intellectual property portfolio, which includes patent rights useful in the manufacture and sale of various wireless products, such as products implementing CDMA2000, WCDMA, CDMA TDD, GSM/GPRS/EDGE, and/or OFDMA standards, as well as their derivatives.

Approximately two-thirds of the company’s revenues come from this licensing and royalty business which requires much less capital expenditures than the manufacturing side of the business.

The stock has been dogged because of problems with Chinese regulators, slower revenue growth, and its new chipset called “Snapdragon” not being a part of the new Samsung Galaxy 6. The company recently settled the antitrust investigation by agreeing to pay $1 billion in fines and modifying its royalty rates on handsets sold in the country.

Unfortunately, this sort of “shakedown” is part of doing business in the Middle Kingdom for technology firms. The settlement puts the matter behind Qualcomm and hopefully will lead to more accurate license royalties by Chinese firms that use Qualcomm’s products and patents.

Revenue growth has slowed into the low single digits year-over-year recently, but the company has longer term opportunities that should boost sales back into the high single digits in the near future. I view the Snapdragon loss due to Samsung wanting to use a chip it manufacturers internally that is unlikely to affect other smartphone makers’ decision to include Snapdragon in the future.

While growth in its core smartphone market has slowed recently, the market is far from saturated. Thanks to emerging markets, the smartphone market should still see solid unit growth for years to come. In addition, the world is becoming more and more “interconnected”. Qualcomm’s expertise in LTE and other mobile technologies should play well as homes and autos connect directly to the internet and become “smart”.

The company believes these new areas of growth will be key drivers to its goals to deliver average annual revenue growth of 8% to 10% over the next five years. It believes combined with stock buybacks and other operational improvements this will lead to annual earnings per share growth in the low teens over that same time span.

Qualcomm has a market capitalization of approximately $115 billion. The company has a fortress balance sheet with over $15 billion in net cash. The stock goes for less than 15 times trailing earnings in a market that currently goes 18.5 times trailing earnings. The shares go for less than 13 times next year’s earnings and looks even better from a valuation basis when one equates for the net cash the company has on its books and considers its substantial dividend yield.

Recently Jana Partners has taken a better than $2 billion stake in Qualcomm. Jana is one of the oldest and most successful of the large hedge funds in the activist space. This represents a good portion of Jana’s current investment portfolio. Already Jana is calling on Qualcomm to cut costs, accelerate stock buybacks, and make changes to its executive-pay structure in an effort to improve shareholder returns.

Jana could also call on the tech giant to break itself into two separate business lines along the current core dual parts of the company. Both of the separate firms could command greater multiples in the market as pure-play entities.

Qualcomm itself proposed this idea 15 years ago but later called it off. An announcement to split the company into these two separate entities could quickly add 20% to 25% in market capitalization as the move would be very well received in the market. Another possibility would be for Qualcomm to sell its chip business to a larger entity like Intel which could also unlock significant value.

The company was already stepping up its largesse to its shareholders before Jana took a stake. Qualcomm announced $15 billion stock buyback announced last month, with $10 billion set to be repurchased in the next 12 months.

The company also raised its dividend payout 14% recently and the stock now yields over three percent, an appealing trait for income investors in this low-interest rate environment. Qualcomm has been returning more and more of its free cash flow to shareholders in recent years and gave back over $7 billion to stockholders in dividends and stock buybacks last year.

Qualcomm is the classic Blue Chip Gem stock that has temporarily hit some rough waters over the past year. The shares are cheap, the stock pays a substantial dividend, Qualcomm should boost growth in the years ahead, and has a big activist fund pushing it to create additional shareholder value.

The shares deserve at least a conservative multiple of 15-16 times the $5.50 a share the company is projected to make in 2016 which gives me a price range of $81.00 to $87.00 a share on QCOM. Add in a three percent plus yield plus the possibility of the company splitting into two companies and the stock should easily outperform the market over the next 12-18 months and should be the kind of consistent deliverer of shareholder value that the Blue Chip Gems portfolio stocks seeks out