I’ve added it as I believe it is a good part of the market to increase allocation slightly to at the moment.

In addition, interest rates should start to head up at least a little higher in 2015 as the Federal Reserve has ended its quantitative easing programs and we should see our first rate hike from the institution since 2006 sometime this year.

This would be good for banks’ net interest margins and for returns on insurers’ investment portfolios.

Auto sales and related financing remains strong and the housing market heads into the spring selling season and we should see increased activity in this space this year. Most importantly the financial sector sports reasonable valuations in a market that is feeling more and more “overbought”. While the overall market is trading at approximately 18.5 times trailing earnings, many strong financial companies have stocks that are trading at 10 to 12 times earnings.

There are reasons for this discount. New regulations and increased regulatory focus and fines have increased compliance costs and led to reluctance to lend at levels we would ordinarily see at this point in a recovery or business cycle. In addition, this has been by far the weakest post war recovery of the ten cycles since 1945 as far as GDP growth.

However, it does appear the economy is slowing strengthening and regulatory action should have hit a peak and start to ebb some bolstering sentiment on the sector. We want to benefit from these trends at Blue Chip Gems and are adding Capital One (NYSE: COF) to our wallet or portfolio.

Citi recently called Capital One its top pick among the credit card firms citing the company’s “strong card loan growth, capital return, and reasonable valuation”. It is an outlook I concur with at the moment. Let’s take a look at the investment case for Capital One and why it belongs in the Blue Chip Gems portfolio right at $80.00 a share.

When most people think of Capital One, they see a pure play credit card insurer thanks significantly to the company’s well received and iconic “What’s In Your Wallet?” campaigns. However, the company is much more than that. Thanks to some key banking acquisitions including ING Direct in February 2012, the company has transformed itself into a top 10 bank based on deposits.

This significantly lowered its cost of funds base. A decade ago low cost deposits made up only 30% of Capital One’s funding base and the rest was provided by more volatile wholesale funding system which can tend to dry up or get very costly in times of crisis or turbulence. Today over 80% of the company’s funding needs are provided by its deposit base. 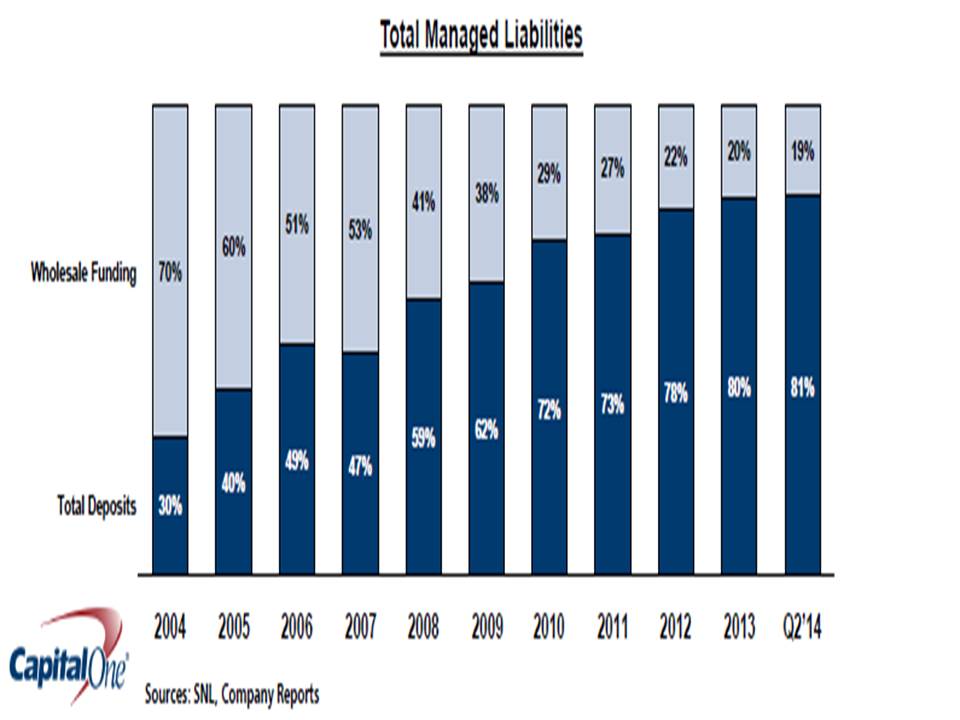 Capital One offers a broad spectrum of financial products and services to consumers, small businesses, and commercial clients. The company has just over $200 billion in outstanding loans on the books as the close of business at yearend 2014. Approximately 37% of these were credit card receivables, 24% were commercial loans (approximately 50% for real estate), 18% auto loans, and 14% home loans.

Capital One has been able to diversify its business lines and mitigate risk to any one segment of the economy over the past few years. It even has an online brokerage business. In addition, its exposure outside the United States is minute, thus removing any impact from a strong U.S. dollar that has been crimping the earnings of many firms within the S&P 500 with overseas reach over the past couple of quarters.

Capital One is prudently growing its outstanding loan balance as the economy continues to slowly improve. In the fourth quarter, commercial loans grew 13% year-over-year and credit card loans increased six percent over the same time period as a year ago.

The bank recently passed the latest round of annual “stress tests” that have been a hallmark of the post crisis banking regulatory regime. The minimum Tier 1 common capital ratio for banks is 5%, according to the Federal Reserve. Capital One had a Tier 1 capital ratio of 9.5% up from 7.8% last year under the central bank’s severely adverse scenario this year.

More importantly for the bank, it received permission to increase its dividend payout by a third to 40 cents a share a quarter. This will boost Capital One’s dividend yield to two percent. Given the payout ratio based on next year’s earnings is just 20% this dividend payout could be frequently and significantly boosted higher in coming years as the clamps start to come off the banking sector over the medium term as balance sheets continue to be in much better positions since the financial crisis.

In addition, the company recently boosted its stock buyback authorization to just over $3 billion which is just under 8% of its outstanding float. The company bought back five million shares or roughly $400 million worth of shares.

The shares are cheap priced right at book value. The stock sells for less than 11 times trailing earnings in an overall market that goes for over 18 times trailing earnings at the moment. The company is always seeing solid revenue growth in a market seeing little organic sales gains at the present time. Revenues should increase in a five to six percent annual range over the next few years according to the current consensus and recent historical comparisons. Earnings should be flat to slightly up this year in the $7.50 to $7.75 a share range.

Next year should see an improvement to $8.00 to $8.50 a share according to most analysts I have seen. Profits should come in on the high end of that range if the economy produces closer to three percent GDP growth in 2015 and 2016; this is the current economic consensus rather than the two percent annual GDP growth the economy has seen throughout the recovery from the financial crisis. If interest rates do start to rise then sentiment, profits and multiples on the financial sector should all be boosted.

Capital One is not going to set anyone’s portfolio on fire over the next year. However, the shares are undervalued at current levels from a longer term perspective. Given the company’s diverse business lines, projected better environment for financials over the next twelve months and low valuations the market multiple could easily improve to a conservative 12 times forward earnings.

At the low end of FY2016’s projected profits of $8.00 a share that gets us to a $96.00 a share price target on Capital One. Add in a small but growing dividend yield and Capital One could easily return 20% over the next year. Given I think the overall market will be lucky to produce an overall return of mid to high single digits over that same time period and the company’s position within the sectors it competes, Capital One is a compelling and low beta investment at current levels.