Warren Buffett is thought to be the greatest investor of the 20th century, turning a fledgling textile mill into one of the world’s premier companies with businesses ranging from selling candy to operating one of North America’s largest railroads.

As such, it might not be a bad idea to be on the same side of an investment as Buffett.

But what about not just being on the same side, but also being able to invest in the single largest holding in the common stock portfolio of his company?

A stock he just so happens to continue buying?

This is one of the four largest banks in the US, with diversified financial offerings across retail, commercial, and corporate banking services.

So what does Warren Buffett (and many others) see in a bank with corporate history dating back to 1852?

How about over $1 trillion in core deposits?

That’s right. Wells Fargo has access to over $1 trillion in low-cost capital, which allows them to seek attractive and relatively profitable returns without taking on a lot of risk.

In addition, banking is something that’s necessary and ubiquitous. Over 70 million customers rely on Wells Fargo for their banking and financial needs. That alone makes this investment fairly sensible for a long-term investor.

Their position in the US mortgage industry bodes well for continued housing demand and the potential for increasing sales moving forward.

It’s been said that the best customer to sell a new product to is an already existing customer, and Wells Fargo seems to understand this through a well-developed and robust cross-selling strategy with all three of their operating segments reporting ratios well over 6 products per banking household or relationship.

This strategy allows them to maximize profit per customer all while maintaining an extremely low-cost and large base of capital from which to leverage attractive rates of return with low risk.

And this is what we see in their revenue mix: 52% of FY 2014 net income was net interest income while the other 48% was noninterest income related to fees charged across their product and service portfolio.

So let’s take a look at WFC’s last 10 years of financial performance, which also happens to include the financial crisis. This will gives us a pretty good glimpse into the quality of the bank via its growth profile, which will also help in valuing the company.

Highly impressive, although part of that growth was fueled by the acquisition of Wachovia Corp., which was completed in 2009. That acquisition also resulted in the issuance of a significant number of common shares.

But earnings per share grew from $2.25 to $4.10 over this period, which is a still-impressive CAGR of 6.89%. I say impressive because this time frame included one of the worst possible periods for the bank when the financial crisis brought down a number of major financial institutions.

Growing at a ~7% per-share annual clip before, through, and after that is no small feat, especially when also considering they issued shares to fund a major acquisition.

S&P Capital IQ predicts that EPS will grow at a compound annual rate of 5% over the next three years, citing the headwind of an environment with continued low interest rates. However, rising rates could be a substantial tailwind.

WFC did cut its dividend during the crisis, which is something that, as a hardcore dividend growth investor, I don’t like to see.

But, again, that period was unprecedented in terms of volatility and uncertainty.

Meanwhile, WFC has been righting past wrongs there, increasing its dividend for the last five consecutive years. And they appear to be committed to further dividend growth by their recent actions and announcements.

This five-year track record, by the way, qualifies them to be listed on David Fish’s Dividend Champions, Contenders, and Challengers document. They’re just a “Challenger” now, but they could very well one day move their way back up into “Champion” status if they continue to increase their dividend.

And over that five-year period, the dividend has grown at an annual rate of 22.5%, which nothing short of spectacular.

The payout ratio remains a very healthy and comfortable 36.7%, which offers plenty of room for future dividend raises.

Now, all of that might be for not if the yield wasn’t attractive, but it is.

WFC yields 2.68% here, which is solid in absolute and relative terms.

That’s well above the broader market and WFC’s own five-year average.

In addition, I’m a lot like Buffett in that I don’t like to buy businesses that are extremely leveraged or have histories of poor use of credit.

The bank’s balance sheet is far superior to its peers, with a long-term debt/equity ratio of 1.0 and an interest coverage ratio of 9.4.

Profitability also ranks near the top of the industry. WFC has averaged net interest margin of 3.69%, return on assets of 1.31%, and return on equity of 12.95% over the last five years.

So I think we can see why Buffett is such a fan of this business. It’s a business model that’s necessary and ubiquitous, and WFC does it better than pretty much everyone else.

I’m also a fan – it’s a large holding in my personal portfolio.

They continue to increase their deposit base at a very attractive rate, generally well above that of their peers. And their cost of capital lies at or near the bottom of the industry. Last fiscal year, their average cost of deposits was just 9 basis points.

In addition, they continue to maintain high lending standards with extremely low (as a percentage) net charge-offs and nonperforming loans.

However, there are risks to consider. Regulation, legal risks, and scrutiny remain omnipresent, and any changes in the industry, including capital ratios, could harm WFC’s ability to profit. In addition, there are larger changes at play away from expensive branches. Low rates could persist, which could remain a headwind for the bank.

I valued shares using a dividend discount model analysis with a 10% discount rate and a 7% long-term dividend growth rate. That growth rate seems more than fair as it’s in line with WFC’s growth of EPS during a particularly tumultuous period, which would seem to model in a margin of safety. In addition, a low payout ratio gives plenty of room for future dividend raises. The DDM analysis gives me a fair value of $53.50. This stock appears more or less fairly valued right now. 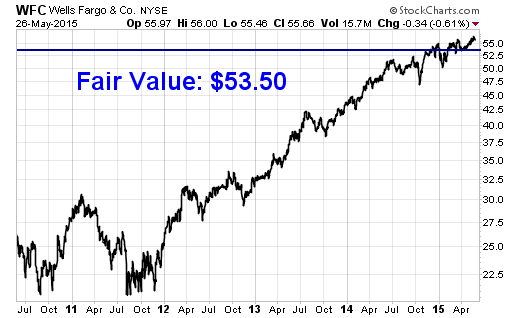 Bottom line: Wells Fargo & Co. (WFC) is one of the highest-quality banks in the entire world. Their dominant position in US banking is unlikely to cede anytime soon with extremely strong market share across the lending space, over 70 million customers, over $1 trillion in deposits, and a robust cross-selling strategy. I think we can all see why Buffett continues to love this stock. It appears fairly valued right now, which is an opportunity that should be considered right now.