Imagine what kind of business model you’d have to have to be able to not only pay a dividend to shareholders, but raise that dividend for 60 consecutive years.

Just think about that for a second.

Massive inflation during the late 70s and early 80s.

All of those events have occurred over the last 60 years, yet the company I’m about to discuss kept right on growing its dividend throughout it all.

They are in the business of the most precious natural resource on the entire planet.

We literally cannot sustain life without water, which is why American States Water Co. (AWR) is such an interesting long-term investment opportunity.

This company operates through two subsidiaries: a regulated water utility in Golden State Water Co. and a contracted services business through American States Utility Services, Inc. The former accounted for approximately 78% of fiscal year 2014 revenue, while the latter provided the remaining 22%.

The regulated utility side of the house provides water services to 258,000 customers throughout California.

The contracted services business operates and maintains water and wastewater systems at various military bases under 50-year contracts with the US government.

Now, a water utility might be thought of as a boring business and you’d be right about that. But is boring bad? I think boring is wonderful. Besides, there’s nothing boring about making money.

And this company is in a good position to continue making money for many, many years well into the future because the services they provide are absolutely necessary in order for life in their service area to function normally. Their customers literally cannot do without AWR’s services.

That’s right. Life as we know it would cease to exist without a constant supply of fresh, clean drinking water. And wastewater is arguably just as important to manage.

As such, AWR is in a wonderful position to profit from that through their infrastructure, contracts, and expertise.

However, as with all other utilities, AWR’s business is heavily regulated. As such, their growth is somewhat constrained.

So let’s take a look at what that dynamic looks like by looking at the last ten years’ growth before moving on to some of their other fundamentals.

We’ll find out exactly what kind of quality we’re working with here and later be able to reasonably estimate the business’s worth.

Pretty solid results here for a utility, especially one operating in a pretty concentrated geographical area (on the regulated utility side of the house).

But what’s even more amazing is their dividend record.

I explained earlier that they’ve been increasing their dividend for the last six consecutive decades, which puts them in the kind of territory that is currently unrivaled.

They’re featured as a “Champion” on David Fish’s Dividend Champions, Contenders, and Challengers list. In fact they’re the only company on that list (out of more than 700) with a track record of 60 consecutive years of dividend growth.

However, it’s not just their track record in terms of how long they’ve been growing their dividend that’s impressive. They’re also growing the dividend at an attractive rate year after year.

Over the last decade, the dividend has increased at an annual rate of 6.5%.

That rate is lower than what profit has been growing at, leading to a fairly conservative payout ratio of just 52.3%.

Meanwhile, the yield right now, at 2.21%, is well above the broader market.

So you’re looking at fairly attractive total return prospects here with a yield of 2.21% and a long-term dividend growth rate of 6.5%. I find that total returns should roughly mirror the sum of yield and dividend growth, assuming a static valuation. As such, a 9% anticipated return on a pretty conservative investment is pretty appealing.

AWR’s balance sheet is pretty attractive considering the business model and industry. Utilities are capital-intensive businesses with expensive infrastructure to build and maintain, so it’s not uncommon to see leveraged entities in this space.

However, AWR’s long-term debt/equity ratio of 0.64 and interest coverage ratio of 5.58 both indicate that AWR has no issues with debt or interest expenses.

I think you have to like what you see here. The business model is absolutely necessary insofar as they provide crucial services to clients that require their services. And that’s never going to change. Water is as ubiquitous as it gets and AWR’s position in delivering that valuable commodity will likely remain unchanged for the foreseeable future.

That necessity and ubiquity has largely helped translate into 60 consecutive years of dividend raises, which is currently unparalleled.

However, there are some risks to be considered here.

First, you have to consider that the large portion of AWR’s business is regulated. As such, they lack the ability to control their own destiny, as any rate increases have to be approved.

In addition, their infrastructure, while valuable, is expensive to maintain. Various reports suggest that our nation’s water infrastructure is in poor condition.

Over the last two years, AWR has spent $302 million across its two subsidiaries upgrading its infrastructure. That’s a lot of money for a company that only took in $466 million in revenue last fiscal year.

Is it the right price right now?

The stock trades hands for a P/E ratio of 24.09, which is well in excess of both AWR’s industry and the broader market in general.

So it appears there’s a pretty hefty premium on this stock right now.

I valued shares using a dividend discount model analysis with a 10% discount rate and a long-term dividend growth rate of 6.5%. I usually like to model out a growth rate lower than what a company has historically delivered in terms of dividend growth, but AWR currently sports a very modest payout ratio and profit per share has been growing faster than 6.5% over the last decade.

As such, I think this anticipated dividend growth rate is reasonable over the long haul. However, this still only gives me a fair value of $25.93, which is 33% lower than the stock’s current price. 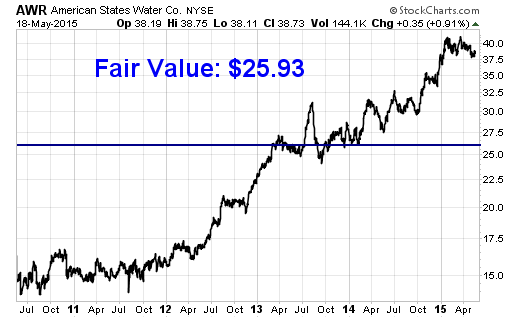 Bottom line: American States Water Co. (AWR) is in the business of providing the world’s most valuable commodity as a service. The absolute necessity of reliable and clean water has helped fuel growth for the company which has translated into 60 consecutive years of dividend raises for shareholders. However, even the best businesses in the world aren’t worth paying too much for. And this stock appears to be simply overvalued right now. I’d wait for a pullback of at least 25% before considering this high-quality stock.