I first visited Shanghai about 20 years ago. I almost laughed out loud when a Chinese official in a small, musty office told me his plans to develop a massive new financial district in sleepy Pudong, located just across the water.

This official worked for the Shanghai Lujiazui Finance and Trade Zone Development Company.

As I listened to him talk, I knew his proposal wasn’t possible – for anyone.

He was planning what seemed to be the greatest construction project in the history of mankind.

How could a bunch of inexperienced bureaucrats make that happen… and in such a short time frame?

I could hardly hold in my laughter as he explained this preposterous plan with a straight face… But China had the last laugh.

The Chinese official in the musty office was right. His plan for Shanghai came true – and then some.

Words can’t even describe the transformation. Fortunately, I found an excellent “before and after” picture online of what this guy was talking about. It is unbelievable… but it really happened.

As you look at the picture below, use the “Big Ben”-style clock (circled) as your frame of reference. It doesn’t change from past to present. (You can view the original photographs here.) 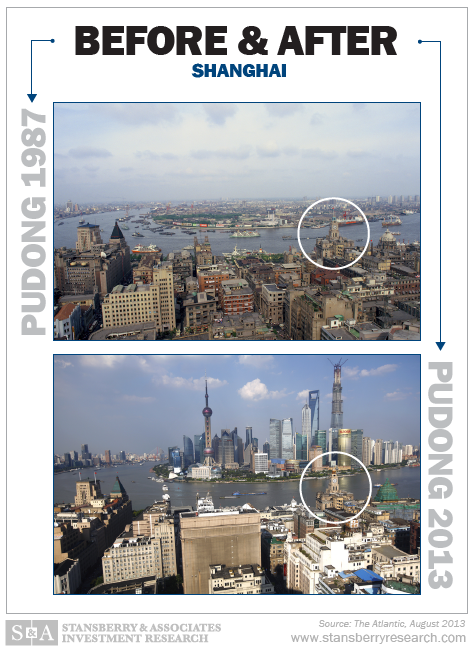 China’s growth has been crazy. And I wouldn’t rule out that its economy could overtake – even double – the U.S. economy by 2050.

And in all my years in the markets, I have learned one thing about China…

I think the truth lies somewhere in between, leaving us room to make real money. Here’s how:

If you’re simply bold enough to buy when people think China will never amount to anything and sell when people believe China is about to take over the world, you can make a lot of money in Chinese stocks.

From 2005 to 2007, for example, investors fell in love with China. Stocks soared by hundreds of percent. Then, during the 2008 financial crisis, nobody wanted anything to do with China. Stocks lost two-thirds of their value. But they recovered again in 2009 with a triple-digit gain.

Over the last few months, investors have fallen back in love with China. And that gives us an incredible opportunity. I believe now is the time to put money to work in China.

That’s the biggest theme, right now, in my True Wealth newsletter. And I suggest you make China a large holding in your portfolio as well.

Sponsored Link:  I recently put together a presentation that details why now is the right time to put money to work in China. It all has to do with a coming announcement that will be an incredible benefit to Chinese investments. And it’s something you need to understand today to both protect your wealth… and profit in the years ahead. You can learn all of the details on this opportunity – for free – right here.