Products that are available in over 200 countries and territories around the world.

History dating back more than 100 years.

These are just some quick facts about the world’s largest snack food company, and one of the largest beverage manufacturers on the planet.

What does this mean to you?

Well, that is if you’re interested in building growing passive cash flow and increasing your wealth.

Because that’s exactly what the company in question does for its shareholders over long periods of time.

What company is this?

I just mentioned growing passive cash flow, and PEP does not disappoint in this regard.

In fact, they just recently announced a 7.3% increase in the amount of their quarterly dividend.

Not too shabby, right?

Well, that’s a lot more impressive when you consider that’s the 43rd consecutive year in which the company has increased their dividend. Now we’re talking!

Those brands have propelled this global company into a $142 billion behemoth (based on market cap).

So let’s take a look at what kind of growth PEP has managed over the last decade, as well as some of their fundamentals. This will help us determine what kind of quality we’re working with here, as well as whether or not the stock is a good deal right now.

Earnings per share is up from $2.39 to $4.27 over this period, which is a CAGR of 6.66%. Solid, but growth has notably slowed in recent years. That’s something to be mindful of.

S&P Capital IQ predicts that EPS will grow at a compound annual rate of 7% over the next three years, citing margin improvement that should offset negative currency effects.

I already discussed PEP’s incredible dividend growth streak, which is one of the longest and strongest in its space. But it’s not just the length of the streak that’s impressive, but the rate at which the dividend has growing.

Over the last decade, for instance, the dividend has increased at an annual clip of 12.5%.

Compare that to inflation over that period and you can see how well shareholders have done in terms of purchasing power.

The only downside to that high dividend growth rate is that it’s exceeded the rate at which underlying profit has grown on a per-share basis over the last decade, leading to a slightly high payout ratio of 65.6%.

That’s not immediately concerning in terms of the sustainability of the dividend, but future growth will likely have to slow to the level at which EPS is growing.

The good news is that shares yield a very attractive 2.91% right now, which is about 100 basis points higher than the broader market.

Looking at PEP’s balance sheet, we can see that it has expanded in recent years as the company has taken advantage of low interest rates. The additional debt has led to a long-term debt/equity ratio of 1.36. That’s a bit high, and certainly higher than what it was just five years ago. But an interest coverage ratio of 10.63 indicates that the company has no problems with paying its interest expenses.

Profitability is a key metric you always want to look at for a company, as it tells you how efficiently management is running the business.

It’s tough to not be invested in one of the most successful beverage and food companies in the world. 22 billion-dollar brands speaks for itself, as does 43 consecutive years of dividend growth. Those are a couple of great reasons why I’m a shareholder in PEP.

I often mention the benefits of investing in products and/or services that are ubiquitous. After all, something doesn’t become ubiquitous out of thin air.

And I think it’s safe to say that most of the products that PepsiCo manufactures and markets are ubiquitous. Visit any grocery store in the country and you’ll find shelves stocked with their products. Visit any home around the world and you’ll very likely find some of their products somewhere in that house.

People drink their beverages and eat their food because they’re desirable and enjoyable products. I see no reason that won’t continue for the foreseeable future.

And since PepsiCo owns some of the best and most well-known brands in those spaces, they should do well.

However, there are risks here. Primarily, there’s the concern of health, as many of PepsiCo’s products contain amounts of sugar and/or salt that, when consumed in large amounts, are unhealthy. There’s also a risk that governments could impose taxes on the the type of snack and beverage products that the company manufactures and markets. Input costs can be volatile. In addition, there are currency risks to be aware of, as PEP operates on a global scale.

PEP trades hands for a P/E ratio of 22.56 right now. That seems a bit strong, especially when considering the five-year average P/E ratio is only 18.1. In addition, PEP’s current P/E ratio is well in excess of the broader market.

I valued shares using a dividend discount model analysis with a 10% discount rate and a 6.5% long-term dividend growth rate. That growth rate is just a bit less than the long-term growth rate for EPS, and it’s also slightly below what EPS is expected to grow at looking forward. The dividend can’t really grow faster than that which underlying profit will support, so this builds in a slight margin of safety, especially since the payout ratio is moderately high. The DDM analysis gives me a fair value of $85.50. 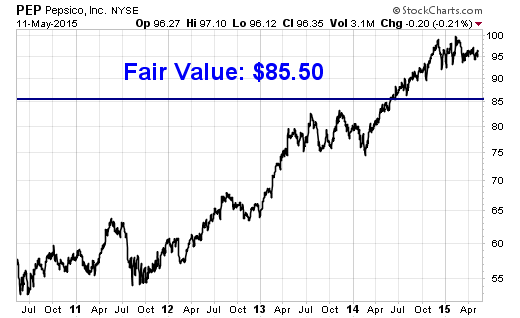 Bottom line: PepsiCo, Inc. (PEP) is a high-quality company with 22 $1 billion brands under their belt. And 43 consecutive years of dividend increases shows that they take their shareholders seriously, as well as the fact that they’ve been able to regularly increase profit for decades on end to support that growing dividend. However, the stock appears expensive right now, likely bid up by yield-hungry shareholders looking for a defensive holding. I don’t think the current valuation warrants enthusiasm, but any large pullback in the price and/or boost in underlying profit could see me pretty excited about this stock once more.