Perhaps the better question is why not?

Why would you want to knowingly pay more than you need to for a stock or, for that matter, anything else you exchange money for?

In this life, almost anything that you can buy has a price tag attached to it.

[ad#Google Adsense 336×280-IA]That price will tell you how many dollars (or euros, yen, or whatever else) you’ll have to give up in order to acquire that item.

However, that doesn’t tell you much of anything at all.

It certainly doesn’t tell you what that item is worth.

I could grab my dining room set right now, carry it outside, and slap a $500 price tag on it in hopes that a passerby would give me that much money for it.

But what is it worth?

Seeing as how I paid less than $500 for the whole set many years ago, it’s doubtful that it’s worth even half that now.

It works the same way with stocks. A stock, after all, is just a tiny piece of ownership in a real business.

As such, you have to actually value that business to know what you should pay. And in that regard, I’d recommend checking out Dave Van Knapp’s piece on how to go about valuing dividend growth stocks.

These are stocks that generate so much profit that they not only have enough to reinvest in the business and continue growing, but they also have a bunch of spare profit around to share with the owners – those owners are shareholders.

These dividend growth stocks are exactly what you’ll find (and only what you’ll find) on David Fish’s Dividend Champions, Contenders, and Challengers list, which documents and tracks more than 700 US-listed stocks that have all increased their respective dividends for at least the last five consecutive years.

So I not only want to buy those kinds of stocks for my personal portfolio, but I want to make sure the price I’m paying is in line with or less than fair value.

As such, you can imagine that I was recently delighted to find a high-quality dividend growth stock that currently appears to be priced below its actual value.

And I’m going to share that stock with you readers today because there could be a profitable opportunity at hand.

ONEOK, Inc. (OKE) is a diversified energy company. It is the sole general partner and 37.8 percent owner of ONEOK Partners L.P. (OKS). OKS is a leader in the gathering, processing, transportation, and storage of natural gas. It also owns and operates a large natural gas liquids system, connecting NGL supply in the Mid-Continent and Rocky Mountain regions with key market centers.

OKE, through OKS, owns a huge network of pipelines and processing plants that connect energy sources with market centers that need that energy. These assets are not only incredibly valuable and integral in terms of moving energy, but they’d be incredibly difficult to replicate by any competitor.

The company owns and manages an extensive 36,000-mile integrated pipeline system that operates on a significant fee-based platform. As such, they’re generally able to weather periods of pricing volatility in energy commodities, which we’ll see below.

That ability to draw from experience and leverage the value of their pipeline system has led to OKE increasing dividends for the past 13 consecutive years.

But it gets better.

Pretty incredible, though keep in mind this is a highly leveraged entity. As of right now, the dividend has a coverage ratio of 1.20 times, based on last quarter’s cash flow from ownership of OKS.

Now, in order to value a business going forward, you have to know where it’s already been. I generally like to use 10 years of financial growth to make a baseline case, but OKE is a vastly different company today than it was just a decade ago.

So we’re going to look at the last five years and attempt to conservatively extrapolate that out going forward, as well as using guidance from the company itself.

We’ll also look at distributions from the MLP, because that’s ultimately what funds OKE’s dividends. MLPs can’t be accurately valued based on earnings per share because of their operating structure, so we’ll look at this distribution growth.

Total distributions declared from OKS to OKE in FY 2010 was $311 million. That grew to $633 million in FY 2014. So that’s a compound annual growth rate of 19.44% over that period. You can see that lines up pretty well with dividend growth.

Now, OKE has suffered during the drop in prices across energy commodities, which causes issues for their gathering and processing business. In addition, reduced prices reduces activity in the energy industry, which can cause a reduction in demand for transportation and storage.

As such, they’ve reduced their guidance this year from a previous 14% dividend growth to 4% to 8% growth. I’m going to be conservative and model out that lower end of guidance for the foreseeable future.

Now, one aspect of MLPs is that they’re frequently highly leveraged due to the capital-intensive nature of the business. OKE is no different: They sport $7.1 billion in the long-term debt at the GP level, while OKS sports more than $6 billion. However, OKE maintains investment-grade ratings on their senior unsecured long-term debt of Baa2/BBB.

I think there’s a lot to like here, but there’s also a lot of risk. The energy industry is undergoing a lot of turmoil and reduced guidance at the GP level means cash flow from OKS remains weak. Nonetheless, this could be an exceptional opportunity for those who see the long-term potential.

As previously noted, MLPs can’t be judged by EPS, so the P/E ratio is more or less useless. Instead, we’ll go straight into valuing the business based on the dividend and dividend growth.

So what’s OKE worth?

I valued shares using a dividend discount model analysis with an 8% discount rate and a long-term dividend growth rate of 4%. That growth rate is extremely conservative seeing as how it’s less than 1/4 that of OKE’s long-term dividend growth rate. Furthermore, it’s even on the low end of current guidance. This conservative model is to compensate for the risk inherent in this investment. The DDM analysis gives me a fair value of $62.92.

This stock appears to be significantly undervalued based on my analysis, but my opinion isn’t the only one around. I’ll compare my result to that of professional analysts that follow and have valued this stock.

Morningstar rates OKE as a 4-star stock, with a fair value estimate of $56.00.

It appears my final result is the highest, which is strange since I tried to be conservative. While we’ve got three different numbers, averaging them out will give us a reasonable consensus. That average is $54.87, which indicates that this stock is quite possibly 25% undervalued right now. 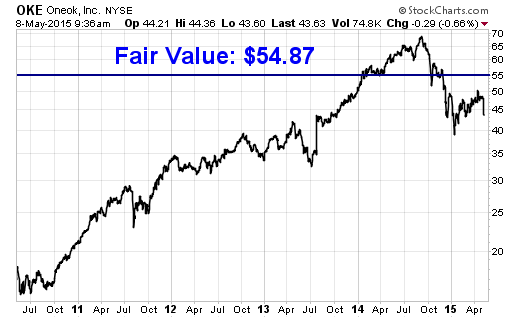 Bottom line: ONEOK, Inc. (OKE) has an outstanding long-term track record for growth at the GP level due to the outstanding assets of the underlying MLP. However, there are risks to consider here including leverage and volatile commodity pricing which affects the demand for OKE’s services.

Nonetheless, that risk appears to be priced in here with shares offering the potential of 25% upside on top of a monster yield of 5.51%. This is a high-risk play that also offers a lot of potential reward. And the stock pays a very attractive yield in the interim. I’d strongly consider OKE here if you have the stomach and time horizon for it.