I often discuss the positive effects of investing in companies that provide ubiquitous products and/or services.

After all, something doesn’t become ubiquitous for no reason.

Ubiquity is bestowed upon those products and/or services that are in demand or in need – people and/or businesses must be demanding something for it to become ubiquitous.

Thus, that means increasing revenue and profit is sure to follow as supply meets that demand.

[ad#Google Adsense 336×280-IA]Now, when I think about ubiquity, there are a few companies that immediately come to mind.

I mean it’s not even close.

This company is known by hundreds of millions of people around the world, with approximately 11,000 stores across 27 countries.

And 250 million customers are served weekly by the company.

Partly because of their ubiquitous nature, they’ve been able to routinely grow their annual profit for decades, which has led to decades upon decades of increasing dividends for shareholders.

What company am I referencing?

They have huge competitive advantages that impart a fairly wide economic moat around the company.

Their competitive advantages can largely be traced back to the massive economies of scale they command, which gives them unique and powerful leverage over suppliers in terms of negotiating prices and providing low-cost merchandise to customers.

In turn, this allows them to be a low-cost provider, which drives traffic to their stores.

While the retail space is extremely competitive, WMT’s advantages have allowed it to become an absolute global juggernaut. Meanwhile, they continue to expand their space in other channels, like e-commerce and smaller format stores.

So let’s see what the company has managed to generate in terms of growth over the last decade. That’ll likely tell us something about where they’re going, which can also help to determine its suitability and attractiveness as an investment today.

S&P Capital IQ anticipates that EPS will compound at an annual rate of 7% over the next three years, in line with their average over the last decade.

Easily qualifying as a “Champion” on David Fish’s Dividend Champions, Contenders, and Challengers list, the company has increased its dividend for the past 42 consecutive years.

Just think how many things you have to do right as a company to drive the kind of increasing profit for decades on end that can fund rising dividend payouts to shareholders.

The actual dividend growth itself is also wonderful, with a 10-year dividend growth rate of 14.8%. Although, recent dividend raises have been much smaller, with the most recent increase coming in at just 2.08%.

That means there’s no reason to expect that the dividend raises will stop anytime soon.

And the stock yields a pretty attractive 2.51% right now, which is approximately 60 basis points higher than the broader market. That’s also above WMT’s five-year average yield.

Looking at the company’s balance sheet, we see some leverage there, but nothing immediately concerning. The long-term debt/equity ratio is 0.51 and the interest coverage ratio is just over 11.

One of the company’s strong suits is its profitability, due in part to their economies of scale. Though not particularly impressive on absolute measures, they’re doing very well relative to their industry (retail is a low-margin industry).

So you just have a lot to like here. 42 consecutive years of dividend growth kind of speaks for itself – that stretches periods of massive inflation, multiple stock market crashes, wars, changing times, and the Great Recession.

I don’t really see a lot on the horizon that can immediately threaten their dominant position. Although the advent of the internet has revolutionized the nature of retail and how people buy goods, WMT has remained relevant and dominant over the last decade (which includes the rise of said e-commerce).

Meanwhile, they’re increasing their exposure to e-commerce dramatically while also adding to smaller format stores which can better compete with pharmacies and dollar stores.

However, one should keep in mind there are inherent risks to investing in WMT.

So WMT stock is trading hands for a P/E ratio of 15.77 is well below that of the broader market, though it is higher than WMT’s five-year average P/E ratio of just 14.3.

I valued shares using a dividend discount model analysis with a 10% discount rate and a 7% long-term dividend growth rate. That seems fair considering it’s somewhat in line with their 10-year EPS growth rate, and the forecast for earnings growth moving forward is in that range as well. Though dividend growth over the last decade is high, recent raises have been rather unimpressive. The DDM analysis gives me a fair value of $69.91. 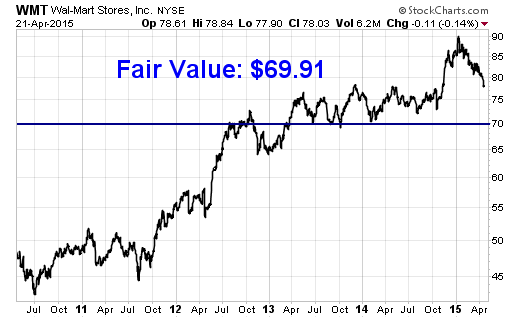 Bottom line: Wal-Mart Stores, Inc. (WMT) is the world’s largest retailer by a long shot. Unrivaled economies of scale allows them to generate some of the highest margins in the industry while still providing low-cost merchandise. However, the industry is brutally competitive and changing all the time. While the company is doing well at changing with the times, I’d still be cautious here with the valuation. The company provides low-cost merchandise, but the stock seems a tad expensive. Waiting for a 10% pullback before going shopping might be in your best interest.