The market continues to “melt up” despite the first projected quarterly year-over-year decline of S&P 500 earnings happening in many years. This “profit recession” should continue for the second quarter as well as the current consensus has second quarter earnings also being down from the same period a year ago.

As concerning is that first quarter GDP growth forecasts have moved down to just over 1% annually from the 3% level that was the consensus to begin 2015.

Some of this recent rally can be attributed to early quarterly results stepping over a lowered bar as analysts have been driving down their earnings estimates for months now.

[ad#Google Adsense 336×280-IA]This is a quarterly ritual I call the “analyst two-step” and one reason more than two-thirds of companies beat the consensus almost every quarter.

An ebb to the massive upward trend to the value of the U.S. dollar against other major currencies has also helped, as has the recent rebound in oil from six-year lows.

However, with the market trading at over 18 times trailing earnings at current levels investors should at least be mildly cautious here.

Forward guidance for the next quarter has been conservative so far this earnings season.

Greece looks like it could also be finally heading to a “Grexit” and now that spring has come to Ukraine another offensive by Russian backed “rebels” seems likely.

These events could easily make the market more volatile in the weeks ahead.

What little “dry powder” I am allocating into the market now on any decent dips is going to what I term “Trifecta” stocks. The rare equities these days that still sell at attractive valuations, are seeing solid growth and provide a decent and growing dividend payout. Most of these are found in the large cap growth area. Below are two of these “Blue Chip Gems” which still look good in this overvalued market. 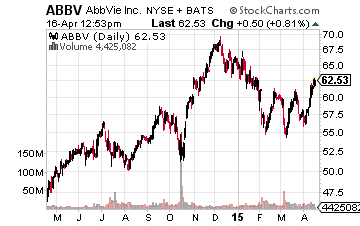 AbbVie (NYSE: ABBV) is a large biopharma company whose stock has recovered now from a brief sell-off triggered by the company’s over $20 billion acquisition of Pharmacyclics (NASDAQ: PCYC) in the first quarter.

Helping the recent rise is some solid trial results from Imbruvica (a blood cancer drug which was the main reason for the purchase) for new indications which should boost sales further if drug is approved for treatment against different conditions.

For yield-hungry investors, AbbVie fits the bill with a juicy 3.5% dividend. Earnings should be up some 30% year-over-year in FY2015 and analysts expect another 20% to 25% rise in FY2016. AbbVie’s main drug Humira will start to lose patent protection in December 2016. However, Humira is a biosimilar which is harder to reproduce than other blockbusters that have come off patent protection in recent years, like Lipitor. Analysts believe Humira should continue to do north of $10 billion in annual sales for many years even as patent protection expires.

AbbVie has other drugs besides Humira and Imbruvica that do between $100 million to $300 million in sales a quarter. These include Viekera Pak, a competitor in the hepatitis C space with Gilead Science’s (NASDAQ: GILD) blockbuster duo of Sovaldi and Harvoni. Viekera should start to rack up $2 billion to $3 billion in annual global sales by 2016. The company also has myriad new drugs in late-stage trials. Investors are paying a cheap 12 times projected 2016 earnings per share on AbbVie right now despite its growth trajectory and high yield. 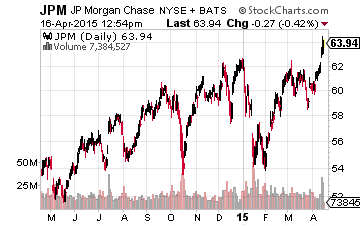 Next up is JP Morgan Chase (NYSE: JPM), which in my mind is the best managed major bank in the industry given the complexity of its various businesses.

The company got particularly strong performance from its investment banking and asset management businesses.

What is impressive about JP Morgan’s performance of late is they have delivered these results despite one of the most repressive regulatory regimes for banks on record. On top of this, hard pressed net interest margins thanks to the flood of liquidity from global central banks is driving down the long term edge of the yield curve. Major banks have now paid more in fines and settlements to various government agencies than their credit losses stemming from the financial crisis and its aftermath.

However, we should have now seen the peak of these actions as the current administration winds down, new regulations have been implemented and major players at the Department of Justice and other government agencies leave for more lucrative positions in private industry.

This should start to bolster bottom line results in the years ahead. For example, earnings in the last quarter would have been 13 cents a share higher if not for regulatory and litigation costs. Provided the domestic economy continues to hold up, interest rates should be higher over the next six to twelve months boosting net interest margins and profits as well.

JP Morgan is doing fine even with these headwinds. After easily passing the recent “stress tests,” the company bumped its dividend payout by 10% and now yields just under three percent. Earnings are projected to move up in the low teens annually over the next few years and the stock is a bargain at 10 times next year’s earnings per share expectations.