The current rally is the most dramatic rise we’ve seen in the buck in the past 20 years.

And, like most big rallies in just about any asset, traders are piling into it in anticipation of further gains.

Take a look at this long-term, monthly chart of the U.S. Dollar Index plotted alongside its 50-day moving average (DMA)… 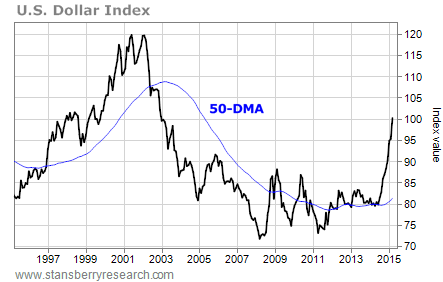 The dollar is up 25% in the past eight months. That would be a terrific gain for a stock – though not uncommon. But it’s an amazing gain for a currency – which tends to be much more stable.

And traders are continuing to pour into the dollar.

Interest rates in several European countries have dipped into negative territory – meaning depositors are now paying banks to hold their funds. Meanwhile, there’s a growing conviction that the Federal Open Market Committee (FOMC) is going to start raising rates here in the United States. So money is flowing out of Europe and into the U.S. That action strengthens the dollar and weakens the euro.

And currency traders are lining up to profit off it. The most popular currency trade on the planet right now is to be long the dollar and short the euro.

But the markets don’t usually reward popular trades. We’ve seen this sort of lopsided currency betting before… And the trades almost always break down.

For example, in May 2010, Greece was threatening to default on its debts. Spanish banks were in trouble. Ireland, Italy, and Portugal were facing liquidity issues. So currency traders were rushing to sell euros and buy dollars. The dollar rallied 7%-plus in May. I warned the trade was going to blow up.

And it did. The dollar fell 10% over the next two months.

The same thing happened in 2011. Greece was once again threatening to default. Spanish banks were in trouble. The European Union was on the brink of collapse.

Traders rushed into the dollar and it gained 5% in May 2011. But it gave up all of those gains in June.

Europe is a mess. The FOMC is looking to raise U.S. interest rates. Traders are piling into the long-dollar/short-euro trade – even after the dollar has experienced its biggest rally of the past 20 years.

If there was ever a situation in which the market had a chance to punish the most traders… this is it.

I told you the dollar was going to break down a few months ago. The dollar has gathered even more strength since then. And it’s possible the dollar could squeeze a little higher in the short term from here.

But with the trade being so popular today… and with the dollar rally so far extended, the most popular trade on the planet is setting up to explode.