You might think – after six STRAIGHT years of gains – that stocks can’t keep going up.

And you might think – with stocks trading at an expensive price-to-earnings (P/E) ratio – that stocks can’t go much higher.

I disagree on both counts. Stocks can still go much higher from here.

For starters, don’t worry so much about where stocks have been.

What’s most important is where we are now, and where we’re going.

You don’t drive by only looking in the rear-view mirror, do you?

You don’t say “Gosh, we’ve been driving on Interstate 10 for 100 miles straight… It has to end soon, right?”

No, it doesn’t… Interstate 10 goes all the way from Florida to California.

Don’t drive looking in the rear-view mirror. And don’t worry that stocks have gone up six years straight. Instead, size them up on their merits now, and look ahead. Today, there are several reasons why stocks can head higher.

Namely, U.S. stocks actually aren’t that expensive – particularly relative to interest rates (which I explained in this recent DailyWealth). But let’s ignore interest rates for a moment. Let’s just look at value by itself.

Stock market bears love to point to the 10-year average P/E ratio (known as the CAPE – or Cyclically Adjusted P/E ratio) as their favorite measure of value, to say that stocks are expensive and that the market has to crash.

These bears say the 10-year CAPE ratio is what Ben Graham, the father of value investing, said was the best measure of value in his legendary 1930s book Security Analysis.

The thing is, that’s not altogether true…

Graham DID NOT say a 10-year average P/E ratio was best. Quoting the book, he said you want to use “the average earnings of a period between five and 10 years.”

Importantly, to Graham, there was nothing magical about using the 10-year number. Graham’s goal was simply to smooth out the business cycle, so your value number would be less volatile and more useful.

If we stick with Graham’s method, but look at the five-year average P/E (as opposed to the 10-year average), we actually see that stocks are cheaper today than their average value over the past 20 years. Take a look: 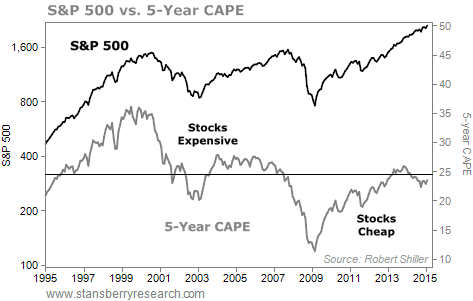 We can’t know the future. But from what I see, stocks still have plenty of room to head higher.