There are really only a few industries in the world that are still pretty much the same today as they were 50 years ago, and just as likely to be relatively the same 50 years from now as well.

It’s this lack of change that can make investing in certain companies attractive, knowing that the status quo will likely remain and profits will likely continue to flow.

One of my favorite examples of this is the rail industry.

See, shipping by rail today is much the same as it’s ever been.

[ad#Google Adsense 336×280-IA]And because it would be practically impossible to build new sizable railroads across the US or other countries in North America, the rail companies already in existence are likely all that’s ever going to be.

Thus, the barrier to entry is about as high as it gets.

One railroad company that has done incredibly well with their entrenched competitive position in Canadian National Railway (CNI).

Moving goods across the country is a necessary and ubiquitous service and as the global economy expands, the need to move more goods will mean that CNI and its railroads are well-positioned to profit.

Speaking of profit, let’s take a look at the last 10 years’ worth of revenue and growth to see just how well this company is running.

Earnings per share, meanwhile, increased from C$1.39 to C$3.85 over this period, which is a CAGR of 11.99%. Really solid results here, which demonstrates the quality and earnings ability of this company.

S&P Capital IQ is predicting that EPS will grow at a compound annual rate of 11% over the next three years, in line with their historical average.

Now, as a dividend growth investor, I’m always interested in not only a company’s ability to share profits with shareholders, but its actual track record of doing so.

They’ve increased their dividend for the past 18 consecutive years, spanning almost two straight decades including the financial crisis.

That qualifies them as a “Contender” on David Fish’s Dividend Champions, Contenders, and Challengers list, which tracks and documents the more than 600 US-listed stocks with at least five consecutive years of dividend increases.

And the dividend has increased at a generous rate of 17.4% annually over the last decade.

That rate is faster than the rate at which EPS is growing, which is obviously unsustainable over the very long term.

However, CNI still maintains a very low payout ratio of just 32.5%, which leaves plenty of room for future dividend raises.

The only drawback to this stock is its low yield, at just 1.44%. Any investors that need income now may find that yield too low for their needs.

One may assume that a railroad company carries a really leveraged balance sheet, but that’s not so here with CNI. Their long-term debt/equity ratio is only 0.58, with an interest coverage ratio of 12.02. These are excellent numbers relative to a lot of major competitors.

This is just a fantastic business. You’ve got great growth, a solid balance sheet, and a dividend that’s growing at a very rapid pace.

Besides the fundamentals, the business model offers about as wide of an economic moat as it can possibly get, with track that crosses Canada, the US, and Mexico, and the ability to ship east-west in and north-south via a T-shaped system that stretches three coasts. And advantages like better fuel economy, timeliness, and the ability to transport bulk commodities gives rail enduring qualities in comparison to other modes of transport, like trucking.

In addition, CNI’s diversification across the product mix is fantastic. For FY 2014, intermodal transport accounted for 24% of revenue; petroleum and chemicals, 21%; grain and fertilizers, 17%; forest products, 13%; metals and minerals, 13%; coal, 6%; and automotive, 5%.

Of course, there are risks to consider. The company is exposed to the broader North American economy and, to a degree, the global economy, so as demand for goods increases and decreases, so will the need to transport those goods. However, the odds are good that shipment volumes will rise over the long haul.

This stock is on the market for a P/E ratio of 22.70, which seems rich in comparison to not only the broader market, but also the five year average of just 16.5.

I valued shares using a dividend discount model analysis with a 10% discount rate and an 8% long-term growth rate. That rate is at the upper end of what I use, but it seems reasonable considering their historical growth, anticipated growth going forward, competitive advantages, and low payout ratio. The DDM analysis gives me a fair value of $54.00, which would seem to indicate overvaluation on par with the P/E ratio discrepancy. 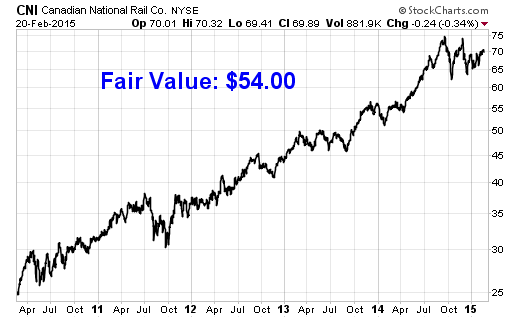 Bottom line: Canadian National Railway (CNI) is a business model with a huge barrier to entry, which strongly limits competition to what’s already in place. Their fundamentals across the board are impressive, including excellent dividend metrics. Though the yield’s a bit low right now, the growth would appear to more than make up for that for any investors with a long-term time horizon. However, shares appear overvalued right now. A more attractive valuation on this stock would quickly shoot it to the top of my watch list.