It has been a mixed bag for large cap tech companies so far in 2015.

IBM Corporation (NYSE: IBM) and Microsoft (NASDAQ: MSFT) posted disappointing quarterly results partly as a result of a strong dollar, something that has been crimping earnings across most American multinationals this earnings season.

[ad#Google Adsense 336×280-IA]The strong dollar is having far reaching impacts on earnings, but not all companies are being negatively affected.

On the flip side, Cisco Systems (NASDAQ: CSCO) posted one of its best quarters in recent years and raised its dividend payout some 10% as well.

And, of course, Apple (NASDAQ: AAPL) posted one of the best quarters in history racking up some $18 billion in profit during the quarter on the runaway success of the iPhone 6.

I believe the technology sector offers some decent value in what I consider an overvalued market.

Here we’ll cover two large tech companies like the ones in my Blue Chip Gems service that are being overlooked by most investors but offer attractive valuations as we go deeper into 2015. 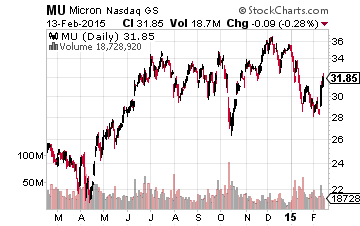 Despite being one of the cheaper stocks in the technology sector as well as one of the more undervalued names in the overall market, Micron Technologies (NYSE:MU) shares have staged a decent decline over the prior three months.

Part of this is due to the choppiness in the overall market during that time frame along with concerns about pricing in the DRAM market where Micron gets some two thirds of its total revenues.

I believe these worries are overblown. The company is starting to be the recipient of positive catalysts of late and a rally in these cheap shares seems to be in the offing. Investors should consider actioning this attractive entry point as I believe the stock will be much higher in the foreseeable future.

The biggest news last week for Micron was that it amended its joint venture agreement with its Taiwanese partner that will allow Micron to gain discounts on this DRAM supply instead of paying market price. This should improve margins and earnings going forward and alleviate some concerns around DRAM pricing that have held back the stock of late.

The company also just entered a NAND/SSD alliance with Seagate Technology (STX) which should provide synergies and advantages to both companies. NAND makes up a little more than one quarter of Micron’s current revenues.

This alliance comes soon after Jefferies upgraded the shares to a Buy with a $42 a share price target. Jefferies analyst notes the stock price has been held down by seven “myths”.

This follows an upgrade by Susquehanna in late January that accompanied a price target hike to $38 a share from $31 a share previously.

These recent positive catalysts are starting push the stock up from the under $30 a share level the shares were selling at just a few weeks ago. I believe we are in the early innings of a sustained rise in the stock of Micron.

The company recently raised $1 billion at 5.25% in long term debt mainly to retire convertible debt lower future dilution and Micron possesses a strong balance sheet. The stock is priced at under nine times forward earnings in a market selling for approximately 16 times forward earnings, and Micron has stronger than average earnings and revenue growth prospects than the overall S&P 500 over the next two years as well.

Micron was one of the inaugural picks in the Blue Chip Gems portfolio when it launched in January. It has moved up nicely above $30 a share since then but this tech stock still has plenty of upside left. 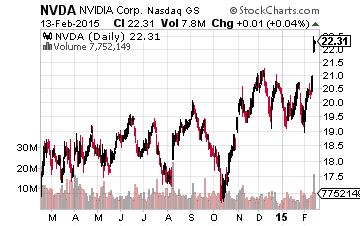 The company reported very solid earnings of 43 cents a share when it delivered its quarterly results last week.

This was 14 cents a share above the consensus and Nvidia also managed to raise gross margins 240bps year-over-year.

Overall revenues increased almost 10% from the same period a year ago, beating expectations by some $50 million during the quarter. Nvidia’s Tegra chipset is gaining traction in the auto “infotainment” space which is hot focus area for tech companies with even Apple looking into getting into the electric vehicle arena.

The stock is at 52 week highs but appears to have further upside. I would look for some analyst upgrades and increased price targets on the back of this strong report.

Nvidia seems slightly expensive at 17 times FY2016’s projected earnings. However, those estimates should also receive upward revisions in coming weeks. As importantly, the company is sitting on some $3 billion in net cash which represents 25% of the stock’s overall market capitalization.

The company bought back some 200,000 shares during the quarter and pays a 1.5% dividend. I would expect those numbers to increase significantly over the next year or two either voluntarily or as the result of activist pressure.

In a market that feels slightly overvalued, both of these chip stocks offer a compelling combination of growth and value.