Investors have seen much more volatility so far in 2015 than they experienced in 2014.

It seems every day the Dow swings up or down 100 points or more as the market reacts to the latest tidbits coming from the commodity and currency markets,

[ad#Google Adsense 336×280-IA]Greece, as well as the latest earnings reports and any hints of when or if the Federal Reserve will start to raise rates this year for the first time in nearly a decade.

The continued strengthening of a dollar is a theme that has carried over from the back half of the previous year.

This trend has had some significant impacts to American industrial and manufacturing companies that get a good portion of their revenue from overseas.

It has been a mixed bag so far during earnings seasons for these sectors as a result. However, there are a couple of American manufacturers that have blown away estimates and are off to a very good start to the New Year. Even better, both stocks are both very cheap compared to the overall market. More upside should lay ahead for both. 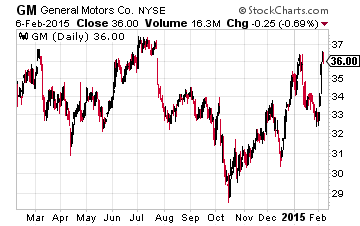 This was a whopping 36 cents a share over the consensus.

Not only did the company post stellar results but it decided to boost its dividend by an impressive 20%.

The stock will now yield a bit north of four percent at current price levels.

Performance increased across all regions except for Europe, which was flat. This performance improvement looks destined to continue. Domestic auto sales in January were strong and average selling prices were up better than five percent year-over-year across the industry. Lower gas prices are driving the amount of higher margin and higher priced trucks and SUVs higher within the overall sales mix.

This will boost earnings nicely all things being equal. With quantitative easing being initiated in Europe, the vehicle market there should improve after a challenging 2014. January auto sales in the United Kingdom posted an almost seven percent gain year-over-year.

Best of all, even after a nice rally the stock is still cheap. The shares go for around 7.5 times forward earnings in a market with an overall multiple of approximately 16 times forward earnings. Add in a better than four percent yield, GM is still a very easy investment decision to pull the trigger on right now. 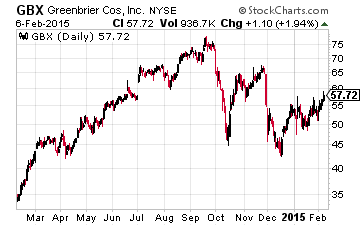 Railcar maker Greenbrier Companies (NYSE: GBX) has also been on the move so far in 2015.

However, even with the recent rally in the stock the shares are down nearly $30 a share from the stock’s recent highs in summer.

As I [noted] in a recent article on Greenbrier, the stock is being unfairly punished on the plunge in crude oil prices.

This is borne out by the company’s latest quarterly submission. In early January the company reported earnings of $1.01 a share, 27 cents a share above expectations. Margins improved better than 500bps year-over-year as production rates continuing to increase.

Much has been made about the falling price of crude on oil tank demand over the long term. It is true that lease rates for oil tank cars have come down some 40% recently, however this does not immediately impact manufacturing or order backlog. In addition, new safety regulations around tank cars mean that over 150,000 current oil tankcars will need to be replaced or retrofitted over the next few years. This will more than make up for any decline in demand for new cars to carry additional oil production.

Greenbrier’s order backlog continues to increase nicely and the company added more than $1 billion in backlog in the back half of 2014. Current backlog is more than two years of production at current levels and capacity across the industry is pretty much spoken for until yearend 2016.

70% of the company’s order backlog is outside of oil tank cars. These include auto carriers, chemical tank cars and other car types whose demand is improving along with an accelerating economy. Greenbrier does not have any international sales to speak of so carries no currency risk which has affected earnings for American multinationals.

The stock is up more than 20% since it was included in Turnaround Stock Report in late 2014, you can read my full report on it here. Earnings should increase over 60% in FY2015 on a revenue boost in the high teens year-over-year.

The shares are still cheap at just over 10 times this fiscal year’s consensus earnings and the shares also pay a 1.1% dividend yield which should receive a substantial boost as earnings rise sharply this year. Oil seems to have bottomed and should boost sentiment on Greenbrier despite the crude price movement’s lack of impact to the company’s actual business fundamentals.

In a market that is seeing increasing volatility and feels at least fairly valued, both of these manufacturers are cheap and on the move in 2015. This upward trend should continue for the rest of the year.