Who are you going to believe? The “King of Bonds” or your mortgage broker?

For years the experts have said interest rates HAVE to go higher. Your mortgage broker probably spent most of the last five years telling you that NOW is the time to refinance.

Instead of listening to your mortgage broker, let’s listen to the “King of Bonds,” Jeff Gundlach…

Jeff’s the founder of DoubleLine Capital and earned his “King of Bonds” title by heading the TCW Total Return Bond Fund – one of the best-performing bond funds of the last decade.

Jeff’s been adamant that interest rates will continue heading lower…

“The 10-year Treasury could join the Europeans and go to 1 percent. Why not? The European rates are at 1 percent. France is below 1 percent right now,” he said recently.

That might seem crazy. But it’s entirely possible. It matches the working script I’ve written about for years…

So far, my script has been so right that’s it’s actually approaching the point of ridiculousness…

No, the Japanese government didn’t default on its debts… That was simply the interest rate on a five-year bond in Japan. Yes, it was zero. No, I am not kidding.

It’s not just Japan… You are welcome to lend your money to the German government for the next five years for no interest. Heck, if you live in Switzerland, you’d consider yourself lucky to earn 0% interest. Five-year bonds in Switzerland have a negative interest rate.

Even worse, the Swiss government’s short-term interest rate is now set at negative 0.75% – meaning that YOU have to pay THEM interest to keep your money in the bank!

Here in America, we think earning 1.70% on a 10-year Treasury bond is terrible… But America is the “outlier.” Take a look… 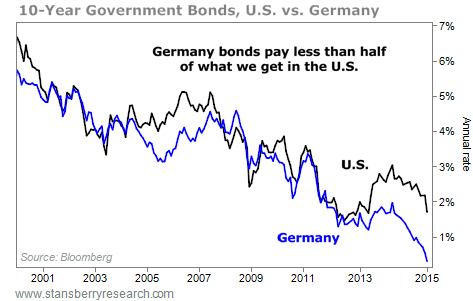 Most Americans think interest rates in America have to go up to go back to “normal.” Your mortgage broker certainly thinks so…

We have serious “deflationary” forces out there… The crashing oil price is just one example. The world economy is simply not doing that well. Governments around the world are trying to fight those deflationary forces by printing money and keeping interest rates low.

The “King of Bonds” thinks this is going to continue. He expects interests to continue lower. And I agree with him.

Who are you going to believe?