“Today may be the very top in the U.S. dollar,” I said on Fox Business two weeks ago.

I was wrong. I need to learn from my mistake…

If you want to get better at investing, you need to analyze your mistakes. That way, you don’t make them again.

So let’s take a look at what I did, and where I went wrong…

It turns out, two weeks ago was NOT the top in the dollar. Instead, the dollar has continued to “go parabolic.” Take a look: 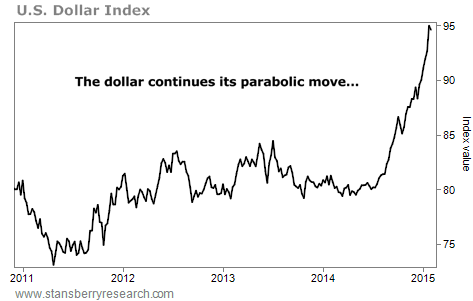 My first mistake was that you never want to fight a “parabolic” move.

[ad#Google Adsense 336×280-IA]Personally, I have had trouble with this one in my career…

When you see an investment soar in an extreme way, the bust is often just as extreme – when it finally arrives.

The trick is when that day arrives.

You don’t want to fight them.

You can lose a lot of money, quickly, by betting against them.

My next mistake was this: You can’t trade “value” or “sentiment” by themselves… Instead, you have to wait to have the trend in your favor.

This should happen soon… But when? I can’t know to the exact day (as I proved on Fox Business!).

It’s smarter NOT to predict the exact day. Instead, you wait…

You use hindsight. When the trend has clearly changed in your favor, then you can make the trade. You might miss the first few percentage points of the move, but it is a much safer way to trade.

In the case of the dollar, I didn’t have the trend yet… I just had sentiment. So I got it wrong.

As a newsletter writer, it might make for a great headline to call the top. But the reality is, you can still make plenty of money – in a much safer way – by waiting for the trend to go in your favor before making the trade.

Hopefully I will do these things the next time around.

I learn more from my wrong calls than I do from my right ones. I strongly suggest you analyze each trade you make, to figure out what you could have done better.

That’s how you get better as an investor… so do it!