“Today may be the very top in the U.S. dollar,” I told Liz Claman on Fox Business’ “Countdown to the Closing Bell” last Friday.

The U.S. dollar has soared over the last several months. And it has now become a crowded trade. I told Liz that no one expects the dollar to fall today… but that’s what I’m betting on.

The absurdity of the U.S. dollar story is showing up all over.

The headline is just one of those classic “signs of a top” in the markets.

Today, investors are flocking toward the dollar to an extreme degree.

It’s not just rich guys with their money in Switzerland. Investors all over the world LOVE the dollar right now. And that’s a problem…

When an asset becomes this loved, this quickly, it usually can’t go up much more… And at that point, it’s ripe for a fall.

That perfectly describes the situation in the U.S. dollar right now. 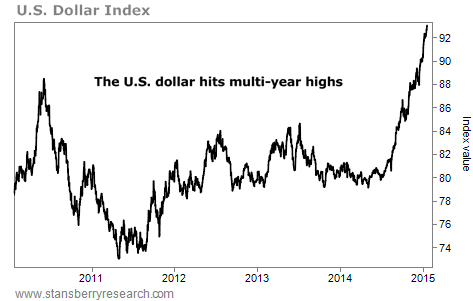 You see, right now, large speculators have more chips bet on the U.S. dollar than any time, ever (yes, ever), based on the latest Commitment of Traders report from the U.S. Commodity Futures Trading Commission.

And U.S. dollar sentiment is at its highest reading ever (yes, ever), according to Jason Goepfert. (Jason runs the excellent SentimenTrader.com.)

Jason wrote about it last week…

It’s not just the fact that these [U.S. dollar] positions have moved to a record [in sentiment] that should raise concern for those long the dollar… It is the fact that the rate of change has increased so much in the past two to three weeks. When we see an increased rate of change at the same time that positons are moving to records, it suggests an urgency that is most often the hallmark of a last-ditch exhaustion…

In short, the U.S. dollar is extremely close to a peak, if we are not already there. The dollar has been moving higher for the last three and a half years… But the long-term trend is ending right now.

I believe the fall started last Friday. But it may start as late as a couple weeks from today.

Even if I’m wrong on timing, the dollar decline WILL start. And that means now is the time to prepare your portfolio.