I have said it many times. When it comes to investing, we are our own worst enemies.

And the years-long bull market we have been in is only making things worse.

[ad#Google Adsense 336×280-IA]If we didn’t already have enough ways to ruin our chances for a decent retirement, new research points to even more subtle ways we allow our feelings, beliefs and sentiments to blow any chances of us getting from here to there.

And don’t kid yourself, everyone does these things.

We can’t help ourselves. Retired persons, because they are driven by an increased level of fear of losing what they worked so hard to put away, are the most susceptible of all to fall prey to these traps.

The first new way to lose it all… house money.

This is when you have made a lot of money in one stock, which is not unusual right now, but your position has become too large in your portfolio and you refuse to take enough off the table to balance it out.

In other words, you feel like you are playing with the house’s money, so it doesn’t matter.

This behavior is the direct result of the bull-market mentality that has developed since 2009. We can’t remember how bad things can be when the market goes the other way.

Remember, it isn’t your money until you take a profit, and I have seen too many profits vaporize when the inevitable market shift happens. And it will!

The worst case I’ve seen of this was a retiring co-worker of mine from when I was a broker. He was doing very well – several million dollars in his portfolio – but he had half of it in the stock of the company he had worked for decades at.

He would not listen to reason and balance it out.

Do I really have to tell you what happened to half of his money?

Next, we read and listen only to ideas that support our beliefs.

This can make for some great political and philosophical arguments, but it will kill your accounts.

I see this most often in emails I get from readers when something I say doesn’t agree with what they think. They’ve incorporated one idea into their thinking and, instead of being open to something new, they believe anything that varies from that idea is wrong.

As investors, we won’t accept something if it doesn’t fall into our idea of what is right or what will work.

And it gets worse.

We build positions around these beliefs, not around fundamentals. That is a disaster waiting to happen. It is just a matter of time. The most common example is confusing political views with research and hard numbers.

The third trap is that a stock will keep moving up because it has been moving up. It’s called recency bias.

This is far too common an error – one most folks make early in their money career. And it costs a lot. Some people recover from the losses, learn from their mistakes and move on. Most give up and go back to cash.

It is easy to assume that because a stock has been hot, it will continue to move up. But the exact opposite is closer to the truth. In fact, I look for stocks that have been moving down for ideas of what will move up.

Energy is a perfect example. Oil is crashing. Even the big names are paying huge dividends – 4% and 5% – but most don’t see it as an opportunity.

But let Apple (Nasdaq: AAPL) or the market’s most recent hot name hit a new high, and get out of the way. The buyers are lining up around the block.

You’re better off looking for the current losers, not the big winners.

And the best new way to really screw up the works is called the blind spot. This one isn’t new to most, but it is a real beauty.

The blind spot is when you can see other people’s mistakes, but not your own. It’s the old brother-in-law syndrome. He is a continual screw up, right? But not you or me!

This behavior is always lurking behind the scenes waiting to eat you up. Most of us are terrible at identifying our own faults, and the bull market mentality is aggravating the single-biggest problems small investors have. We have been right for so long that we can’t imagine we can be wrong.

For novices, it is most likely to occur after a big winner or if all or most of your positions are making money at the same time. We used to call it the water-walker trap.

Believe me, you can be and usually are wrong. Bet on it! 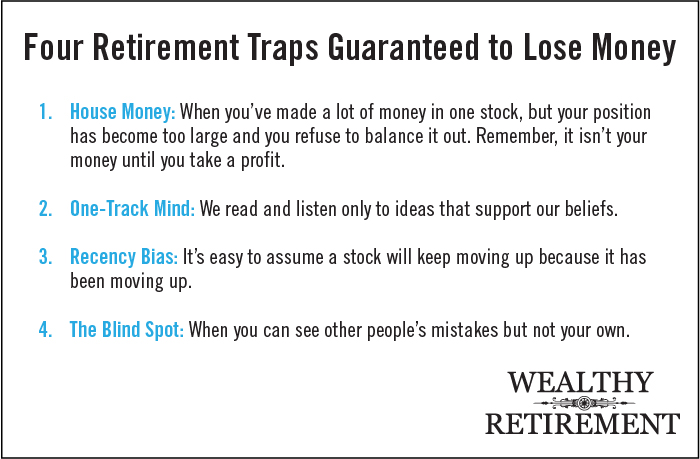 No matter how you look at these behaviors or what you call them, to some degree, pros or novices, we are all victims of these subtle traps – and they all cost money.

The only way to sidestep these pitfalls is with experience and education.

Experience is very costly and most education efforts, according to this past year’s DALBAR report, have been dismal failures.

The DALBAR report is something everyone should read. It says our money behavior is getting worse, not better. And it is happening at the worst possible time, when most people are managing their own retirement money.

In retirement, we have no way of replacing any money we lose. That’s why this constant, growing problem of bad money behavior has reached critical mass in our segment of the population and has to be dealt with.

I wish there were an easy answer to our money decision-making weaknesses, but there isn’t. So, here’s the best advice I can offer:

It isn’t a high-tech or fancy fix, but it will help. And almost all of us really need the help.